Warriors Outlast Raptors 109-104 To Even Series 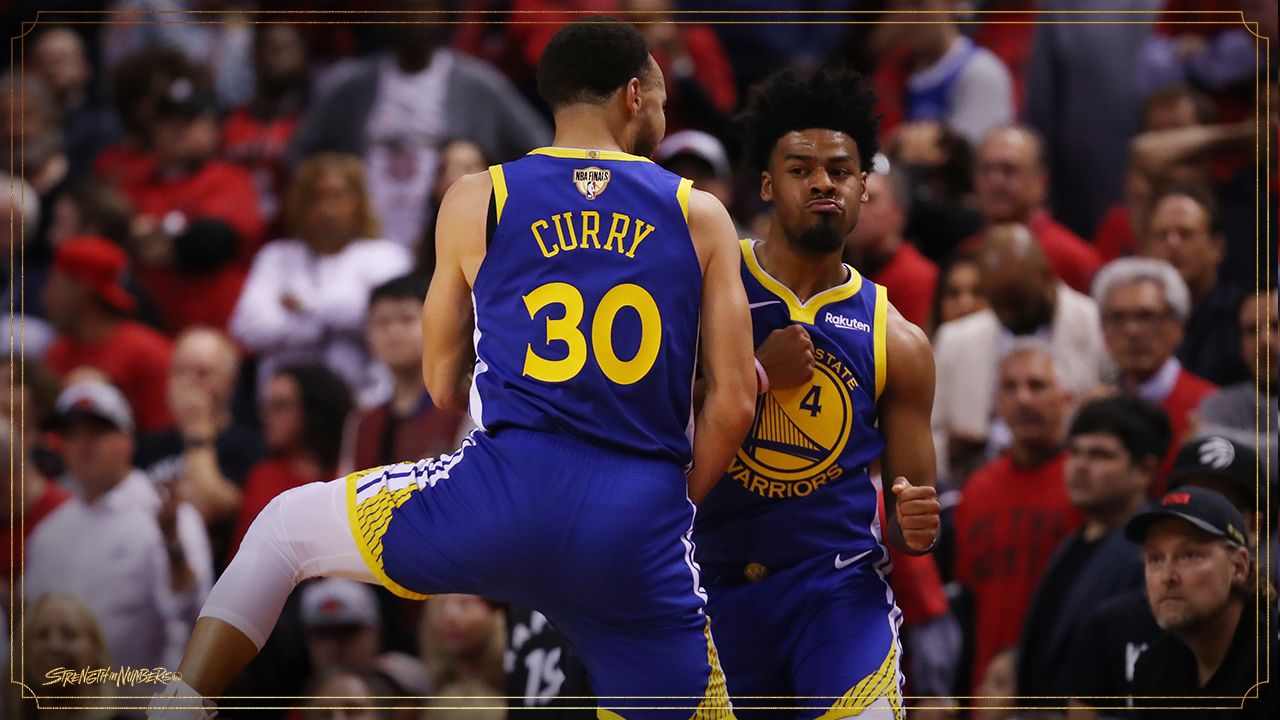 Warriors Outlast Raptors 109-104 To Even Series

The Warriors entered the third quarter of last nights game down five points. Coach Steve Kerr must have gave one hell of a halftime speech because Golden State came out on fire. They held Toronto without any points for the first six minutes of the third, as they went on a 18-0 run to take a 13 point lead. They held onto their lead and survived to escape Toronto with a five point win. The Raptors tried everything in the playbook to get the game close. They even went to a box-and-one style defense to limit the opportunities for Stephen Curry. In the end it was not enough and the Warriors have tied the NBA Finals at one game a piece.

“It was all about our defense,” said Kerr,”we held them to 37% and forced 15 turnovers, and guarded the 3-point line well. It was championship defense and that’s what its going to take.”

The @warriors even up the 2019 #NBAFinals presented by @YouTubeTV 1-1 with 109-104 Game 2 victory in Toronto!#StrengthInNumbershttps://t.co/kNWl82QU5I pic.twitter.com/HQx7SLymG5

Golden State was led by Klay Thompson, who finished with 25 points despite leaving the game with an apparent hamstring injury. Curry added 23 despite early shooting trouble. He started the game going 0-6 from the field before heating up late in the second quarter. The biggest surprise for the Warriors was the play of DeMarcus Cousins, who was inserted into the starting lineup. He played 23 minutes and had 11 points, 10 rebounds, 6 assist, and 2 blocks. Cousins has been hoping for this moment his entire career and stepped up when his team needed him the most. Draymond Green posted his usual game line, finishing one assist shy of back-to-back triple doubles. He was once again the engine that drove the Warriors attack, pushing the pace and creating for his teammates.

The Raptors started the game as they finished game one. They took a lead into the second quarter and went on a run that saw their lead expand to 12 points. They allowed the Warriors to crawl back into the game with untimely fouls and turnovers. Their lead shrunk to five points and then the third quarter run put them behind by double digits. They did crawl their way back into it thanks to the defensive effort of Fred VanVleet who chased Curry around the court. They got it to a two point game in the closing seconds, but left Andre Iguodala open for a game clinching 3-pointer with six seconds left. Kawhi Leonard led them with 34 points, but no other starter had more than 13 points. Game one star Pascal Siakam finished with only 12 points, and was mostly ineffective in the second half.

“I’m really proud of our guys for fighting and battling,” said coach Nick Nurse,”the ball was not bouncing our way at all. Even on that last play Kawhi, who just got three incredible offensive rebounds in a row. They almost threw it right to him on that one, and it got through his hands somehow and then they end up kicking out for that three.”

What's cooler than being cool?! 🥶 pic.twitter.com/CW378SvlEA

Once a the injury bug continues to plague the Warriors. Thompson suffered a hamstring injury and was forced to finish the game from the locker room. Reserve Kevon Looney left the game in the first half with a shoulder injury. The Warriors did not miss a beat as reserves Quinn Cook and Andrew Bogut stepped up and contributed. They combined for 15 points, and came up with clutch shots when Toronto was closing the deficit. The most impressive performance came from Cousins who is returning from a torn quadriceps. He was a key factor in the victory as he came up with many big rebounds down the stretch. He will probably continue to start the rest of the series, and with Kevin Durant getting closer to return, the Warriors may get back to full strength.

The series now heads to Oakland as Golden State stole home court advantage from the Raptors. The next game will be on Wednesday June 5 at 9:00 p.m. on ABC. The Raptors will have to continue their road success if they hope to make this a series. Durant may make his finals debut in the next couple of games, so Toronto may need to steal a game on the road before the Warrior’s star returns.

Siakam Leads Raptors Past Warriors In Game One
Raptors Take Warriors To The Brink Lead Series 3-1
%d bloggers like this: