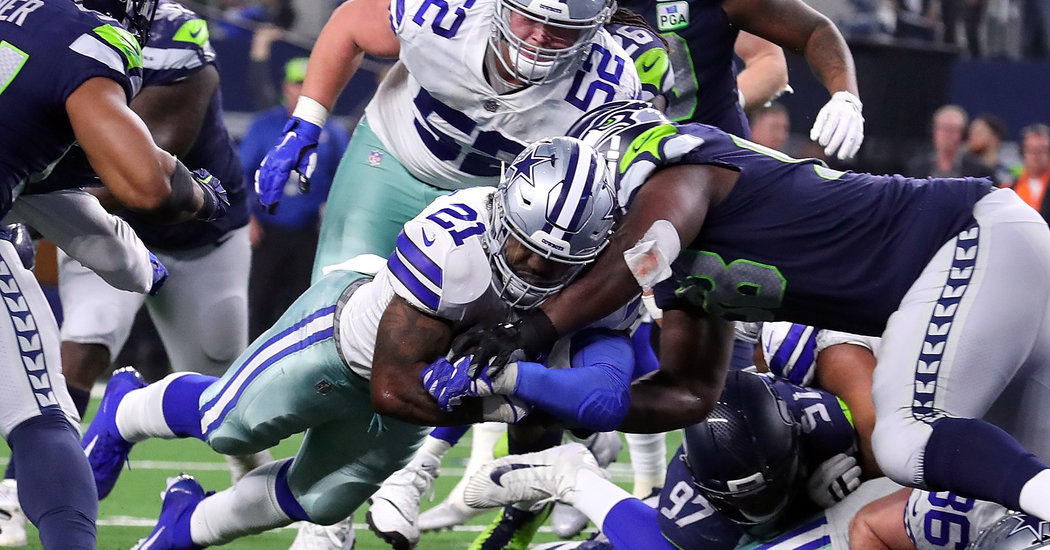 Dallas Cowboys Dominate Seahawks on the Ground in 24-22 Thriller

In what was a close defensive battle for most of the game, the Cowboys were able to come out on top. The Cowboys used a late surge to pull away and secure a thrilling win. The Seahawks had dominated the Cowboys in terms of points throughout the game, until a pair of fourth quarter touchdown runs helped to seal a Dallas win. The game also marked the first playoff win for both Dak Prescott and Ezekiel Elliot. They’ve continued to show that they are one of the best young tandems in the league. The Cowboys will now move on to face either the Saints or the Rams, depending on the result of the Eagles and Bears’ matchup on Sunday.

Keys to the Game

Coming into the game, both teams were essentially expected to run the ball throughout. Most thought that whoever could run the ball the most effectively would emerge as the winner. The Seahawks came in as one of the most run-heavy teams in the league, but were completely shut down by the Cowboys’ stifling defense. Chris Carson, the Seahawks’ leading rusher, was unable to find any running room. Carson finished with 13 carries for a mere 20 yards — amounting to a 1.5 yards per carry average. Despite the poor performance from Seattle’s run game, however, Russell Wilson was able to keep the offense in the game with chunk plays.

Seattle’s defensive weakness, meanwhile, was their inability to stop the run — a lingering issue throughout the regular season. The Seahawks entered the game allowing 113.2 rushing yards per game. Despite placing them in the top half of the league, many feared Seattle would struggle against Ezekiel Elliot. Such fears came true, at least in this game. The Seahawks allowed chunk plays time and time again on the ground. Elliot racked up 137 rushing yards and a touchdown, adding 32 receiving yards as well. With Elliot consistently getting first downs, the offense – and game – opened up for Dak Prescott.

The Seahawks’ play calling was questionable throughout the game. The coaching staff consistently tried to run the ball on first and second downs, but never seemed to earn any sizable gains. Then, on third downs, Seattle predictably deferred to Russell Wilson to convert first downs. This formula led to consistent three-and-outs. Wilson did complete chunk plays every so often, as evidenced by Tyler Lockett’s four-catch, 120-yard stat line. The Seahawks tried to establish the run before finding themselves down ten points in the fourth quarter. Once they committed to the pass, they finally were able to break their scoring drought and catch up to Dallas. At that point, though, their efforts were too little, too late.

What it Means Going Forward

The Seahawks will now look to next season after this disappointing loss. This season should not be seen as a disappointment, though. Many pegged the Seahawks to be a bottom-dwelling team that was facing a full rebuild. Seattle defied what most expected, as they rallied after an 0-2 start to finish the season 10-6. They should look to retain unrestricted free agents Frank Clark, KJ Wright, and breakout receiver Tyler Lockett. The front office should also look to add veteran pieces to the secondary and offensive line, in order to compete next year.

The Cowboys, meanwhile, now turn their attention to the NFC Divisional Playoff round — with an opponent yet-to-be determined. They will face a tough matchup either way, however. The NFC’s top seed is the New Orleans Saints, while the number two seed is the LA Rams. Dallas will rely on Ezekiel Elliot to lead the team, as they have all season, regardless of opposition. The Dak Prescott-to-Amari Cooper connection will certainly need to be sharp as well, as the Cowboys have to topple an NFC powerhouse regardless of which team they end up facing. The Cowboys defense, led by linebackers Leighton Vander Esch and Jaylon Smith, will need to limit the Saints or the Rams’ running backs to keep Dallas in the game.