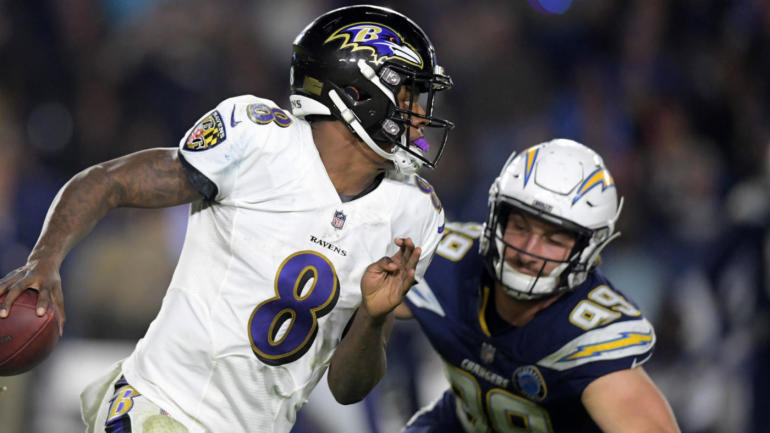 Los Angeles Chargers and Baltimore Ravens Prepare For Round Two

The 2019 NFL Playoffs are finally here as the fifth seed Los Angeles Chargers travel to M&T Bank Stadium to take on the fourth seed Baltimore Ravens. Is anyone feeling a weird sense of déjà vu? We thought so.

The Week 16 matchup between these two teams was one-sided as the Ravens secured a 22-10 victory over the Chargers. The Ravens’ defense held the Chargers to less than 200 total yards in the matchup and forced two turnovers in the matchup. That being said, who gets the edge in round two?

One thing that goes unnoticed about this Los Angeles Chargers team is that they have been road warriors throughout the season. In fact, this team is 7-1 on the road this year, with the only loss coming against the first seed Los Angeles Rams. Some of the Chargers’ road victories include the Seattle Seahawks, Pittsburgh Steelers, and Kansas City Chiefs.

Despite finishing the regular season with a 12-4 record, the Chargers won’t have the luxury of a home game. However, for this Chargers team, maybe that isn’t a luxury at all. The last road Wild Card matchup for the Chargers was a 27-10 victory against the Cincinnati Bengals.

In contrast, the Baltimore Ravens have had a bevy of their success at home. The Ravens boast a 6-2 home record this year. Losses stem from a heartbreaking one-point loss to the New Orleans Saints and a seven-point loss at the hands of their division foe, the Pittsburgh Steelers.

The Ravens have been even more dominant at home as of late. The last road loss for the Ravens was in Week 10. As a starter, Lamar Jackson is 4-0 at M&T Bank Stadium.

The Los Angeles Chargers look to play the ultimate chess match as they game plan for the Baltimore Ravens for a second time this season. The two-week turnaround doesn’t leave much time for the Chargers to prepare for the Ravens’ unique rushing attack. However, if the Chargers prepare well, they will have a gauge on the concepts they could possibly see again from Baltimore.

If the Chargers want to win this matchup, they can’t let Lamar Jackson dictate the game. Jackson brings explosiveness to the Ravens’ offense in a variety of ways: the veer option, the read option, and the play-action. The Chargers must let running backs Gus Edwards and Kenneth Dixon do the heavy lifting and make Jackson a non-factor.

Rivers and the Chargers’ offense must also do their job and not put the defense in tough situations. The Chargers will need to win the turnover battle if they really want an edge over the Ravens. Giving up a first-play interception or a defensive touchdown isn’t the recipe for success for this team.

The Ravens have played really incredible football as of late. They also have the advantage of already knowing what it takes to win against this Chargers team. However, the Ravens have some coaching points they can take into the matchup.

The one thing that is keeping this good Ravens team from being great is red zone efficiency. Baltimore was fourth in the league in red zone-touchdown percentage going into Week 10 of the NFL season. Yet the Ravens just finished the regular season ranked a mere 20th in the same category.

It is vital that the Ravens turn this around fast. The offense has no problem moving the ball down the field, but Justin Tucker won’t be able to win the game on his own when the team can’t capitalize. If Baltimore can punch the ball in the end zone once within the 20, they will be unbeatable.

The Los Angeles Chargers have finished up an incredible regular season. Yet that doesn’t seem to always be the best thing for this Chargers team. The last time the Chargers had a season this good was in 2009 when the team went 13-3. They failed to win a playoff game that season.

In contrast, history says great things are to come for this Ravens team. The last time the Ravens won the AFC North, they also won the Lombardi Trophy. That playoff run was sparked through Ray Lewis and his “last ride.” This time around, a quarterback by the name of Lamar Jackson has breathed life into this football team. Can history repeat itself for the Ravens?

The Most Important Player For Each NFC Playoff Team
Wild Card Round: Dallas Cowboys vs. Seattle Seahawks Preview
%d bloggers like this: