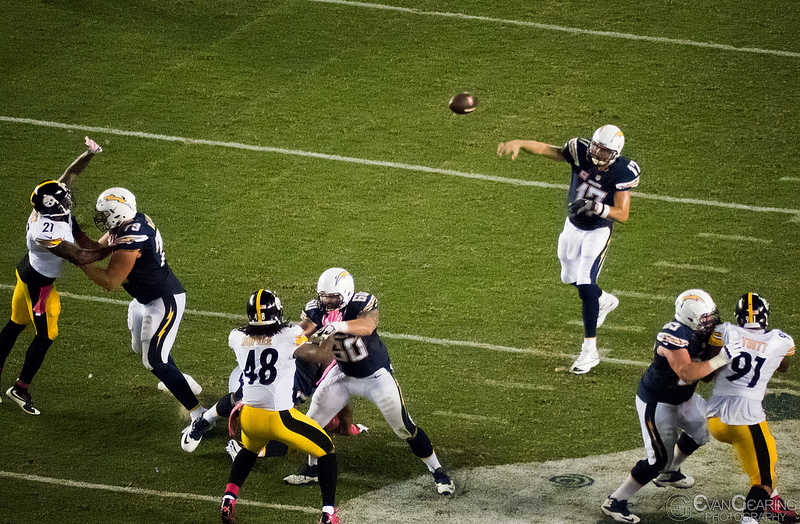 The Pittsburgh Steelers appeared to have this game put away at halftime, but a few bad officiating calls and a complete meltdown on defense gave the game to the Los Angeles Chargers. The Chargers scored two touchdowns on badly missed penalties and the third one on a batted ball in the end zone.

The Chargers capitalized on every possible miscue and stole one on the road winning 33-30.

Keenan Allen was utilized early lining up in the slot nearly every play to get favorable matchups against linebackers. Allen was responsible for all of the 42 yards on the opening drive that ended with a missed 52-yard field goal by Michael Badgley. The Steelers wasted little time going 58 yards on four plays for the first touchdown of the game. Following a 46-yard completion to Antonio Brown, James Conner punched in a one-yard touchdown run putting the Steelers up 7-0.

Pittsburgh got the ball back and marched down the field to score once again. Aided by a 28-yard pass interference penalty, the Steelers drove 48 yards ending with another one-yard touchdown by James Conner. Kicker Chris Boswell missed the extra point giving Pittsburgh a 13-0 lead.

On the ensuing drive, the Chargers scored on a 46-yard touchdown pass to Travis Benjamin that was quite controversial. The Chargers right tackle clearly moved early which should have negated the Chargers’ touchdown. Following the extra point, the Steelers were still on top 13-7 to end the first quarter.

Pittsburgh started the second quarter driving 53 yards downfield before turning the ball over. The Steelers got to the Chargers’ 22-yard line before Ben Roethlisberger threw a terrible pass that was intercepted by Derwin James.

Following some great defensive stands by both teams, the Steelers’ special team unit came up huge with a blocked punt. Pittsburgh took over at the Chargers’ 34 yard line and missed a big shot to increase the lead. Roethlisberger missed a wide open receiver down the middle of the field that would have been an easy touchdown. Pittsburgh settled for a 48-yard field goal giving them a 16-7 lead.

After a Chargers punt, Pittsburgh once again came up big and scored quickly before halftime. With 1:35 left in the half Pittsburgh drove 91 yards downfield capping the half off with a 28-yard touchdown to Antonio Brown. The Chargers ran the clock out and went to halftime down 23-7.

Antonio Brown had six receptions for 117 yards and one touchdown before halftime.

Following an opening drive punt by the Steelers, Los Angeles put together an impressive drive going 13 plays for 88 yards and taking over eight minutes off the clock. The Chargers’ luck continued as a pass to the end zone that looked to be intercepted was knocked into the air by another Steelers player and caught by Keenan Allen for the touchdown.

The Chargers went for a two-point conversion and converted it making it 23-15 Steelers.

Pittsburgh failed to do anything on the following drive and punted back to the Chargers. Returner Desmond King would light a spark for the Chargers returning the punt 73 yards for a touchdown. Los Angeles went for two once again, and Rivers converted to Keenan Allen knotting the score at 23-23.

This quarter could not get any better for the Chargers as the Steelers’ offense would go three and out to set up a go-ahead drive for Los Angeles. The Chargers continued their hot streak driving 79 yards down the field scoring on an 18-yard touchdown run by Justin Jackson.

Following the extra point, Los Angeles took its first lead of the game up 30-23. The Steelers finally woke up and responded with their own 78-yard drive that ended with a ten-yard touchdown pass to rookie running back Jaylen Samuels.

Samuels came in for James Conner who appeared to injure his right ankle during this drive. Boswell nailed the extra point to tie the game at 30-30. On the ensuing drive, Los Angeles drove all the way to the Steelers’ 21-yard line before back to back offsides penalties made them attempt a 29-yard field goal to win.

Michael Badgley drilled the game-winner giving the Chargers a miraculous 33-30 win on the road.

The big star for the Chargers tonight was wide receiver Keenan Allen who absolutely torched the Steelers’ defense. Allen recorded 14 receptions 148 receiving yards one touchdown and a two-point conversion giving him 22.8 fantasy points on the night.

Philip Rivers also had a solid night throwing for 299 yards two touchdowns giving him 23.96 fantasy points on the night.

One surprise was running back Justin Jackson who filled in for an injured Melvin Gordon and a struggling Austin Ekeler. Jackson finished the night with nine touches 82 yards one touchdown and 14.2 fantasy points.

Although Pittsburgh lost, they did have some special fantasy performers tonight. Antonio Brown went off recording ten receptions 154 yards one touchdown and 21.4 fantasy points. James Conner struggled to get yardage but scored twice giving him 19.4 fantasy points on the night.