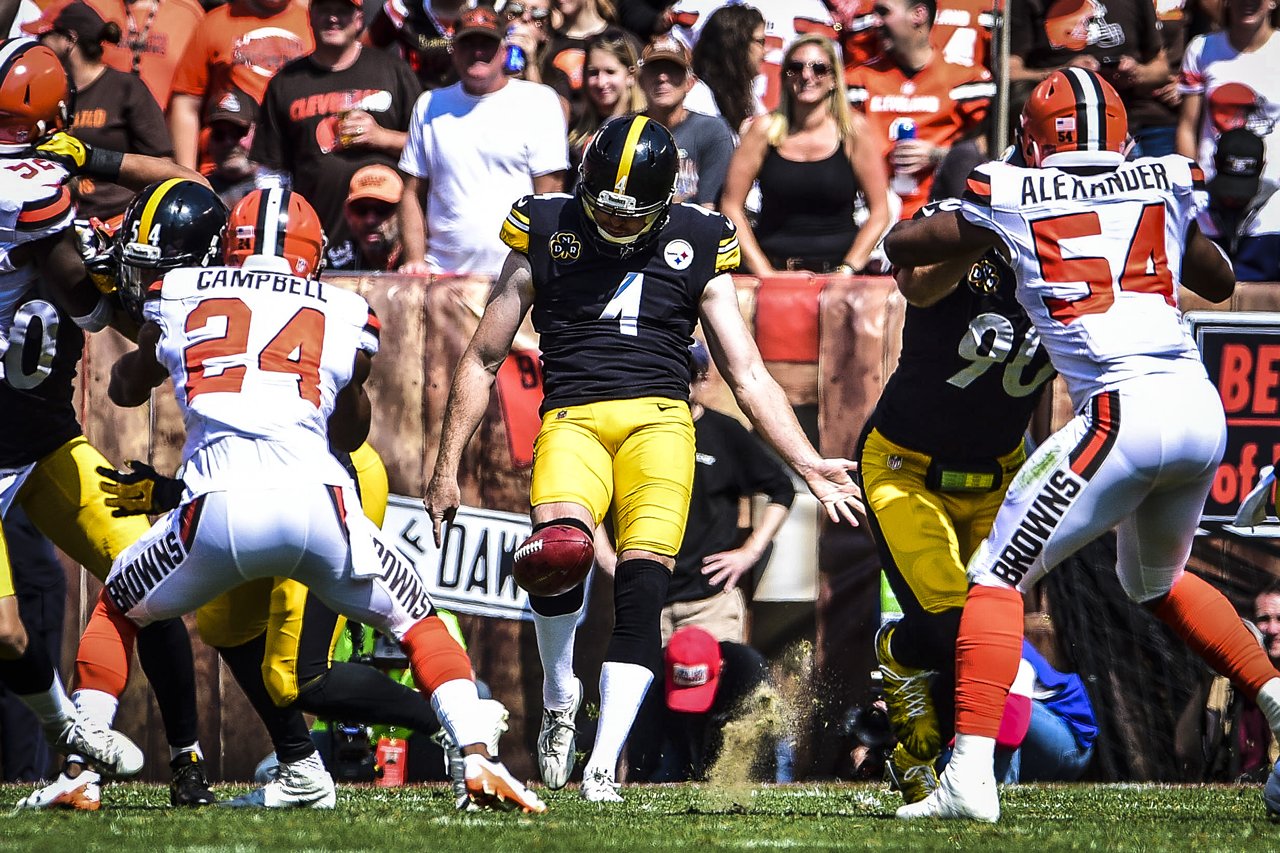 Photo credit to Steeltownusa.com via Flick

Week 1 of the NFL season kicked off with the Pittsburgh Steelers visiting the Cleveland Browns. This marks their first meeting of their two yearly match ups. This series has been dominated by the Steelers as of late, however this years Browns team seems to be the best they have had in years. This game between AFC North rivals took place in terrible weather conditions which made for an interesting game. Who survived the torrential downpour? Maybe both.

With no Le’veon Bell for the Steelers, the offensive unit started off the game a little slow. The Steelers first three drives resulted in 2 punts and an interception. Ben Roethlisberger was intercepted by Browns number 4 overall pick Denzel Ward. Pittsburgh’s QB was off his game today as he committed 3 turnovers in the first half of this game. What helped to counter their QB’s struggles was the ability to get the ball to Bell’s replacement James Conner. Although he had a slow start Conner turned it on in the second quarter.

Conner got his first career NFL touchdown at the 11:16 mark in the second quarter. This was the games only score of the first half. The best part of the game for the Steelers was their defense. The starting defense held Cleveland to a total of 83 yards and 0 points in the first half. Steelers second year starter T.J. Watt was a monster among men in this game dominating the line of scrimmage and leading the Steelers with 4 sacks.

T.J. Watt is the first #Steelers linebacker since 2015 to have a three-sack game. pic.twitter.com/VXWUvymVMP

The Cleveland Browns offense was abysmal to start this game. Cleveland ended every drive they had with a punt in the first half. It appeared as QB Tyrod Taylor was out of sync with his receivers causing a lot of incomplete passes and missed opportunities. Cleveland’s running game was slow out of the gate as their offensive line was dominated by the Steelers early. The Browns defense looked good in the first half intercepting three passes from Roethlisberger. Getting these turnovers kept the score 7-0 heading into halftime. Rookie corner back Denzel Ward was impressive going toe to toe with Steelers star wide receiver Antonio Brown. Ward him to 2 receptions for 14 yards and coming away with 2 interceptions.

The Steelers first two offensive possessions of the second half went for touchdowns. The first scoring drive was dominated by a 67 yard gain by JuJu Smith-Schuster capped off by a 22 yard touchdown grab by Antonio Brown. The second offensive possession for the Steelers was the James Conner show. Conner had all 39 yards on the drive going untouched into the end zone for his second score of the game. Unfortunately the Steelers never scored again as the offense fumbled two more times in the half.

The Steelers defense started the second half by giving up a 10 play 86 yard touchdown drive. That touchdown tied the game at 7-7 right out of the gate. The Steelers turnovers continued to put the defense in bad situations. The worst of all was at the 7:32 mark in the fourth quarter where the defense was put onto the field with the Browns starting from the Steelers 1 yard line. The Browns ended up punching it in and inching the score closer. The defense did its best but ultimately gave up the lead with 2 minutes left in the game causing this game to go to overtime.

A second helping of 6️⃣ for @JamesConner_. pic.twitter.com/apgWz564A2

This half of football went much better for the Browns because of the Cleveland ability to establish the running game early. The first drive of the half went for 86 yards and a game tying touchdown. The browns defense forced the Steelers into a fumble gaining possession of the ball at the one yard line. Due to the field position running back Carlos Hyde ran through the line with ease to score the second touchdown for the Browns. The Browns third touchdown in the second half came with quarterback Tyrod Taylor attacking backup corner back Cam Sutton because Steelers starter Joe Haden exited with a hamstring injury. This drive was two plays for 55 total yards and a game tying touchdown.

The Browns defense owned this half and really turned the tide of this game. The defense limited the Steelers to 190 yards and 14 points through 8 possessions. Browns star defensive end forced two fumbles in this half and created havoc all game ending with 2 sacks. The Browns came together when it counted and tied the game with two minutes left sending this game into overtime.

Overtime was filled with a bunch of ugly football because of the inclement weather that was pounding the area all game. Both the Steelers and Browns exchanged punts until the Steelers marched downfield to the browns 24 yard line giving their kicker Chris Boswell a chance to win the game from 42 yards out. Boswell lined up and pulled the kick left giving the Browns another chance to finally win one for the home crowd. After a 3 and out by the Browns the Steelers coughed the ball up one more time when Roethlisberger was sacked by rookie linebacker Genard Avery followed by a return to the Steelers 24 yard line all but sealing the win for the Browns.

As they lined up for the 43 yard field goal the rain continued to pour making the situation tense for everyone involved, the snap was good, hold was good, the kick was blocked by none other than Watt who continued to show out in an impressive opener for himself. The Steelers had one more play after the block which ended up being incomplete ending the game in a 21-21 tie, being the first week 1 tie in the NFL since 1974. In what felt like a very sloppy game of football you can imagine a tie for the Browns felt more like a win, and a tie for the Steelers feels more like a loss heading into week 2.

"Hell yeah it feels like a loss" — Cam Heyward

The big winner was James Conner who ended the game with 192 total yards and 2 touchdowns. It appears as long as Bell misses games James Conner will be a go to option for this offense. Quarterback Taylor put up solid numbers with 197 passing yards 77 on the ground and 2 total touchdowns. The Steelers quarterback struggled mightily in this game. Although he had 335 yards the QB had 5 total turnovers and only 1 touchdown. This wraps up our Steelers vs Browns Week 1 Review, be sure to check out our other reviews.

Photo credit to Steeltownusa.com via Flick