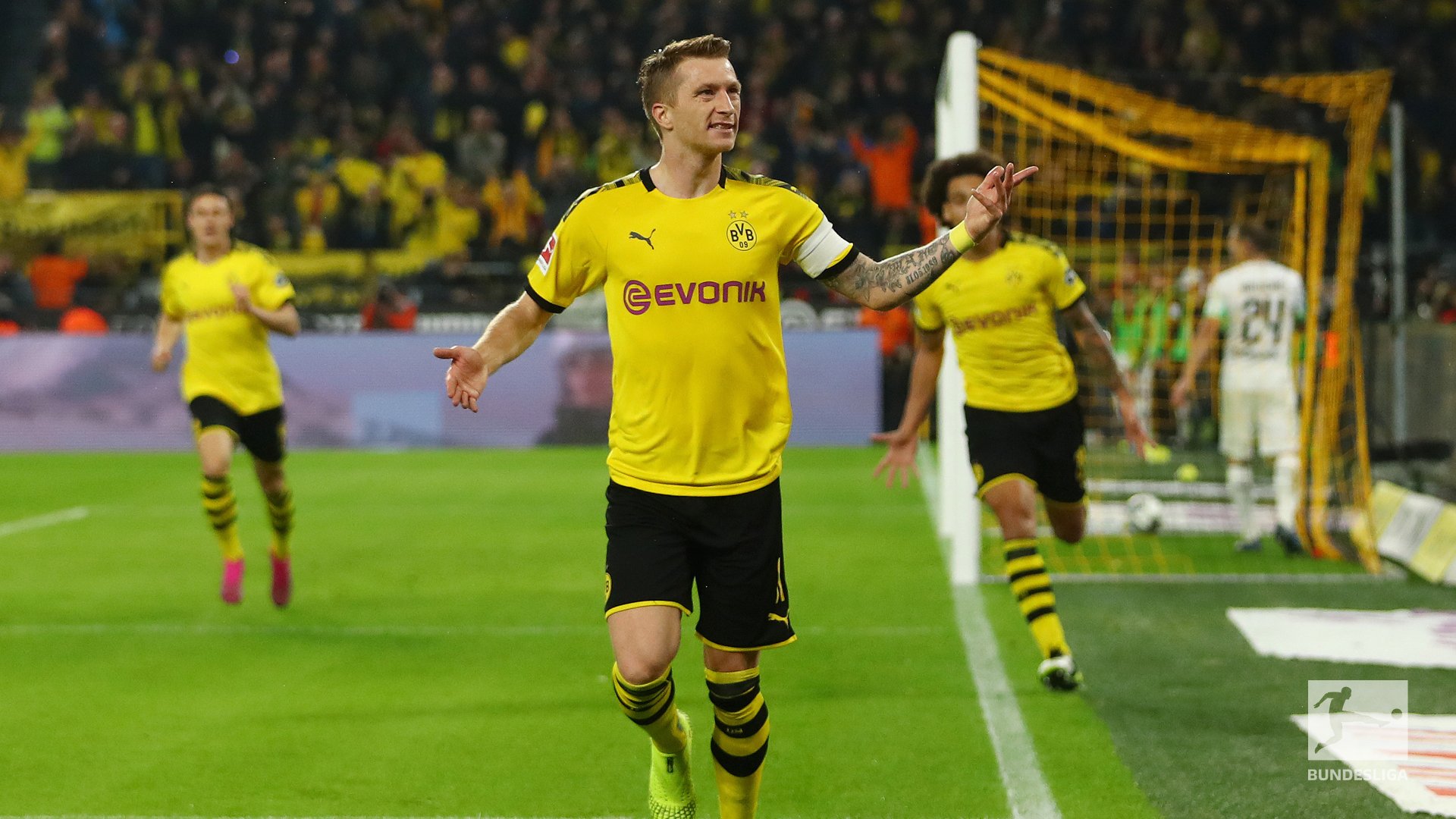 The Dortmund midfielder coolly slotted the ball past Yann Sommer in the Gladbach goal 12 minutes into the second half.

Lucien Favre’s side had some nervy moments late on but held on for a vital victory, which ignites their title challenge.

They move just one point behind Monchengladbach, who despite the defeat, remain top of the table for 24 hours at least.

The big story ahead of the game was the decision from Dortmund boss Lucien Favre to drop Jadon Sancho from the squad because the midfielder arrived late from international duty with England.

German midfielder Julian Brandt came in to replace him.

Borussia Monchengladbach started on the front foot and almost opened the scoring after just four minutes. A header from defender Tony Jantschke looked to be heading into the net. However, Dortmund midfielder Marco Reus made a superb block to deny him.

On 11 minutes, a wonderful move almost led to Dortmund taking the lead. Marco Reus played a brilliant no look pass to Julian Brandt. The German midfielder unleashed a shot from close range, which was well saved by Yann Sommer in the Gladbach goal.

Midway through the first half, Monchengladbach should have taken the lead. A free kick swung in was flicked on by Alassane Plea to Stefan Lainer at the backpost. The full back smashed a volley towards goal but it was brilliantly saved by Roman Burki in the Dortmund goal.

A few minutes later, a superb save by Yann Sommer kept the sides level. A corner by Thorgan Hazard found Mats Hummels who’s header was tipped wide by the Swiss goalkeeper.

Moments later, Dortmund thought they had taken the lead. A shot by Hazard from the edge of the box took a big deflection off Oscar Wendt. It deceived goalkeeper Yann Sommer who got a fist to the ball but could only palm the ball into his own net.

However, following consultation with VAR, the referee ruled the goal out for an offside in the build up to the goal.

The decision was extremely tight, with Marco Reus appearing to be only inches in front of the Monchengladbach defender.

Dortmund started the second better and took the lead after 57 minutes.

Julian Brandt found Thorgan Hazard midway inside the Gladbach half. The Belgian played a brilliant through pass to set Marco Reus in on goal. The German international then coolly slotted the ball through the legs of Yann Sommer to give Die Schwarzgelben the lead.

On 70 minutes, Dortmund were forced to replace goalkeeper Roman Burki who injured himself while trying to punch a cross away with Marwin Hitz coming on to replace him.

Minutes later, Hitz should have been picking the ball out of his own net, as Monchengladbach squandered a golden chance to equalize.

A great through pass from Denis Zakaria found Marcus Thuram out wide. He pulled the ball back across the box to substitute Patrick Hermann, who under pressure from Dortmund defender Mats Hummels, was unable to divert the ball into the net.

On 84 minutes, Dortmund were once again denied by VAR. Achrat Hakimi cut the ball back to Julian Brandt inside the box. The German midfielder curled the ball into the net and looked to have sealed all three points.

However, Marco Reus was standing in an offside position and was adjudged to have impeded Yann Sommer’s view of Brandt’s shot.

Monchengladbach were pushing forward looking for an equalizer. With two minutes remaining they should have been level.

A terrific cross from Stefan Lainer found it’s way through to Florian Neuhaus at the backpost. However, he was somehow denied from close range by Marwin Hitz who pulled off a superb save to deny him.

Dortmund Hold On For Vital Win

This was a huge result for Borussia Dortmund and will help ignite their title challenge.

Lucien Favre’s side had started to pick up an unwelcome habit of throwing away leads and dropping points in the Bundesliga title race.

In their last three Bundesliga games, they were unable to turn leads into three points and had to settle for three draws in succession.

This time they were able to hang on. There were some nervy moments and at times they looked very unconvincing. Lucien Favre can thank subsitute goalkeeper Marwin Hitz who pulled off a fantastic save late on.

Despite the victory, there are still big question marks over their defense. It still looks very vulnerable and if Dortmund are to mount a challenge for the Bundesliga title, they will have to tighten up their backline.

They have the firepower up front to cause teams problems. However, like last season that may not be enough to give them their first Bundesliga title since 2012.

Despite the defeat, their will be a number of positives for Monchengladbach boss Marco Rose.

They pushed Dortmund all the way and can count themselves unfortunate not to come away with a point.

Throughout the match they were a threat, especially on the counter attack.

Monchengladbach have some quality players including the likes of Marcus Thuram, Alassane Plea and Denis Zakaria. Meanwhile, fullback Stefan Lainer posed a threat out wide throughout the second half.

The Bundesliga is so tight so far this season and is incredibly unpredictable. You would expect Monchengladbach to be pushing for a Champions League spot at least. However, the way the season is going, they could well surprise a few by finishing higher.

Next up, for Gladbach is a trip to Italy to face Roma in the Europa League.

Meanwhile, Dortmund also face a trip to Italy to face Inter in the Champions League.