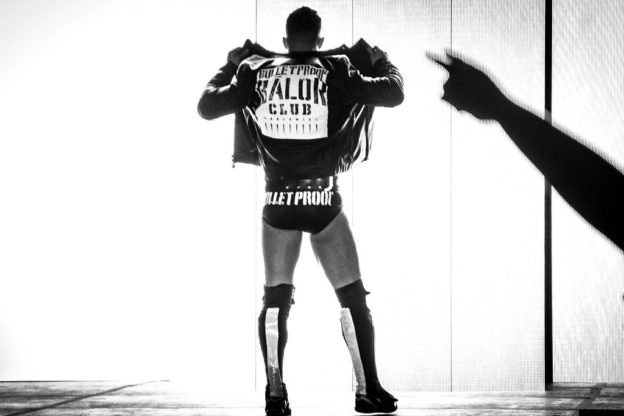 Finn Balor, aka Prince Devitt (in NJPW), was the longest-reigning NXT champion (with 293 days); the first co-winner of the inaugural Dusty Rhodes Tag Team Classic Tournament with then tag team partner Samoa Joe. He was the first Universal Champion and the first-ever superstar in WWE history to win the “World Title” on a debut Pay per View, but sadly his title reign was cut short due to a shoulder injury which keeps him out for over 6 months.

The Demon can’t fly out of the Dark Tunnel…

Ever since the Demon came back from injury, the management hasn’t seen him as a fit to the Universal Championship picture, just like Bray Wyatt, Braun Strowman, Bobby Lashley and his NXT tag team partner Samoa Joe; all are back in a mid-card level and feuds one another.

Why the sudden change of hearts in the WWE higher-ups?

The reason is during his in-ring return; WWE is going with the Roman Reigns must beat Brock Lesnar first no matter what; he then cuts The Demon persona and he just comes out to Raw weekly as the regular “Finn Balor”. He finally got his deserving Universal Title rematch in 2018 Summerslam, the title he didn’t lose in the first place, with the newly crowned Champion Roman Reigns; but failed to capture the title back. After that he was sent back to the mid-card, feuding with Jinder Mahal and the first to be eliminated at the Survival Series.

In 2019 Royal Rumble, Balor finally gets another chance at the Universal Title; this time with the Beast Incarnate Brock Lesnar, but still fails to beat the beast because it is Reigns’ Shield Brother Seth Rollins’ time to slay the beast, not the Demon to devour it. Months of many fails and losses, the Demon King finally captures not the Universal Title but The 2nd most prestigious title: The Intercontinental Championship from Bobby Lashley.

The Demon King had a handful of successful title defenses until he lost clean to Shinsuke Nakamura in a non-title match on Smackdown Live; then lost the Intercontinental Championship title to Nakamura again at the WWE’s Extreme Rules kickoff show. The next night he was attacked by the returning Bray Wyatt; to set up a match between Balor vs the Fiend at Summerslam. In which the WWE Universe will witness The Irishman getting pin by the Fireflies Fun House’s Protector: The Fiend; temporarily written him off from WWE because Balor requested 2 months hiatus from work to recharge himself.

TSJ Writer Andrew Aung: How Balor should return after he is fully recharged!

Since Balor is from Smackdown, and even though he is the founder of the Bullet Club; joining Aj Styles and The Good Brothers on Raw won’t get him back on the World Title picture. What he should do is to go to the 205Live and win the Cruiserweight Championship title. It’s more like going back to his old days as Prince Devitt in NJPW. Though this move may look like a step down for Irish Prince but will benefit both him and 205Live programming. Since Vince McMahon already let main roster stars compete in NXT; why not let the Demon King devour 205Live division first.

Finn Balor can bring back life in 205Live!

So when he’s fully “recharged”, all he needs to do is to become like Neville in 205Live, and then go to the next level that Neville didn’t get the chance; that’s going back to the main roster as the Cruiserweight Champion and challenging Smackdown Heavyweight Champion whoever it may be. By that time, I hope either Kofi or Aleister Black because I think Raw’s Universal Champion isn’t going anywhere until Roman Reigns becomes 10 times champion.

So it’s fitting for him to go for the Smackdown Heavyweight Title; that’s the only way he is getting the Demon’s energy back.

Photo Credits to R_O_B_O via Flickr.com