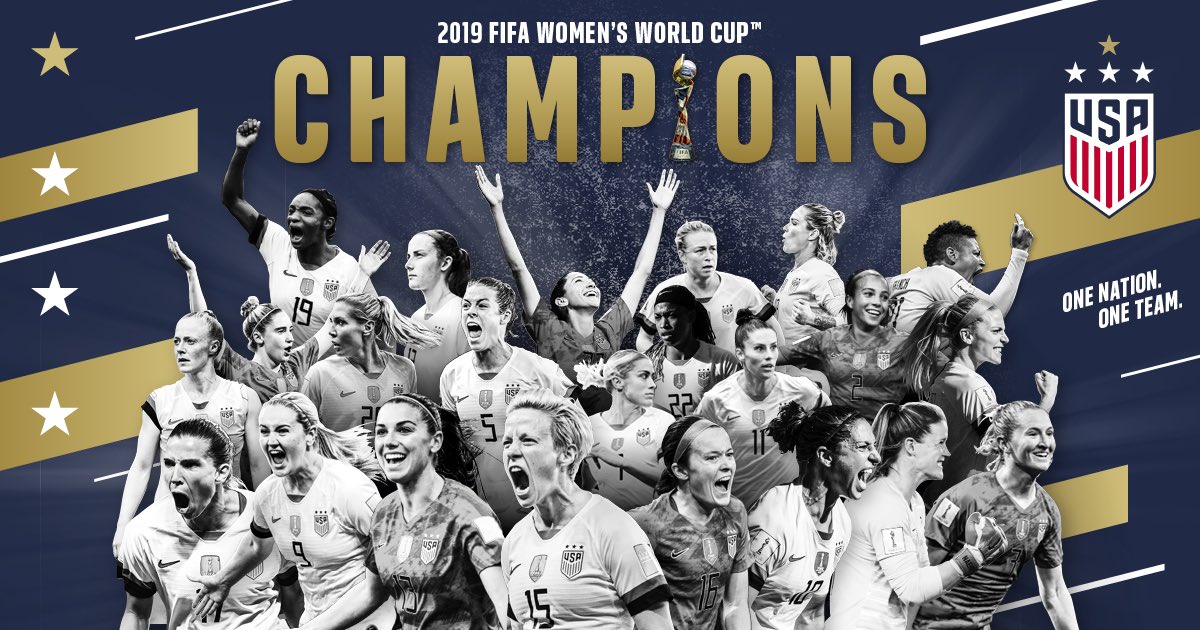 Two-second half goals helped the USA retain their Women’s World Cup crown, as they defeated the Netherlands in Lyon.

A penalty from Megan Rapinoe and a superb individual goal from Rose Lavelle helped the USA win a fourth Women’s World Cup.

The USA throughly deserved their victory. Only heroics from Dutch keeper Sori van Veenendaal kept the Netherlands in the game.

Jill Ellis’ side became only the second country to retain the Women’s World Cup after Germany who did it in 2003 and 2007.

They were a class apart throughout the tournament. Even though they had some nervy moments against France and England in the quarters and semis.

For the Netherlands, they struggled to create any chances and were second best throughout. However, they are one of the emerging nations in women’s football and will look at retaining their European crown in two years time.

USA started on the front foot and were controlling possession in the early stages. However, they were struggling to create any clear cut opportunities.

For the first time in the competition, the States failed to score inside the opening 12 minutes.

The Netherlands were defending superbly, defending in numbers and making it hard for the USA to breakthrough.

It took 27 minutes before we had the first shot on target. A corner swung in by the USA eventually found its way through to midfielder Julie Ertz. She smashed in a volley from inside the penalty area, which was palmed away by Sori van Veenendaal in the Netherlands goal.

USA were beginning to ramp up the pressure on the Netherlands defense. On 37 minutes, a brilliant cross by Megan Rapinoe found Tobin Heath but her header was brilliantly saved by van Veenendaal.

A minute later, van Veenendaal once again denied the USA. Once more, a cross from Rapinoe this time found Alex Morgan in the penalty area. However, Morgan’s shot was well saved by the Dutch keeper who tipped the ball onto the post.

Despite the pressure from the USA, they were unable to find the opening goal before half time.

On 58 minutes, USA were awarded a penalty. A cross into the box from Tobin Health deflected off Sherida Spitse.

From the guidance of VAR, the French referee had a look and awarded the penalty.

Up stepped Megan Rapinoe who calmly stroked the ball past the wrong footed Sori van Veenendaal to give the USA the lead.

The goal saw Rapinoe go level with teammate Alex Morgan in the race for the golden boot and took her tally to six goals.

Nine minutes later, the USA doubled their lead. Rose Lavelle who has been one of the breakout stars of the World Cup, picked up the ball and drove at the Netherlands defense. She then superbly curled the ball into the net from just outside the penalty box.

The Netherlands were throwing players forward, as they tried to get back into the game and were starting to leave gaps at the back.

On 75 minutes, USA defender Crystal Dunn was denied from close range by the brilliant van Veenendaal.

The Dutch keeper is currently without a club after leaving Arsenal in the summer. On this performance and the performances throughout the tournament, there are sure to be a number of offers for the talented keeper.

With three minutes to go, USA striker Carli Lloyd came on for the USA in what might be her 281st and last appearance for the USA.