Double or Nothing Graded 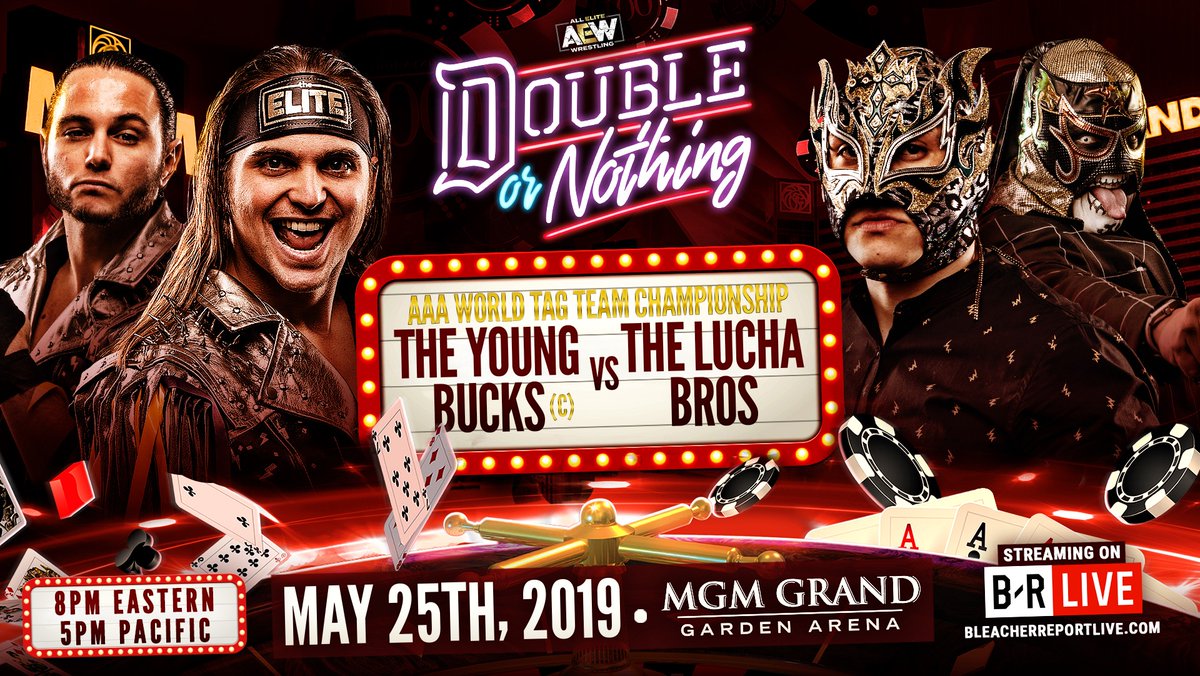 AEW Double or Nothing Final Results and Grades

Usually I sleep off the night of an event so I can really think back on the show to make sure I made the right call and wasn’t going off pure adrenaline. Well, it’s nearly twelve hours later and AEW’s Double or Nothing is still fantastic.

There are high spots, big moments, shock debuts and one surprise win I didn’t see coming that I will touch up on in a moment.

Without further delay, here is All Elite Wrestling Double or Nothing Graded.

I’ve said in the past that Battle Royals automatically get an “A” because of how awesome they are. This time though, I thought there could’ve been room for improvement.

Shawn Spears arrives at the number ten spot, which was more than alright. Tommy Dreamer, Billy Gunn and Glacier all take part in this match. MJF’s ability to get 20,000 people to hate him is further proof that he’ll be a great main heel in AEW in the near future.

The end came when Adam “Hangman” Page arrives at the twenty-first spot and last eliminates MJF.

Joey Janela’s near death and Orange Cassidy bump this grade up a few pegs.

Lots and lots and lots of flippy things go on in this one. There’s a few botches, but the two competitors make up for it with more flips, no fists.

Sabian wins, but I wouldn’t have minded it either way. Great showing by both men. Hopefully they are in AEW on a regular basis.

Not a bad first match for AEW. Daniels hits the “Best Meltzer Ever” for the win at the end. The pace stays high and fast throughout the entire match.

Chief Brand Officer, Brandi Rhodes added Awesome Kong to this match to give it an extra push. After that, it was alright.

Kylie can fly, which bumps this up to a “C+”. Except for a few spots, most of the action was Kylie vs Britt. I don’t know why that was the case, but it was good nevertheless.

“C” mostly because my feed cut out and I didn’t see 90% of this match. From the highlights I’ve seen on social media, it looks like a decent match.

I thought this match was underwhelming. Since I only knew who Aja was, I gave this match the benefit of the doubt, but I was disappointed in the end.

Referee either missed a count or the time keeper pulled a SummerSlam ’15. Aja and one of the other women hit each other with foreign objects. There are a couple of top rope moves in this one. Unfortunately average for the most part, however.

Match of the Night

Sometimes a wrestling match succeeds because of its great storytelling. I thought that was going to be the case with this one, but then Dustin hit a Cannonball Senton and it became a classic.

Cody destroys a Triple H-esque throne during his entrance with “Attitude Killer” on his weight belt. Dustin arrives wearing Goldust like attire. Cody and Dustin both mock the Stardust character. Dustin pants Cody and whips him with his own weight belt. Brandi spears Dustin, but then gets ejected and abducted by DDP. Cody bloodies his brother to the point where it looks like Dustin is wearing full red face paint, instead of the half-and-half he enters with.

Best Move of the Night: The Meltzer Driver

A leprechaun once told me to never bury my opponent’s offense or finishers, because we would both look like idiots and I would never be booked again. I can’t imagine how he must feel after this one.

The Bucks and Luchas clean house and try to physically exhaust each other with flips, kicks and finishers everywhere. The Bucks of Youth win with the Davey Dave Boy Meltzer Driver and retain their belts.

Luckily this was the main event and no one would have the burden of trying to go on after this great match.

Scratch that. Kenny and Jericho managed to put on a really great match, even after The Young Bucks and Lucha Brothers killed one another.

This match was the surprise victory I didn’t expect. I surely thought Omega was going to go on to face Hangman Page for the title in the future. After he lost, I wasn’t sure who he would have a match with now. Then the post match arrival of someone happened and I settled down*.

Jericho and Omega go to war for what felt like almost an hour. Jericho’s entrance showcases the evolution of Jericho throughout the years. I guess it was No DQ, because Omega goes through a table and uses the same one as a weapon a few times. Omega hits a ton of V-Triggers. Jericho goes for the Lionsault a couple times in a row.

The end comes with Jericho hitting his new move, The Judas Effect and pinning Omega for the win.

After the match, Jericho takes to the mic and demands respect for the match he just put out.

WTF Moment of the Night: Jon Moxley arrives through the crowd and beats up Jericho, the ref and Kenny Omega

And just when things couldn’t get any better…

Moxley arrives after leaving WWE to lay waste to everything in sight. He drops Jericho and the referee with a Double Arm DDT. He tries to hit it on Omega, but Kenny fights back. They brawl to the entrance way, eventually making it on top of a giant stack of poker chips. Moxley drops Omega with a Double Arm DDT, then AA’s him from the top of the poker chips to the stage below.

Overall AEW Double or Nothing Final Grade: B

Double or Nothing is a great show. There’s a little bit for every kind of wrestling fan throughout its entirety. I personally cannot wait for AEW’s weekly television show and more pay-per-view events in the future.

Wrestling is an art…