Why Both Sides Won The Joe Flacco Trade 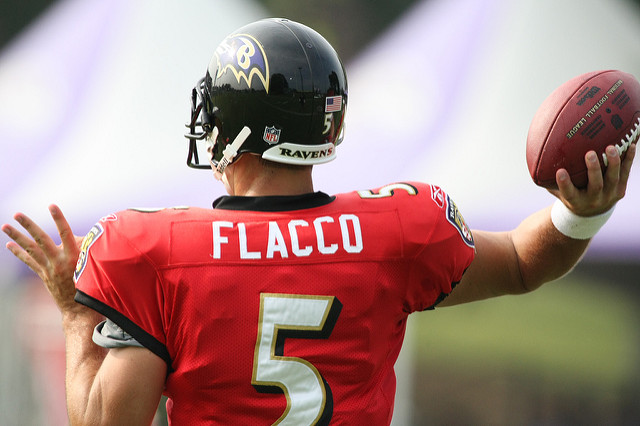 It was April 26th, 2008. The Baltimore Ravens were on the clock. As owner Steve Biscotti picked up the phone so did a 6’6″ kid with blue eyes and a stoic gaze. Biscotti opted to pick the best available quarterback, sending him on his way to Baltimore and changing the face of a city’s franchise for the next decade. That player was Joe Flacco from the University of Delaware.

Wednesday marked a bittersweet day for the Baltimore Ravens. The team parted ways with a Super Bowl MVP, and undoubtedly the greatest quarterback in the history of the franchise. The dawn has set one era as another one is set to begin. Emotions aside here’s why the Flacco trade was a win for both the Baltimore Ravens and the Denver Broncos.

Why The Ravens Won The Trade

The Super Bowl XLVII victory over the San Francisco 49ers was a huge moment for the Ravens’ franchise. However, what followed was a critical mistake from the organization. Following the Super Bowl win, the Baltimore Ravens agreed on a six-year contract with Flacco worth over $120 million. The contract included $52 million in guaranteed money. The result was at the time a team that lost a record number of starters to the offseason.

A bulk of Flacco’s current cap hit actually comes from a recent three-year extension that the Ravens doled out in 2016. Flacco is set to make $18.5 million in 2019 under the contract. With the trade, Denver will now take the cap hit, giving the Ravens some breathing room in cap space.

Baltimore Can Move Toward The Future

The impact that Joe Flacco had on the direction of this franchise is undeniable. However, another signal caller provided a huge spark for the team throughout the season. His name is Lamar Jackson. An unfortunate injury for Flacco upgraded rookie quarterback Lamar Jackson from team decoy to team leader, and ultimately ended the Flacco era in Baltimore.

Lamar Jackson started eight games in 2018, including a playoff matchup against the Los Angeles Chargers. Jackson posted a 6-2 record, with the two losses coming against the winningest regular season teams in the AFC. While the season ended on a sour note, the Ravens’ transformation into an elite rushing offense is something that the team will build upon in the offseason.

Why The Broncos Won The Trade

No Need To Draft A Quarterback

Not sure if anyone’s been keeping track of the Denver Broncos’ recent history of drafting quarterbacks, but it hasn’t been pretty. In fact, here’s a summary: Brock Osweiler has been tossed from team to team like a hot potato, Zac Dysert is the definition of non-factor in the dictionary, quarterback Trevor Siemian showcased nothing but mediocrity for the team, Chad Kelly loves being arrested and Paxton Lynch may very well be on a milk carton at a grocer’s shop near you. The Broncos opted to use free agency during the offseason to pick up the team’s signal caller for the 2018 season. Enter Case Keenum.

After a solid 2017 season, Denver acquired Keenum to fill a huge void and to lead the team to the playoffs. Instead, the Broncos missed the playoffs entirely, netting a mere six wins. It’s apparent that the Broncos need a change at the quarterback position—quarterback Joe Flacco can actually bring that change.

In addition, the Broncos now have a tenth overall pick that can be used elsewhere. With running back Phillip Lindsay coming off of an impressive rookie season, Denver can add pass catchers and sure up the offensive line this offseason. Look for Denver to use the draft and free agency to surround the newly acquired Joe Flacco with a bevy of pass catchers.

The Broncos Have A Playoff Caliber Defense

While the Broncos had a tough 2018 season, the defense showcased potential. Pass rushers Bradley Chubb and Von Miller combined for 26.5 sacks on the season. Cornerback Chris Harris was voted to his fourth career Pro Bowl after his 2018 campaign.

Additionally, other young players such as safety Justin Simmons and linebacker Todd Davis also had impressive 2018 showings. However, the hugest thing going for the defense may not be on the field. The Denver Broncos named Vic Fangio as their head coach for the 2019 season.

Fangio was the defensive coordinator for the Chicago Bears in 2018, who were statistically the NFL’s best defense. The acquisition of Fangio and Flacco makes this Broncos’ team a playoff dark horse for the upcoming 2019 season.