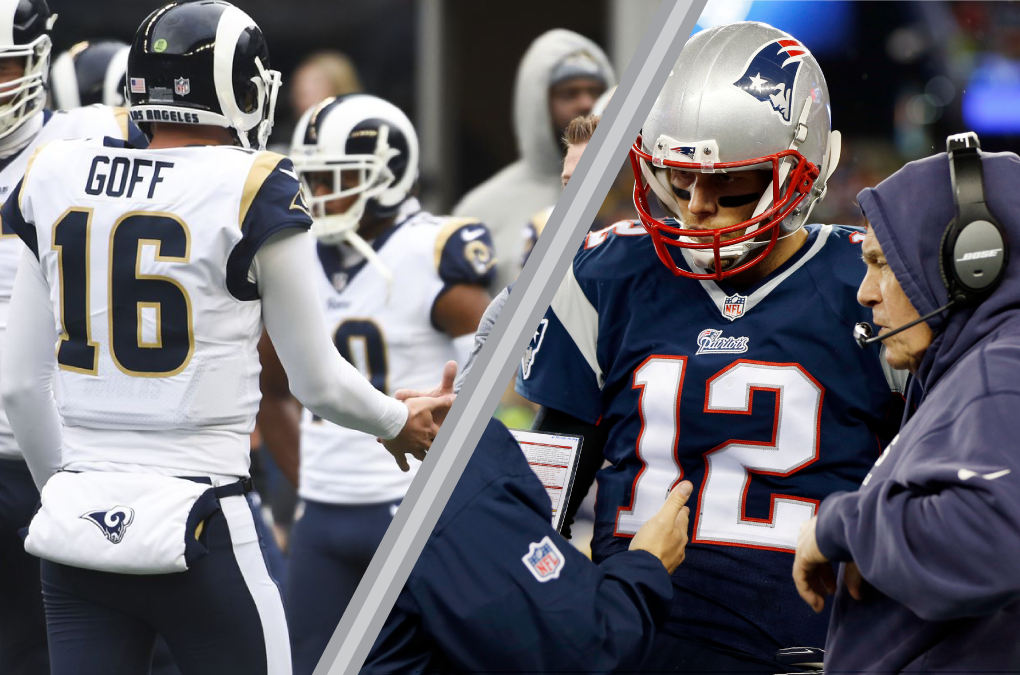 It’s been 17 years since the Los Angeles Rams last reached the Super Bowl. The New England Patriots, meanwhile, are gearing up for their fourth Super Bowl in five years. There are endless ways to tout the matchup: The Generation Battle, The Super Bowl XXXVI Rematch, or even the classic David vs. Goliath story.

Instead, however, the buildup to this game has been surrounded by “dirty laundry” from Conference Championship Week.

The AFC Championship and NFC championship were both affected by controversial, game-defining calls. As a result, the two teams with the highest probabilities of reaching the Super Bowl were knocked out of contention. Unsurprisingly, ethical concerns over the NFL’s officiating have since gained considerable traction and attention.

With 54 seconds remaining in the game, Patriots’ quarterback Tom Brady dropped back and tossed a pass towards star tight end Rob Gronkowski. The pass went right through Gronkowski’s hands and landed in the arms of Chiefs’ defensive back Charvarius Ward. Interception.

The crowd roared as the Chiefs booked their first ticket to the Super Bowl since 1969. Then, suddenly, the deafening roar was silenced. Breakout linebacker Dee Ford had lined up in the neutral zone and was called for offsides.

A single play essentially decided the game — a feeling the New Orleans Saints know all too well. A controversial roughing the passer call also made headlines.

The New Orleans Saints faced a 3rd and 13 at the Rams 13-yard line with 1:48 remaining in the game. Saints’ quarterback Drew Brees dropped back and flung a ball down the sidelines to wide receiver Tommylee Lewis.

However, Lewis was corralled by Rams’ defensive back Nickell Robey-Coleman before the ball could reach him. The result was an easy pass interference call for the officials. Right?

Instead, a blatant no-call shifted the momentum of the game, as the Saints were forced to kick a field goal, giving the Rams 1:41 to score. The Rams went on to win the matchup, while the league received considerable backlash.

17 years ago, two franchises in search of their identities squared off in the Louisiana Superdome for a chance at immortality. Both franchises had zero Super Bowl victories prior to the matchup. The result was the birth of a dynasty and heartbreak for a team 21 years removed from the big game.

After a slow first quarter, the Rams held a 3-0 lead going into the second. However, a pick-six from cornerback Ty Law – as well as a Brady passing touchdown – gave the Patriots a 14-3 halftime lead.

Down 14 points going into the fourth, the Rams were on the ropes. Luckily, the Rams scored 14 consecutive points in the quarter, giving New England the ball with 1:30 to go.

The Patriots then added two more Super Bowl wins in the next three years. Unfortunately, the Rams wouldn’t have the same luck. The Rams went 7-9 the very next season, missing the playoffs entirely. In fact, the Rams only managed to reach the playoffs twice from 2003-2017.

During the lead up to Super Bowl LIII, the injury report has remained rather stagnant. The Patriots have no injuries to report, as defensive lineman Deatrich Wise, who missed the AFC Championship game, was removed from the injury report. Consequently, New England will be at full strength in their chase for a sixth Super Bowl ring.

The concern in the Rams camp, meanwhile, has centered around kicker Greg Zuerlein. Zuerlein hit two clutch field goals – a 48-yarder, and a 57-yarder – to send the Rams to the Super Bowl. Courageously, Zuerlein made these kicks after suffering a left foot sprain at halftime.

The injury was a concerning one, as Zuerlein is vital to the Rams’ success. Luckily, Zuerlein is expected to play on Sunday with no setbacks.

Against all odds, the New England Patriots have beaten the two juggernauts of the AFC to meet the Los Angeles Rams in Super Bowl LIII. Tom Brady will be making his ninth career Super Bowl appearance, maintaining his unparalleled legacy of postseason success. So, how do the Patriots ensure that they’ll finish the job against the Rams?

The Patriots must also run the ball effectively to keep pace with the Rams on offense. Running the ball well does multiple things for the Patriots’ offense. Primarily, it will slow down the pass rush of the Rams’ defensive lineman — neutralizing defensive tackles Aaron Donald and Ndamukong Suh, as well as edge rusher Dante Fowler.

An efficient running game also makes the passing game that much more effective. As the Rams stuff more defenders in the box to stop running backs Sony Michel and Rex Burkhead, the Patriots’ pass catchers can flourish. The result? A potential nightmare for the Rams’ defense.

The Rams have been dominant all season, facing steep competition throughout the year. They are, however, an inexperienced team when it comes to competing on football’s biggest stage. Only four Rams players have a career Super Bowl appearance. So, how can the Rams knock off such an experienced Patriots team?

If the Rams want to win their first Super Bowl in 19 years, they must make Tom Brady uncomfortable in the pocket. The Kansas City Chiefs recorded a grand total of zero sacks against the Patriots in the AFC Championship. Giving Tom Brady time to scan the field is a recipe for disaster. The Rams, then, will not only have to disguise their blitzes well, but will also have to bring pressure when only sending four.

On offense, the Rams will also need receivers like Josh Reynolds to create separation on routes. Reynolds tallied 90 yards from scrimmage on five touches in the Rams’ NFC Championship victory. The young receiver replaced wide receiver Cooper Kupp after a season-ending injury, leaving a chink in the armor of a presumptively invincible Rams team. While Reynolds hasn’t exactly been consistent, the young receiver is talented and he will play a vital role in what could be a huge victory for the Rams.

Featured image courtesy of Edith Mellinger & Melvin A via Flickr

How the Patriots’ Offense Stacks Up Against the Rams
Four Key Players for Super Bowl LIII
%d bloggers like this: