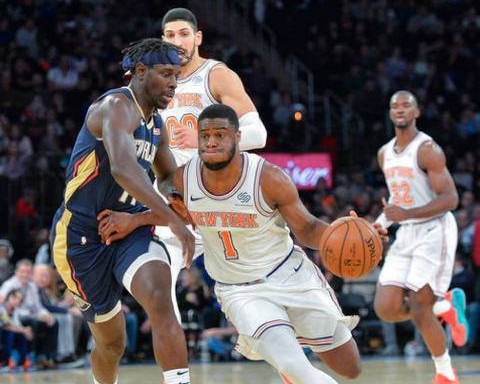 Emmanuel Mudiay took the unlikely path to the NBA

In today’s NBA, front offices mainly draft players based on their future potential. While some young players have the talent to make an immediate impact in the NBA, for others it may take a while for their game to blossom. In 2015, the 19-year old Emmanuel Mudiay was seen as a project by many NBA scouts. Unlike most high school players, Mudiay decided to play ball overseas rather than play in college.

Mudiay’s professional basketball career started as an 18-year old playing in China for the Guangdong Dongguan Tigers. While in China, Mudiay put up some impressive numbers. He averaged 18.0 points per game while shooting 47.8% from the field, which is impressive for any young player. Many NBA scouts marveled at his explosiveness and his measurables for a point guard. It’s not every day scouts find a point guard who’s 6’5″ with a 6’9″ wingspan.

Going into the 2015 NBA Draft, fans of many teams were salivating at the prospect of their team picking Mudiay. As a matter of fact, a lot of Knicks fans would confess they were hoping Phil Jackson would select Mudiay with the fourth pick. Instead, Jackson opted to draft Kristaps Porzingis, which was an unpopular selection amongst the Knicks faithful at the time. Nowadays, Knicks fans are kneeling at the altar of the “Porzingod,” a nickname eloquently given to Porzingis to magnify his greatness. Ultimately, Mudiay fell to the Denver Nuggets with the seventh pick.

In his first season with the Nuggets, Mudiay showed glimpses of his potential. He started 66 of 68 games played, and he averaged 12.8 points and 5.5 assists per game. At first, the future looked bright for Mudiay — he was easily one of the standouts from the 2015 draft class.

Unfortunately, the injury bug struck Mudiay in the following two seasons, which delayed his progress. Between 2016-18 with the Nuggets, Mudiay only had 41 starts in 97 games played. All of those starts came in the 2016-17 season, and with the emergence of Jamal Murray and Gary Harris, Mudiay lost his starting spot for good.

At that point, Mudiay’s confidence was low, and to regain his form, a change was necessary. Denver viewed Mudiay as a surplus to requirements and decided to deal him to the New York Knicks. He went to the Knicks in a 3-team deal that also sent Doug McDermott to the Dallas Mavericks and Devin Harris to the Nuggets. At the time, Scott Perry and Steve Mills knew they were acquiring a player who has potential but is sorely lacking in confidence, and it showed.

In the latter part of the 2017-18 season, Mudiay seemed like he had the balance of a toddler learning how to walk. His lack of balance led to missed shots and falling whenever he attacked the rim. Mudiay always shied away from contact, which contributed to his inability to finish at the rim. Eventually, Knicks fans grew tired of Mudiay’s performances, and many wouldn’t have batted an eye if the front office were to release him. Despite Mudiay’s poor play, Perry and Mills pulled a masterclass move behind the scenes to help improve Mudiay’s confidence.

When Mudiay arrived in New York, Perry and Mills made sure to let him know they weren’t concerned with his performances for the remainder of the season. Instead, they encouraged Mudiay to come into next season’s training camp in the best shape of his life. Mudiay heeded their words and came into training camp 10-15 pounds lighter. It also helped that the Knicks hired David Fizdale as coach.

During Fizdale’s introductory press conference, he pointed out Mudiay and said: “we’re gonna get you right.” From the get-go, Fizdale believed in Mudiay and he showed his belief by playing Mudiay as soon as he recovered from an ankle injury suffered in preseason play. Mudiay logged his first significant minutes, against the Dallas Mavericks, on November 2nd. He finished with 6 points in 16 minutes. From that point on, Mudiay began to gain his confidence back slowly.

The month of December has been kind to Mudiay

Mudiay struggled to maintain consistency in his play in November. Once December rolled around, he began to show the potential scouts saw in him back in 2015. Currently, Mudiay is averaging 20.0 points per game on 47.8% shooting and 5.8 assists per game in December — easily the best stats Mudiay has put up in any 10-game span in his career. Overnight, Mudiay has become the Knicks best player.

In addition to his spectacular numbers, Mudiay also scored a career-high 34 points in a thrilling win against the Charlotte Hornets. He also dropped 32 points in a blowout loss to the Phoenix Suns in December. In one month, Mudiay has as many 30+ point performances as he has for his whole career.

Overall, the improvement in Mudiay’s game is evident. He improved his balance on his jump-shot, and instead of shying away from contact, he uses his body to absorb contact and finish at the rim. Also, he pushes the pace and creates easy scoring opportunities for others.

The emergence of Mudiay might be the best story in the NBA untold, until now.

Curry, Durant Reach Milestones In Warriors 110-93 Win Over The Grizzlies
Celtics Succumb to Injury, Suns Win in Boston 111-103
%d bloggers like this: