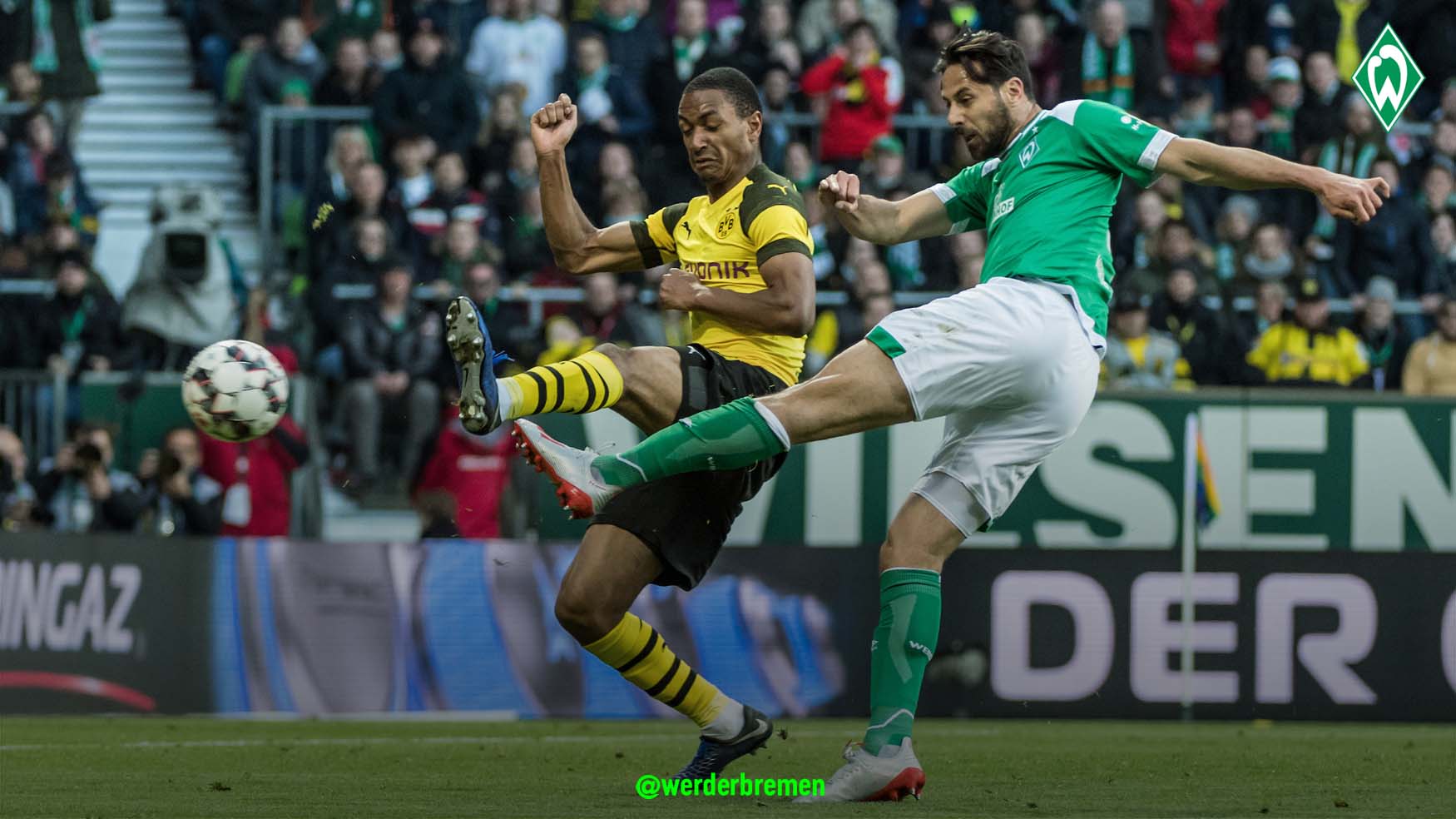 Borussia Dortmund threw away a two goal lead as they were held to a draw against Werder Bremen.

Dortmund looked to be cruising to all three points after goals from Christian Pulisic and a brilliant free kick from Paco Alcacer put them two up at half time.

However, an awful error by goalkeeper Roman Burki allowed Werder to get back into the game. A shot from Kevin Mohwald went through the legs of Burki who really should have saved it.

The result means Dortmund are now four points behind Bayern with just two games remaining and their title hopes look to be over.

For Bremen, their hopes of earning an Europa League place also look to be over and are also four points off a European place.

Borussia Dortmund got off to a bright start and appeared fired up after their derby defeat to Schalke last weekend.

He skipped past Milos Veljkovic and then coolly slotted the ball past Jiri Pavlenka in the Werder goal.

Eight minutes later, Borussia Dortmund almost doubled their lead. Mario Gotze picked the ball up inside Werder Bremen’s penalty box. He turned and hit a first time shot, which was parried away by Pavlenka.

On the half an hour, Dortmund had another good chance to extend their advantage. Jadon Sancho picked up the ball inside Bremen’s penalty area but curled his shot way wide when he should have hit the target.

Werder Bremen were struggling to create any clear cut chances and were unable to get their star player Max Kruse into the game.

The closest they came in the first half was a shot from 25-yards-out from Milos Rashica, which dipped just over the crossbar.

Dortmund striker Paco Alcacer had been fairly quiet throughout the first half until the 41st minute.

Die Schwarzgelben had a free kick 20 yards from goal. Up stepped Alcacer who brilliantly curled the ball past Pavlenka to double Dortmund’s lead.

Just before half time, Dortmund should have added a third. A cross into the box by Mario Gotze looked like it was going to be tapped into the net by Abdou Diallo. But somehow the French defender couldn’t get a clean contact on the ball from two yards out and scuffed his shot wide.

Dortmund picked up where they left off at the start of the second half.

A first time cross from Mario Gotze picked out Christian Pulisic inside the penalty box but the American couldn’t divert his header on target.

Minutes later, Dortmund midfielder Thomas Delaney unleashed a thunderous shot from 30-yards-out, which was tipped over the crossbar by Pavlenka in the Werder goal.

On 65 minutes, Lucien Favre’s side almost made it three. A superb curling cross into the box by Jadon Sancho found Paco Alcacer who headed the ball towards goal. It looked destined to go into the net but the Spaniard was denied by a fantastic save by Pavlenka.

Kevin Mohwald hit a shot from just outside the box, which went right through the legs of Burki when he really should have saved it comfortably.

Incredibly, four minutes later, Werder Bremen were level. Ludwig Augustinsson did brilliantly to keep the ball in play and get a cross into the box. He picked out substitute Claudio Pizarro who fired the ball past Burki to haul Bremen level.

Florian Kohfeldt’s side now had the momentum and looked the more threatening going forward.

With three minutes to go Dortmund almost won it. Christian Pulisic picked up the ball and drove inside the penalty area but he dragged his shot wide when he should have hit the target.

Werder Bremen almost won it themselves in injury time. A cross into the box by Max Kruse found Claudio Pizarro but he fired his shot wide of goal.

Both sides had to settle for a point, which neither were looking for.

Borussia Dortmund’s title hopes look to be over after throwing away a two goal against Werder Bremen.

Dortmund manager Lucien Favre will be incredibly frustrated at how his side fell apart in the second half. Not for the first time this season Dortmund threw away a lead.

If Dortmund don’t win the Bundesliga title this season, they will be left ruining and wondering what might have been.

This season was a big opportunity for them to become champions of Germany once more, especially given how ordinary Bayern Munich have been at times this season.

The pivotal moment of the season was back in February where Borussia Dortmund somehow let a three goal lead slip against Hoffenheim, conceding three goals in the last 15 minutes.

That draw was the first of three games without a win, where they drew to lonely Nurnberg and lost away to Augsburg.

It was period in the season where Borussia Dortmund could have stamped their authority on the title race. Instead they allowed Bayern back into it and haven’t been the same side since.

Mathematically, they are still in with a shout but despite Bayern facing two tough games against Leipzig and Eintracht Frankfurt, you wouldn’t expect them to lose both games.

Overall, Lucien Favre will know this was a chance missed and with Bayern expected to be stronger next season, it may be a chance that won’t come around anytime soon.

Werder Bremen showed great fighting spirit to salvage a point. They barely created any chances in the first half but Roman Burki’s error allowed them to get back into the game.

They looked the better side thereafter and probably deserved a share of the spoils.

Werder has shown they can mix it with the best in Germany but at times this season have been too inconsistent.

That inconsistency looks set to cost them a place in next season’s Europa League. However, if Florian Kohfeldt can add to his squad, they should challenge for the European positions next season.

Next up for Werder they face are away to Hoffenheim. Meanwhile, Dortmund are at home to Fortuna Dusseldorf.