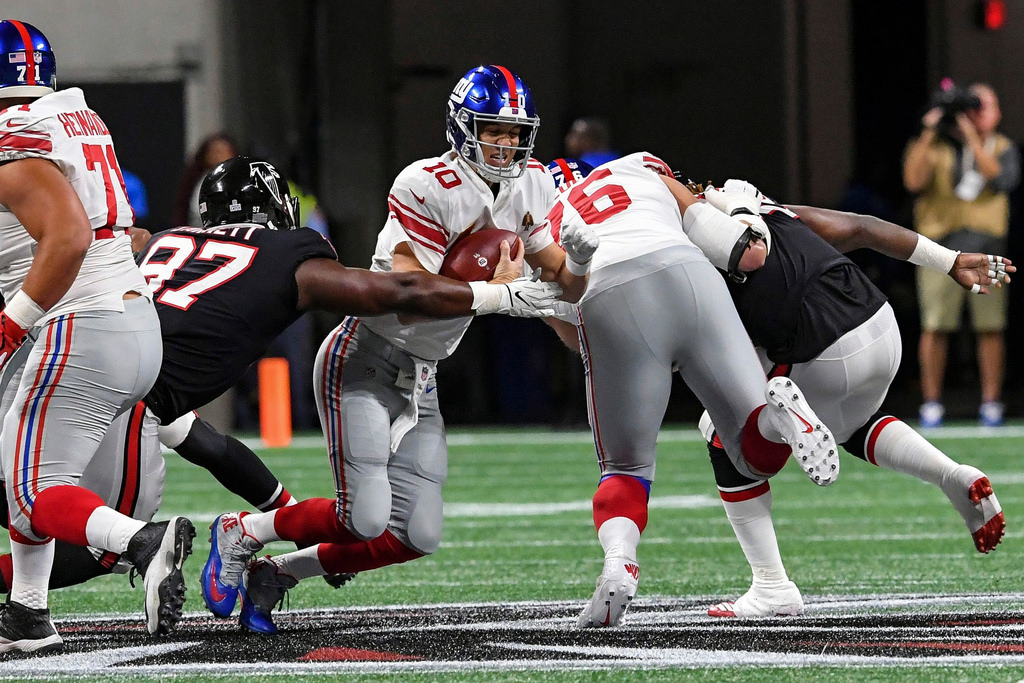 Week 7 of the NFL season brought a Monday Night Football matchup between the New York Giants and the Atlanta Falcons. With both teams at the bottom of their division, a win for the Atlanta Falcons kept them in the divisional race.

New York took a tough loss filled with questionable coaching, keeping them in last place and putting any hopes at the playoffs in doubt.

Atlanta started the game gaining two first downs before New York’s defense would step up. The opening drive stalled after Olivier Vernon sacked Matt Ryan, forcing a punt. The Giants’ first drive was filled with Barkley and Beckham Jr., as the two touched the ball on every play besides a sack by Grady Jarrett. After the sack the Giants could not convert, punting the ball back to Atlanta, pinning them at their one-yard line.

The Atlanta Falcons reached the 50-yard line before rookie outside linebacker Lorenzo Carter sacked Matt Ryan halting their offense. After another punt, the New York Giants took over at their 11-yard line. The Giants ended the quarter on an 11-yard pass to Saquon Barkley, driving at their 35-yard line.

The slug-fest continued, as the Giants would have to punt following a Jack Crawford eight-yard sack, stalling their drive. The surprisingly slow start for the Falcons’ offense continued after the Giants’ defense would force another punt. Newly activated return man Quadree Henderson would set the Giants up nicely returning the punt 21 yards to the Giants 42-yard line.

The Falcons’ newly signed kicker Giorgio Tavecchio hit the extra point making it 7-0 Falcons. The New York Giants answered back quickly, driving 81 yards down the field before the Falcons got another sack. The Giants settled for a short field goal attempt that kicker Aldrick Rosas nailed making the score 7-3.

On the ensuing drive, Atlanta’s starting right guard Brandon Fusco would be helped off the field with a leg injury. The next play Matt Ryan heaved a throw deep to Julio Jones drawing a 38-yard pass interference call.

The Giants opened the half on offense driving all the way downfield to the Falcons one-yard line. New York failed to convert on a 4th and 1 from the Falcon’s one-yard line, giving the ball back to Atlanta. The Falcons got out of their end zone and drove all the way to the Giants’ 32-yard line before Julio Jones fumbled, giving the ball back to New York.
The Giants gained 62 yards on their next drive, with 58 yards coming from wide receiver Odell Beckham Jr. before settling for another field goal. On this drive, Odell Beckham Jr. became the fastest wide receiver to gain 5,000 yards in his young career.

.@obj is officially the fastest WR to reach 5,000 yards in the Super Bowl era 🔥 pic.twitter.com/oFJVeVbOxJ

Aldrick Rosas nailed the 36-yard field making the score 10-6 late in the third quarter. The Falcons got the ball and drove all the way to the Giants’ 32-yard line to end the quarter.

After stalling, the Atlanta Falcons attempted a 50-yard field to start the fourth quarter. Giorgio Tavecchio nailed the attempt, giving Atlanta a 13-6 lead. The ensuing drive went nowhere for the Giants, resulting in another punt to the Falcons.

Atlanta capitalized on this drive going for 65 yards culminating in a 30-yard touchdown by running back Tevin Coleman.

The Giants scored back quickly, leaning heavily on Saquon Barkley and Odell Beckham Jr. once again. The two combined for 67 of the team’s 78 yards on this drive ending with a two-yard touchdown run by Saquon Barkley. The Giants questionably went for two instead of taking the extra point to make it a six-point game and failed to convert leaving the score 20-12.

After taking nearly three minutes off of the clock, the Falcons stalled and attempted a 56-yard field goal. Tavecchio came up clutch and hit his second 50+ yard field goal of the night making it 23-12 Atlanta.

The Giants failed to recover the onside kick, allowing Atlanta to run out the clock winning this one 23-20.

Eli Manning ended the night with his best fantasy performance of the season throwing for 399 yards and a touchdown-scoring 20.7 fantasy points. Wide Receiver Sterling Shepard also balled out going for five receptions and 167 yards giving him 16.7 fantasy points on the night.

Running back Tevin Coleman finished with 82 yards and a touchdown giving him 14.2 fantasy points on the night. Although Julio Jones failed to score once again and fumbled, his 104 receiving yards led the team and was good enough to earn him 8.4 fantasy points.

Although the Giants showed some fight and offensive success late, their poor start and coaching doomed them. Between going for two when an extra point makes it a one-score game, and back to back failed quarterback sneaks that wastes a minute off the clock, New York blew any chance they had of a comeback victory.

New York had their highest yardage total this season gaining 433 total yards of offense which is quite the silver lining. The Giants will head back home with a 1-6 record to take on divisional rival the Washington Redskins next Sunday at 1pm.

With every team in their division winning this week, Atlanta desperately needed this win to stay in the divisional race. Although they are still last, a big win here keeps them within striking distance of first place.

The Falcons offense once again showed up gaining 423 total yards of offense. Although The Falcons would score two touchdowns, they would never make it to the Giants’ red zone. Atlanta’s defense had some big moments as well, recording four sacks on the night which is nearly half of their total coming into this game.

Atlanta will enter their bye week with a 3-4 record before traveling to play the Washington Redskins for a Week 9 matchup.