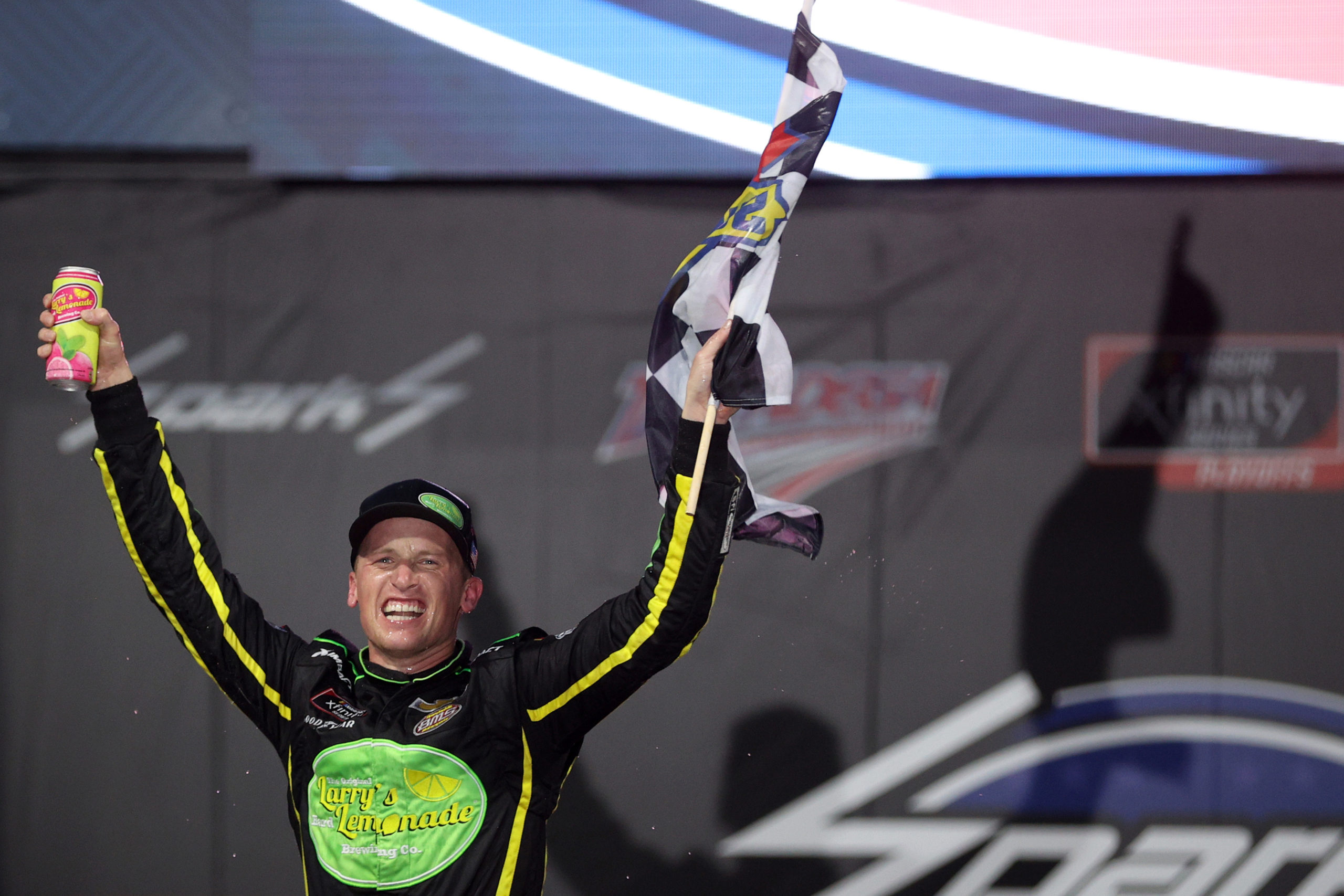 TALLADEGA, Ala. – Much like the Truck race only hours earlier, Talladega proved to be the ultimate unknown for the Xfinity Series. After the race was called just shy of completion due to darkness, Brandon Brown was the lucky driver out front. This marks the first career victory for the Virginia driver in his 114th start. The family-owned Brandonbilt Motorsports 68 team upset all Playoff drivers, stealing the victory from all 12 contenders.

Both Stages were largely clean and green, as drivers tried to position themselves for the finish. The Stage victories went to non-Playoff drivers John Hunter Nemechek and Blaine Perkins. The jostling amongst the pack though would eventually lead to carnage though, as the first big one of the day occurred at the head of the field.

Not One But Two Big Ones Thin the Herd

Noah Gragson and Myatt Snider were able to climb out of the car under their own power after this hard crash at @Talladega.

While leading the outside lane, Brett Moffitt would spin off the bumper of Jeb Burton. The 02 turned into the path of Noah Gragson, destroying the 9 and the 2 of Myatt Snider. Gragson’s shot at another superspeedway win and a third victory in five races came to a sudden end.

Once the race restarted, Brandon Jones found the lead after Burton did not get going. Facing a must-win scenario to advance onward in the Playoffs, the 19 was desperate. Another Brandon would quickly rise up to challenge for the lead however, as Brandon Brown’s 68 edged ahead on lap 100.

Just moments after Brown took command, another big one would ensue. Harrison Burton would get hooked by Brett Moffit in the middle of the pack, collecting many other cars.

Big crash takes out a ton of cars late at @Talladega. #NASCAR pic.twitter.com/lomqMsluqT

Due to impending darkness, NASCAR decided to not restart the race and would call it just six laps early. While the time of the caution saw both Brandons door-to-door, Brown was ahead by half a car-length. After leading only eight laps, the underdog team would go to Talladega victory lane.

“This is everything we hoped and dreamed for. Everything I’ve ever wanted to do is take the trophy home to Mom and Dad. Oh, my god. Thank you so much Larry’s Lemonade, all of our partners. It’s unbelievable.

“Everything shifted top to bottom so much, it was like, ‘OK, let’s just stay patient where we’re at and hope for the best.’ We saw our moment and we seized it. God, I’m just so proud of Brandonbilt Motorsports and so proud of our team, here and at home and everyone that worked on our team since the beginning. We did it, we did it, we did it.”

Even without a Playoff winner, one driver is locked into the Round of 8. On points, Austin Cindric is safely through to the next round of the Playoffs. Heading into the Round of 12 finale though, 11 more drivers are racing for seven spots. The cut line is both Burtons, Harrison and Jeb, separated by just eight points.

The Round of 12 finale will see the Xfinity Series take to the Charlotte Roval, for only the fourth time ever. Coverage of the Drive for the Cure 250 will be Saturday, October 9 at 3:00 p.m. ET on NBC, PRN, and SiriusXM NASCAR Radio Channel 90. AJ Allmendinger has won the last two Roval races, but Austin Cindric will surely be a favorite for the victory as well.