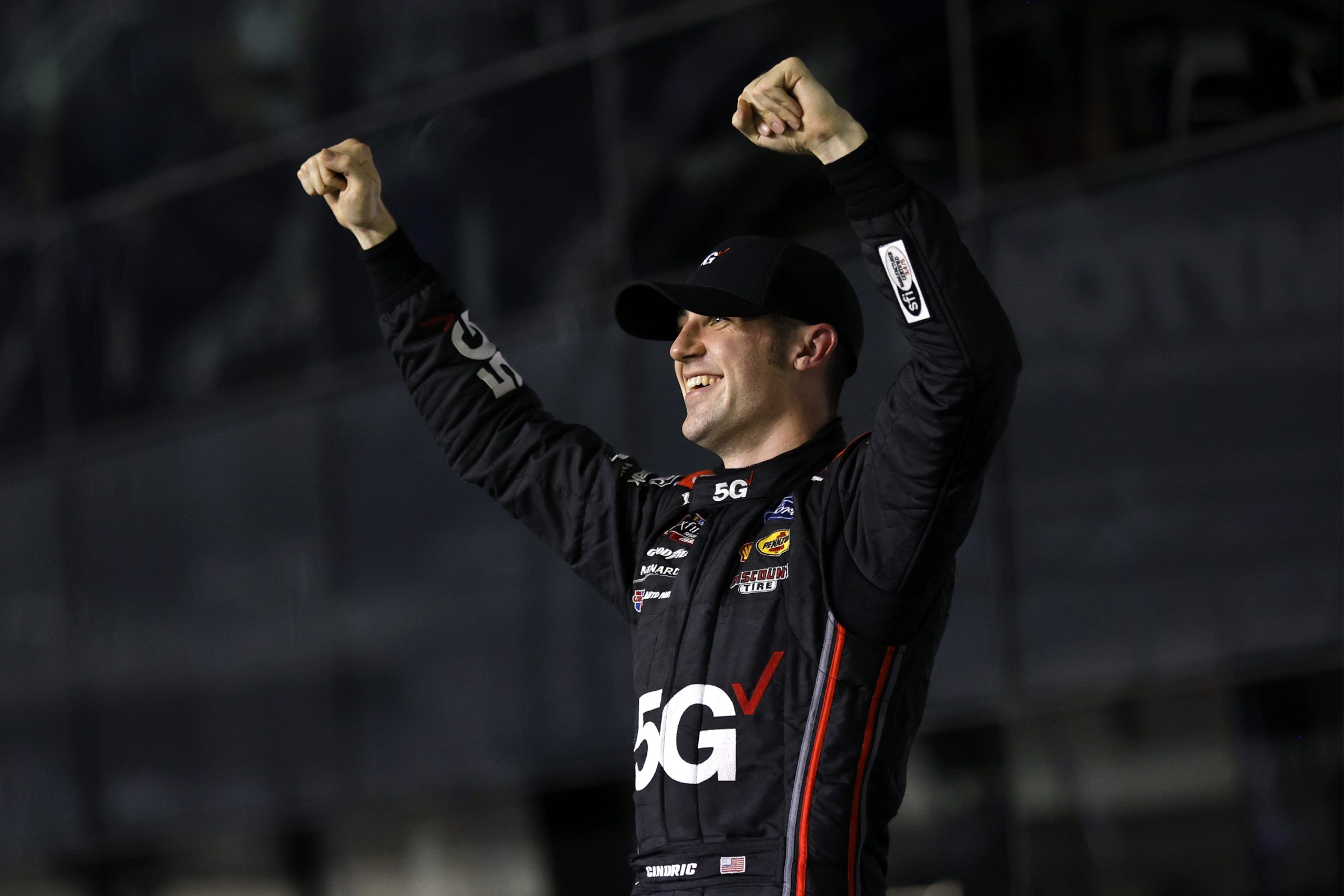 Defending Xfinity Series champion Austin Cindric held off multiple hard-charges from Harrison Burton and Brett Moffitt to win the Beef. It’s What’s For Dinner 300 at Daytona. The win is Cindric’s second-straight, dating back to last season when he won the 2020 season finale at Phoenix. This victory is also Team Penske’s first at the Daytona oval in the Xfinity Series.

Austin Cindric and Justin Allgaier started on the front row and stayed out front through the first 18 laps of the race. Riley Herbst then took command for nearly the remainder of the stage. The Joe Gibbs Racing drivers, led by Brandon Jones, charged on the inside of Herbst and the field. Jones barely edged Herbst at the line to win Stage 1.

Three cautions came out in Stage 1 for minor issues. Alex Labbe spun out on lap five but was able to continue. Josh Williams also had multiple tire issues that left him a number of laps down.

Most of the field came to pit road at the Stage 1 caution, but seven drivers stayed out after pitting late in the previous stage. Ryan Sieg and Brandon Brown led the field to green. After clearing out front, Sieg gathered the field on the outside lane as they ran single file for the majority of the stage.

With under five laps left in the stage, Brett Moffitt, Ty Dillon, and Austin Cindric led a charge on the inside lane to get side-by-side with the leader, Sieg. Moffitt made it to the lead and Sieg got caught in the middle as the outside lane made a run of their own. At the stage finish, Moffitt held off Dillon and Cindric to win Stage 2.

Coming to the green and white checkers to end the stage, Brandon Jones came down on Myatt Snider in the tri-oval and went sliding through the rain-soaked grass. His car came back up on the track and collected Cody Ware and Alex Labbe. The red flag was displayed for nearly 14 minutes to clean up the track.

A big NASCAR Xfinity crash at Daytona for Brandon Jones, Cody Ware and Alex Labbe as Stage 2 comes to an end. pic.twitter.com/DOaVxBHy1m

Green Flag Pit Stops Lead to the First Big One

Dillon and Cindric led the race to start Stage 3 and stayed out front for the first 10-15 laps. Cindric and a group of other drivers attempted to make a green-flag pit stop with 45 laps to go, but not everyone got the memo. Michael Annett, who was running mid-pack, got hit from behind as he slowed down to enter pit road. Annett slid back up into the outside wall, collecting Jeffrey Earnhardt and Gray Gaulding. Noah Gragson was up ahead of the crash when someone ran into the back of him as he slowed to enter pit road. This knocked multiple drivers out of the race, including the two JR Motorsports drivers involved.

Trying to pit under green is tough here … Another big @NASCAR_Xfinity crash at Daytona. pic.twitter.com/VvlbKmYhcD

Justin Haley and Harrison Burton inherited the lead after the field made pit stops. Burton was able to take the top spot from Haley with just 32 laps to go. The field ran single file around the outside with Burton leading over Hemric and Dillon. A spin by Caesar Bacarella bunched up the field with just 21 laps remaining.

Burton held the lead on the ensuing restart with 17 laps to go. Hemric and Dillon ran just behind Burton on the inside. Dillon got a run on Hemric and took it to the middle lane, making it three-wide. Thinking he was clear of Hemric, the 54 came down but was hooked by his Joe Gibbs Racing teammate, sending him around into the pack. In addition to Hemric and Dillon, Justin Allgaier, Jeb Burton, Justin Haley, and Riley Herbst were all involved in the 14-car crash. Allgaier, Haley, and Herbst were all eliminated from the race.

THE BIG ONE (again)!

Just one lap after the restart, Jeb Burton was trying to make up ground on the outside lane. As he jumped to the outside, contact with the 4 car sent Landon Cassill hard into the outside wall. The spin collected the 44 of Tommy Joe Martins as well. Both cars went sliding through the grass and had substantial damage. Neither Martins nor Cassill would be able to drive away.

During the final restart, Austin Cindric started on the inside row with Harrison Burton on the outside. The 22 cleared in front of Burton coming to the white flag. Harrison Burton had multiple runs at Cindric, but timed blocks stalled the 20’s momentum each time. Brett Moffitt made a move going into turn three, taking over the second spot, but wasn’t able to get back to Cindric. Austin Cindric led 28 laps en route to his ninth career Xfinity Series win, the 22-year old’s first at a superspeedway.

Take a look at the final lap that earned @AustinCindric the #Beef300 win at @DAYTONA! 🏁 pic.twitter.com/Fl4JatQJMH

Next Saturday, the NASCAR Xfinity Series drivers will take their talents to the Daytona Road Course in the Super Start Batteries 188. Race coverage will begin February 20th at 5:00 p.m. ET on FS1, MRN, and SiriusXM NASCAR Radio Channel 90. Defending champion Austin Cindric led 21 of 59 laps on this configuration last year in way to victory. The Team Penske driver will look to keep up his road course success while other contenders try and bounce back.