Late Pass Leads to Win for Briscoe at Bristol 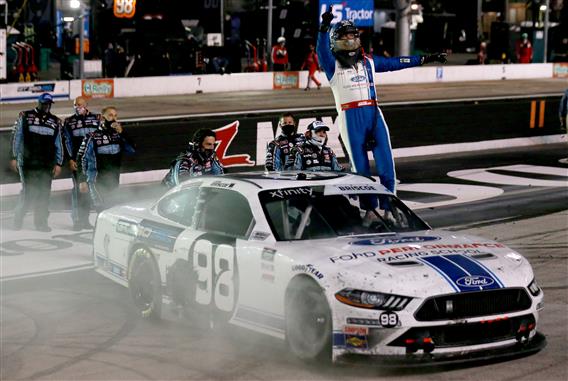 Chase Briscoe passed Ross Chastain with 11 to go, and also used a little bump and run to get around championship rival Austin Cindric with six to go to win the Food City 300 at Bristol Motor Speedway. It was Briscoe’s series-leading seventh win of the season. He will begin the Playoffs tied with Cindric with 50 playoff points, 17 more than third-place Justin Allgaier. Brandon Brown also clinched the final postseason spot with a 12th place finish.

Ross Chastain started alongside polesitter Justin Allgaier but it only took him three laps to take the lead. Chastain held that lead through the lap 40 competition caution. Allgaier then got a big jump on the outside to clear Chastain on the restart.

On lap 64, Jeffrey Earnhardt made contact with BJ McLeod, sending McLeod hard into the outside wall. His car would then slide down the racetrack, collecting Vinnie Miller. Tommy Joe Martins spun as others were trying to check up to avoid the wreck.

Allgaier kept the lead for the remainder of the Stage over Justin Haley and Chase Briscoe. What Allgaier lacks in regular season wins, he certainly makes up for in Stage wins.

Ryan Sieg stayed out after pitting during Stage 1, but he was easily overtaken by Justin Allgaier. Justin Haley soon had a right front flat while running inside the top 10, forcing him to make a green flag pitstop.

Playoff driver Michael Annett saw his race end early after Joe Graf, Jr. slid up the race track, forcing Annett into the wall. This incident resulted from Brandon Jones making contact with Graf, Jr. entering the corner. The race was subsequently red-flagged to clean up fluid.

Once the race resumed, Allgaier picked up right where he left off to cruise to another Stage win. The Stage win was a series-leading 12th of the season.

Justin Allgaier had a slow pit stop, allowing Chase Briscoe and Ross Chastain to take the lead to begin Stage 3. Chastain used the outside to power by Briscoe for the lead. Allgaier complained that his car was too tight as he fell from third to sixth.

Bayley Currey lost a shock with 97 to go, which brought out the caution. Chastain held the lead for the next 40 laps until Dexter Bean brought out another caution with 55 to go.

Chastain kept the lead off pit road but he got loose on the restart, allowing Austin Cindric to take his first lead of the night. As Cindric began to work lapped traffic, Chastain and Briscoe closed to within a half-second. With 15 to go, Cindric reported that he had lost power steering in the car. Briscoe’s car came to life at the same time as he powered by Chastain and Cindric in a span of five laps to take the win. Chastain had to settle for another second-place finish, despite leading 117 laps.

Who’s Hot, Who’s Not for Bristol Elimination Race?
Harvick Earns Ninth Win of 2020 at Bristol
%d bloggers like this: