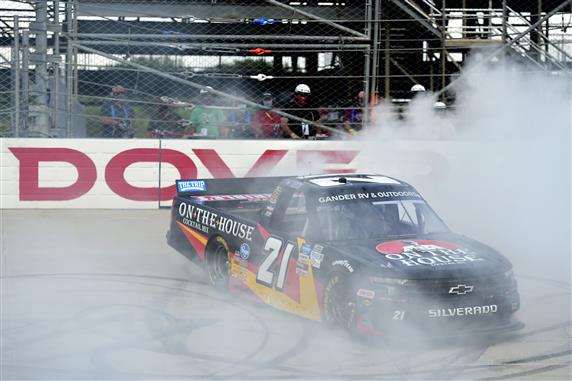 Zane Smith Wins an Intense Race at the Monster Mile

California native Zane Smith held off series veteran Matt Crafton and scored the victory in Friday’s Gander Outdoors Truck Series race at Dover International Speedway. The 21-year-old clinched the second win of his Truck Series career, as his first came at Michigan a few weeks ago. With four top-10’s in the last five races, the GMS Racing rookie driver is looking to be a real contender in the Playoffs.

“What an awesome truck,” Smith said following the race. “I think we all know that I suck at restarts, but I picked a good time to have a good one. Man, two wins. This is by far the most fun I’ve ever had racing in my career. I’m just so blessed to be here.”

Another benefit to Smith’s victory is winning the second race of the Triple Truck Challenge, earning the team an additional $50,000 bonus. When brought up, Smith had this to say: “Hopefully, I can pay off my Chevy Silverado.”

Stage one of the KDI Office Technology 200 stayed relatively clean. On lap eight, the 02 truck of Tate Fogleman went for a spin, bringing out the first yellow flag of the race. Soon after that, the competition caution flew on lap 22. The remainder of the Stage went green and Austin Hill was the first to cross the line at the Stage 1 finish.

Although Chandler Smith started with the lead for Stage 2, his alternate pit strategy cost him. Playoff bubble driver Derek Kraus would methodically work his way forward, as the 51’s older tires showed their age. The 19 would take the top spot on lap 79 in heavy lapped traffic. Kraus seemed to be on his way to an easy Stage 2 win. However, Zane Smith would show his strength here, as he also made steady gains on the lead. Just mere seconds before a Stage-ending caution, the 21 of Zane Smith would get by Kraus. Oddly enough, the caution was for Chandler Smith spinning after contact from teammate Christian Eckes. Sheldon Creed and Ben Rhodes would both also get damage from the spinning 51.

Chandler Smith goes around. Ben Rhodes and Sheldon Creed get a piece of it too. pic.twitter.com/78N0KVYCCh

Despite Christian Eckes restarting the final Stage as the leader, GMS Racing Trucks would flex their strength. With 75 laps to go, the race was a three-way battle between Eckes, Zane Smith, and Brett Moffitt. After making his final pit stop with 39 laps left, the 21 would cycle back to the lead. Even with one final restart, nobody had anything for Zane Smith, as he earned his second career win. The Huntington Beach, CA native has now won two of the last three races. Smith is now securely into the Playoffs with the two wins and four Stage wins. Smith is one of three drivers tied with four Stage wins, which is a series-best mark.

With three races remaining in the regular season, Zane Smith is one of five drivers locked into the postseason with a win. Smith joins Grant Enfinger, Austin Hill, Matt Crafton, and Sheldon Creed. Brett Moffitt is relatively safe at 94 points above the cut line in sixth. Ben Rhodes and Christian Eckes are both tied at +76. From there however, the bubble battle is as tight as ever.

Currently, Tyler Ankrum and Todd Gilliland are the last two in the 2020 Playoffs. Ankrum is just in by nine points, while Gilliland is +4. Derek Kraus is the next closest competition at 11th in points, just four markers behind Gilliland. The fight for the final two Playoff spots is likely to fluctuate among the next three races at Gateway, Darlington, and Richmond. Even further back, Johnny Sauter, Stewart Friesen, or someone else could win and upset the entire Playoff picture.

The next stop for the Truck Series is Friday, August 30 at World Wide Technology Raceway at Gateway. Coverage of the WWT Raceway 200 will be at 12 pm EST on FS1, MRN, and SiriusXM NASCAR Radio Channel 90. The St. Louis track is one of the most technical ovals on the circuit, and will certainly impact the Playoffs.