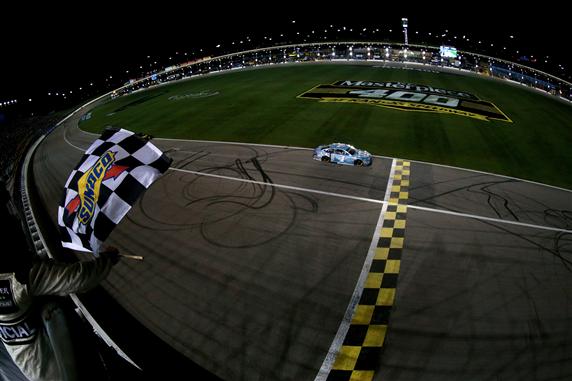 Expect Playoff Drivers to be Up Front at Kansas

This weekend the Monster Energy NASCAR Cup Series heads to Kansas Speedway for the final race of the Playoff’s 2nd round. Just as we are reminded every week of the Playoffs, the drivers competing for the championship must share the track with those who aren’t. This means there are countless things that can cause problems that can alter the race for Playoff drivers. It adds a whole new layer of strategy and things to worry about. There is truly nothing you can do if you’re involved in the problems of a non-playoff driver. It is just how racing goes.

However, this weekend at Kansas there may be one thing that the Playoff drivers don’t need to worry about. That would be the chance of a spoiler winning the race. Through the past 10 fall races at Kansas, not one driver outside the Playoffs has won. In fact in that time only 2 drivers not currently in the Playoffs have won a race at the track. Those drivers are Jeff Gordon in 2014 and Jimmie Johnson in 2015. Kansas for whatever reason is a track that is dominated by those contending for a championship. It is likely due to the fact that Playoff drivers elevate themselves during the biggest moments and a cutoff race is just that.

Playoff Drivers Dominant at Kansas in the Spring

Current Playoff drivers were strong contenders at Kansas in the spring race. This weekend there isn’t any reason to believe that it will be different. Kevin Harvick won the race, and has been one of the sport’s dominant drivers this year. Not just this, but he was one of 3 drivers who dominated that race in the Spring. The other two being Kyle Larson and Ryan Blaney, who are also in the Playoffs.

Not only are Larson and Blaney in the Playoffs, but they are below the cutoff line for the next round. With this being said, that means their backs are against the wall and they are in a must-win situation. With the speed that Blaney and Larson showed earlier this year, it is likely that you will see them battling for a win. It will be a harder task for Larson, as he is in a backup car, but it will make for an interesting cutoff race. So this weekend, don’t expect a non-playoff driver to play spoiler.

Who’s In a Must-Win Situation Going into Kansas?
Harvick Still Looking For Playoff Win
%d bloggers like this: