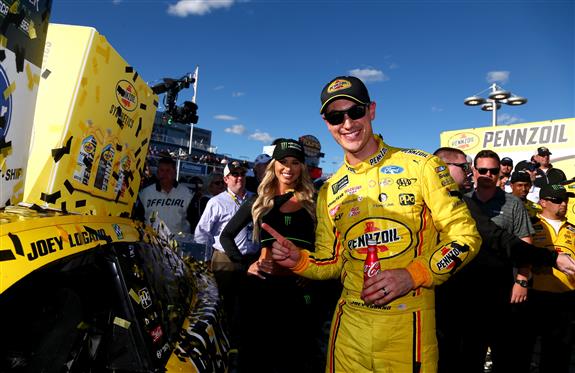 Coming into the Pennzoil 400 at Las Vegas Motor Speedway, nobody knew quite what to expect. With the debut of a new rules package, this race was one of the most hyped of the year. After a race that saw no on-track incidents, Joey Logano held off a last-lap charge by Brad Keselowski to claim the win. This is Logano’s first win since his 2018 championship, and 22nd of his career.

Calm Before the Storm in Stage 1

The opening laps of the Pennzoil 400 were all about defending winner Kevin Harvick. After starting from the pole, Harvick led the opening 43 laps. He only gave up the lead to pit under green. The 4 Mustang would lead all but 18 laps in the first 80-lap stage. At times during Stage 1, Harvick had a lead of more than 4 seconds. This would be the largest advantage anyone had all day. This marks Harvick’s second stage win of the year, after he also won Stage 2 in Atlanta.

Besides Harvick’s domination, the story of Stage 1 was pit road penalties. In the midway pit cycle around lap 40, Kyle Larson, Austin Dillon, Ryan Blaney, and Michael McDowell all had pit problems. For Dillon, Larson, and McDowell, it was too many men over the wall. This unforced error by their pit crews was just a result of bad luck. The 42 had a crew member’s hand graze the pit stall while catching a tire.

Blaney in the 12 was forced to pit again with a left rear tire that was going flat. The third Penske driver had a day far from expectations. Unfortunately, Blaney did not deliver in the Pennzoil colors for the race sponsored by his team’s partner.

The caution that ended Stage 1 would be the first yellow flag of the Pennzoil 400 on lap 82. Under this yellow, Brad Keselowski took over the lead with a 2 tire pit stop. Paul Wolfe made this daring pit strategy call hoping it would pay off big. This bet, likely a result of last week’s win, was in an attempt to win back-to-back races. The Stage 2 restart would see Brad pull away thanks to a push from teammate Joey Logano.

Brad’s 2 tires would eventually fade, as Logano, Busch, and Harvick would all pass him by lap 100. Not long after, Logano and Kyle Busch would be trading the top spot multiple times per lap, back and forth, in a showing of incredibly tight racing. Busch would take the top spot on lap 120, and led until he pitted again. However, this pit stop would change the course of the day for Kyle Busch in a bad way.

For Kyle Busch, his issue in the pits was self-inflicted and potentially cost him the race win. While making his pit stop, Busch was charging onto pit road too quickly, and was caught speeding in section 1. This penalty sent him back to 24th place, 1 lap behind the leaders. While Busch would recover, it was not the win Kyle was expecting. Busch was going for the weekend three-peat after winning Friday’s Truck race as well as Saturday’s Xfinity race.

Under this pit cycle for the Pennzoil 400, one driver rolled the dice hoping for a lucky break. Sophomore driver William Byron was instructed by Chad Knaus to stay out and lead some laps. Knaus and Byron were hoping for a caution, to gain lots of track position. However, the caution never came, and the 24 would pit for fuel-only on lap 149.

The eventual Stage 2 win in the Pennzoil 400 would go to the driver of the Pennzoil 22, Joey Logano. Logano took over the lead after Byron made his pit stop, and held on to win the stage. Even though he led the field onto pit road after the stage, one driver would pull off a big gamble and stay out. This driver would start the final stage in the lead.

A Busch brother leading at Las Vegas Motor Speedway is not much of a surprise. But most would expect it to be Kyle. Kurt Busch, in just his third start for Chip Ganassi Racing, started the final stage of the Pennzoil 400 up front. Amazingly, Kurt was able to hold the lead from Harvick and others for several laps. In all, the 1 Chevrolet led 18 laps before Harvick passed him. This marked Kurt’s first time leading at Vegas since 2016. After finishing 5th, this would turn into his first top 5 at his home track since 2005.

Harvick eventually passed Kurt for the top spot on lap 188, as Kurt’s older tires started fading. Logano would take over 2nd place from Kurt with 75 laps to go, and took the lead on lap 211. Just 4 laps later, Joey would make his final pit stop, giving Kyle Busch the lead for a brief period. After this final pit cycle, Logano would retake the lead. Logano was then in a dogfight for the top spot with Brad, Harvick, and Kyle Busch.

Throughout this final stint, the race for the lead between the Penske duo was incredible. Brad was pulling off slid jobs on Joey, but the 22 would recover and repay the 2 with another slider.

On the last lap, Logano appeared to have the win secured, until coming out of turn 2. Brad had an amazing run up in the high lane, while Logano ran the bottom to maintain position. Heading into turn 3, Brad pulled off a last-chance slide job, and got to Logano’s inside by turn 4. However, Joey just barely stayed ahead of the 2 as they both nearly hit the outside wall, and held on for the win. This Pennzoil 400 marked Team Penske’s second ever 1-2 finish at Las Vegas, a role reversal of results from 2016.

With the only cautions of the Pennzoil 400 being the two stage breaks, this was the first Cup race without an on-track incident since October 2002 at Talladega. The tight, compact racing on display in the closing 150 laps showed positive signs for the new rules package. However, NASCAR was not entirely satisfied with how Stage 1 played out.

While driving the number 22 Ford Mustang, Jory Logano scored career win number 22 in the Pennzoil 400. This win is his first since becoming the Cup Series  champion last season, and locks him into the 2019 Playoffs. For two straight weeks now, a Team Penske Ford has won in a close finish decided on the last lap.

In stop 2 of the West Coast Swing, the Cup Series will visit Phoenix’s ISM Raceway next Sunday. The Ticket Guardian 500 is set to go green March 10th, with coverage on Fox, MRN, and SiriusXM NASCAR Radio Channel 90 at 3:30 PM EST. As the all-time wins leader at Phoenix, can the ‘cactus king’ Kevin Harvick return to victory lane again? It would be his 10th win at the desert mile, but plenty of others will have a shot at the victory.