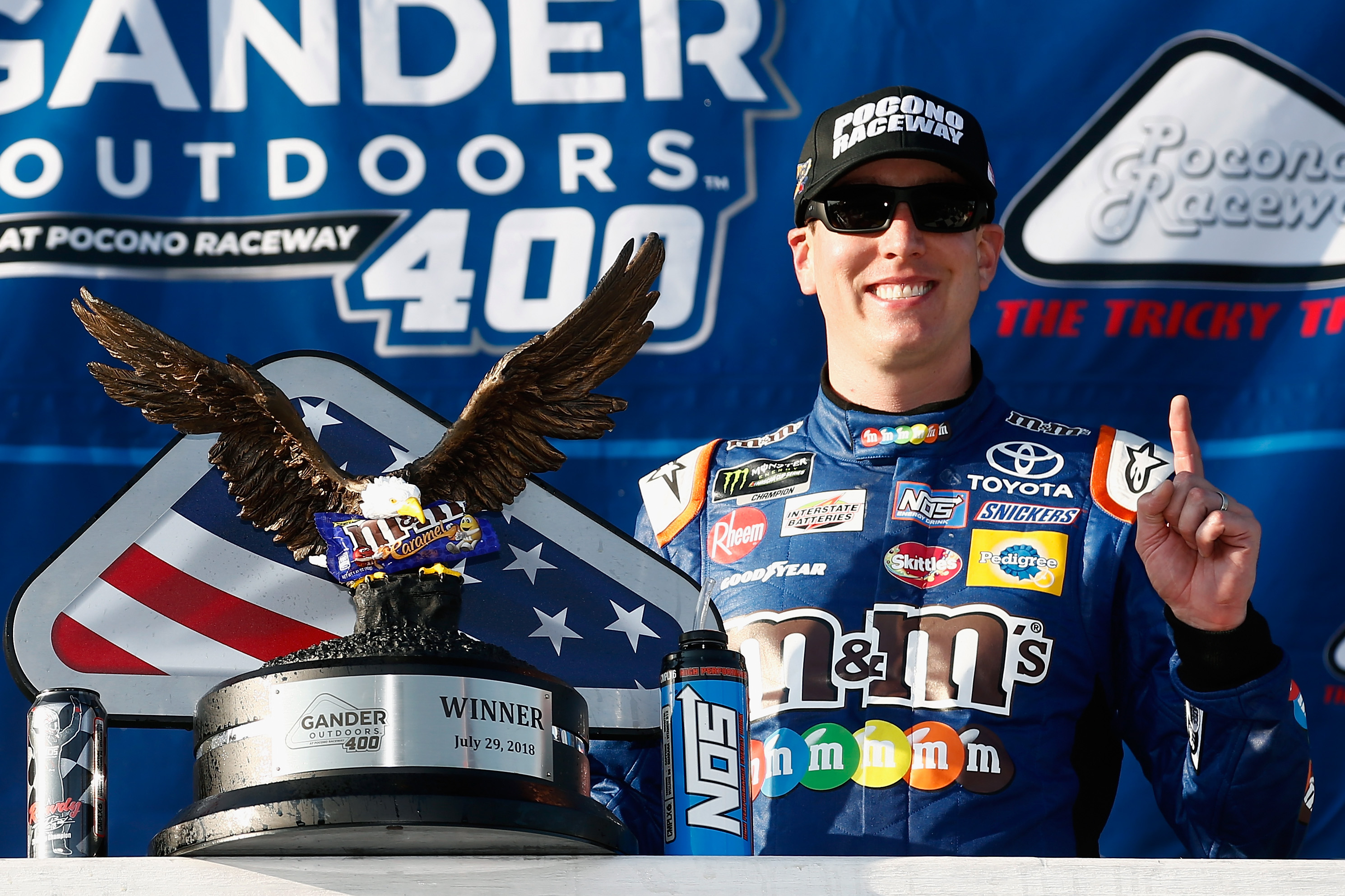 Coming into the 2nd Pocono race of 2018, all eyes were on the duo of Kevin Harvick and Kyle Busch. Last week at New Hampshire, Harvick moved Busch for the win, stealing valuable Playoff points. Busch in particular was looking as strong as ever at Pocono, winning Saturday’s Truck race in dominating fashion. However, Harvick started the weekend with the fastest car. It was sure to be a 400 mile duel for the win at Pocono between these 2. It was the 2 of them in the center of some prerace controversy as well. They both qualified 1-2, but both cars failed inspection. As a result, the 4 and the 18 were forced to start from the rear. Even though Harvick had the fastest car, it was another weekend sweep for Kyle Busch.

Saturday Starts Off With Historic Truck Win for Busch

Kyle Busch’s race weekend would start with the Truck Series race at Pocono. In his final start of 2018, Busch was looking for his 51st career win, in Truck number 51. This mark would tie him with Ron Hornaday Jr. for the series’ all time wins leader. Busch was nearly flawless in this race, leading 43 of 60 laps from the pole. Busch had his focus set on the weekend sweep after the positive results from the Truck race.

Besides Busch’s historic run, the KBM team was at the center of another issue on Saturday. Prior to Truck Series qualifying, Noah Gragson was forced to give up his seat to Erik Jones. Gragson visited the care center prior to the morning time trials, citing flu-like symptoms. Doctors refused to clear him for qualifying or the race.

Gragson was more than disappointed to miss this race, but it was not an entire loss for the 18 team. They received a medical waiver from NASCAR, so Gragson is still Playoff eligible.

In the substitute role, Erik Jones ran an impressive runner up to Busch, making his 1st Truck Series start since 2016. It was a bit of a homecoming for Jones, as this was the team he took to the 2015 Truck championship.

Qualifying Fiasco Puts New Faces Up Front at the Start

During qualifying on Saturday, Kevin Harvick and Kyle Busch paced the field. Harvick, who is 0-for-35 at Pocono, won the pole by a large margin over the 18 of Busch. After the session however, the 4, 18, and 11 other cars failed post-qualifying inspection. Because of this, 13 cars started the race from the rear of the field.

As a result of the shuffling starting lineup, Daniel Suarez was named the polesitter for Sunday’s race. This marked his 1st career pole, and the 1st for a Mexican-born driver in the Cup Series. Suarez would lead the 1st 21 laps, holding off challenges from teammate Denny Hamlin.

Stage 1 did not have any cautions, a normality at this point in the 2018 season. However, pit strategy led to much drama in the opening 50 laps. Chase Elliott would pass Hamlin after pit stops for the lead and the Stage win. Behind Elliott was a determined Kevin Harvick. Harvick started 29th, and rallied to P2 by the end of Stage 1. Kyle Busch, who started 28th, would also gain Stage points, finishing 4th in the opening run.

For 2 straight weeks now, Chase Elliott has won a stage in a Cup race. This is a great sign for the struggling Hendrick Motorsports, as they have yet to win in 2018. Elliott said that he hoped the New Hampshire Stage win was “not a fluke,” and it does not appear to be.

A timely caution occurred on lap 84, when Cole Whitt hit the wall. This happened during the middle of a green-flag pit stop cycle. The yellow gave the top spot to Harvick, the fastest car on track. When Harvick took the lead, he appeared unbeatable, leading the way to the Stage 2 win.

Some Capitalize While Others Stumble in Final Stage

Due to an earlier pit stop, William Byron stayed out under the stage ending caution. Amazingly, he was able to hold off a hard charging Kyle Busch in spite of older tires. Byron would eventually fall into the clutches of Busch, but only after leading 10 laps.

Not long after Busch passed the 24 for the lead, the 2 of Brad Keselowski blew a tire and spun on lap 122. Under this caution, Kevin Harvick and Aric Almirola made contact on pit road. This contact would force both the 4 and the 10 to pit again to fix their damage. As a result, the fastest car would be forced to restart in the back of the pack.

To Harvick’s benefit, a caution came out just seconds after the field took the green again on lap 125. The 00 car put fluid in the groove in turn 1, forcing a lengthy cleanup. Harvick was able to catch back up to the pack and start picking off cars again.

With 5 laps remaining from Pocono, Bubba Wallace in the 43 car had no brakes. Unfortunately for him, he was unable to slow down much going into the heavy breaking zone in turn 1. Even through he turned his car through the grass, he still had major contact with the outside wall at a very high speed. Wallace called it “the biggest hit of my career,” as the right side of his car was destroyed. This wreck would bring out a brief red flag, but Bubba climbed out of his car nearly instantly. Thankfully Wallace was uninjured, as this wreck was reminiscent of other major crashes at Pocono.

After the 43’s issue, only 3 laps were remaining from Pocono. Kyle Busch was up front, looking for a weekend sweep and his 6th win of 2018. However, the rest of the front runners (minus Erik Jones) were looking for their first victory of the year. Suarez and Elliott were both right behind Busch, with Alex Bowman also in the mix. On the restart, Aric Almirola spun after contact in turn 1. This caution would lead to an Overtime finish, with many hungry drivers right behind Busch.

On the Overtime restart, Jones and Suarez entered turn 1 while 3-wide for the lead with Busch. However Busch was able to power through to a weekend sweep at Pocono. This also marked Busch’s 6th win of 2018, tied with Harvick for the most Cup Series victories.

Both parts of the Pocono weekend sweep were historic accomplishments for Kyle Busch. As stated above, Saturday’s win tied Kyle Busch with Ron Hornaday Jr. for the most all-time Truck Series victories. In addition to this, Busch is now tied with Tony Stewart at 49 Cup Series wins, which is 13th on the Cup Series’ all-time win list. In response to hearing this, Busch said “Tony Stewart’s one of the all-time best and one of the drivers I was a fan of growing up. It’s awesome to be able to tie him.”

Week 22 of the Monster Energy NASCAR Cup Series season is a stop at a fan favorite racetrack, Watkins Glen International.  Be sure to catch every lap of the road racing action! The GoBowling.com at The Glen will be Sunday, August 5 at 2:30 PM EST. Coverage will be on NBC, MRN, and SiriusXMNASCAR Radio Channel 90. The 2nd road course race of the year is sure to be action-packed, as it offers an opportunity to unseat the ‘Big 3’ from victory lane.