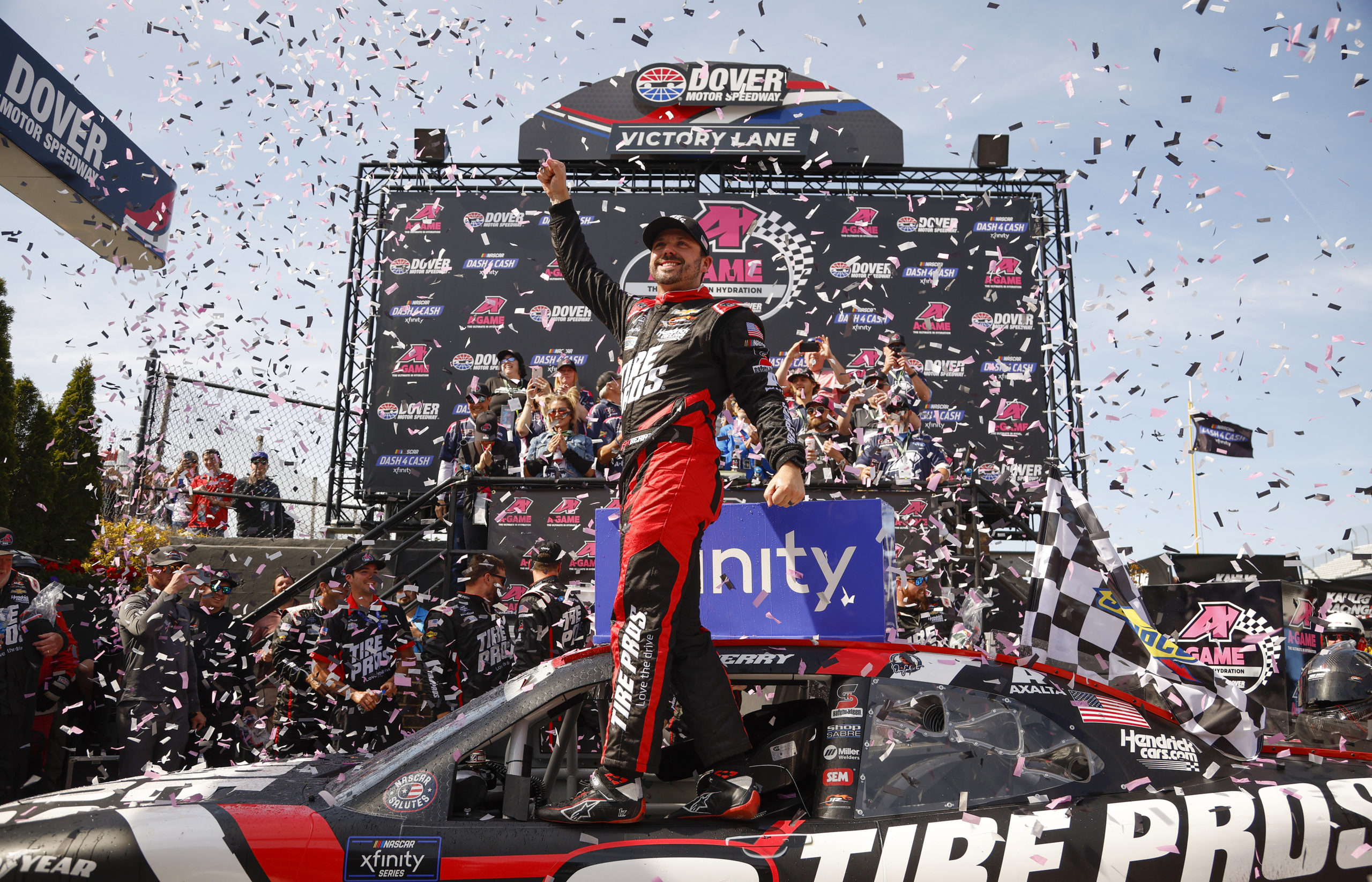 DOVER, Del. – After finishing second in this race last year, Josh Berry claimed victory at Dover Motor Speedway. In a banner-day for JR Motorsports, all four of their drivers finished in the top-five spots. Justin Allgaier was the class of the field for most of the day, but lost ground on a late pit stop. With his third career Xfinity Series victory, Josh Berry is now the sixth driver to lock themselves into the 2022 Playoffs.

JRM cars as a whole were nearly unbeaten all day, as they also took both Stages. Stage 1 went to Sam Mayer, while two-time Dover winner Justin Allgaier took Stage 2. Allgaier appeared to be well on the way to his maiden win of 2022, until the final trip down pit road. Even though the 7 led a race-high 67 laps, he would restart fourth after his last pit stop. While Allgaier would rally to second, he ran out of time to chase down Berry, eventually following his teammate by six-tenths at the checkered flag.

“I struggled a lot on the bottom on the restarts and just kept trying to work to get better,” said Berry. “It’s just credit to these guys, the pit crew did a phenomenal job today, they executed when we needed it. And we were there when it counted.

“I went toe-to-toe with Justin Allgaier and he’s so freaking good here. Gosh, I thought he was kind of out of it after that pit stop and then he was right back to second and I thought, ‘here we go again.’ ”

JRM putting four cars in the top-five is a feat not seen often in the Xfinity Series. Joe Gibbs Racing last achieved this level of dominance at Darlington in 2013.

Behind Berry and Allgaier, Ty Gibbs was third, then Noah Gragson and Sam Mayer rounded out the top five. By finishing fourth, Gragson took home the fourth and final Dash4Cash $100,000 bonus. Gragson now has five of these bonuses in his career, tied with Elliott Sadler for most all-time. The rest of the top 10 were AJ Allmendinger, Brandon Jones, Sheldon Creed, Riley Herbst, and Ryan Sieg.

The NASCAR Xfinity Series returns to the track at Darlington Raceway, for the Mahindra ROXOR 200. As part of the Official Throwback Weekend of NASCAR, one driver will celebrate big in victory lane. Coverage begins Saturday, May 7 at 1:30 p.m. ET on FS1, MRN, and SiriusXM NASCAR Radio Channel 90. Josh Berry will try to go back-to-back at another track where he was second last year.

Who Can Conquer the Concrete at Dover?
Chase Elliott Claims First Win of 2022 at Monster Mile
%d bloggers like this: