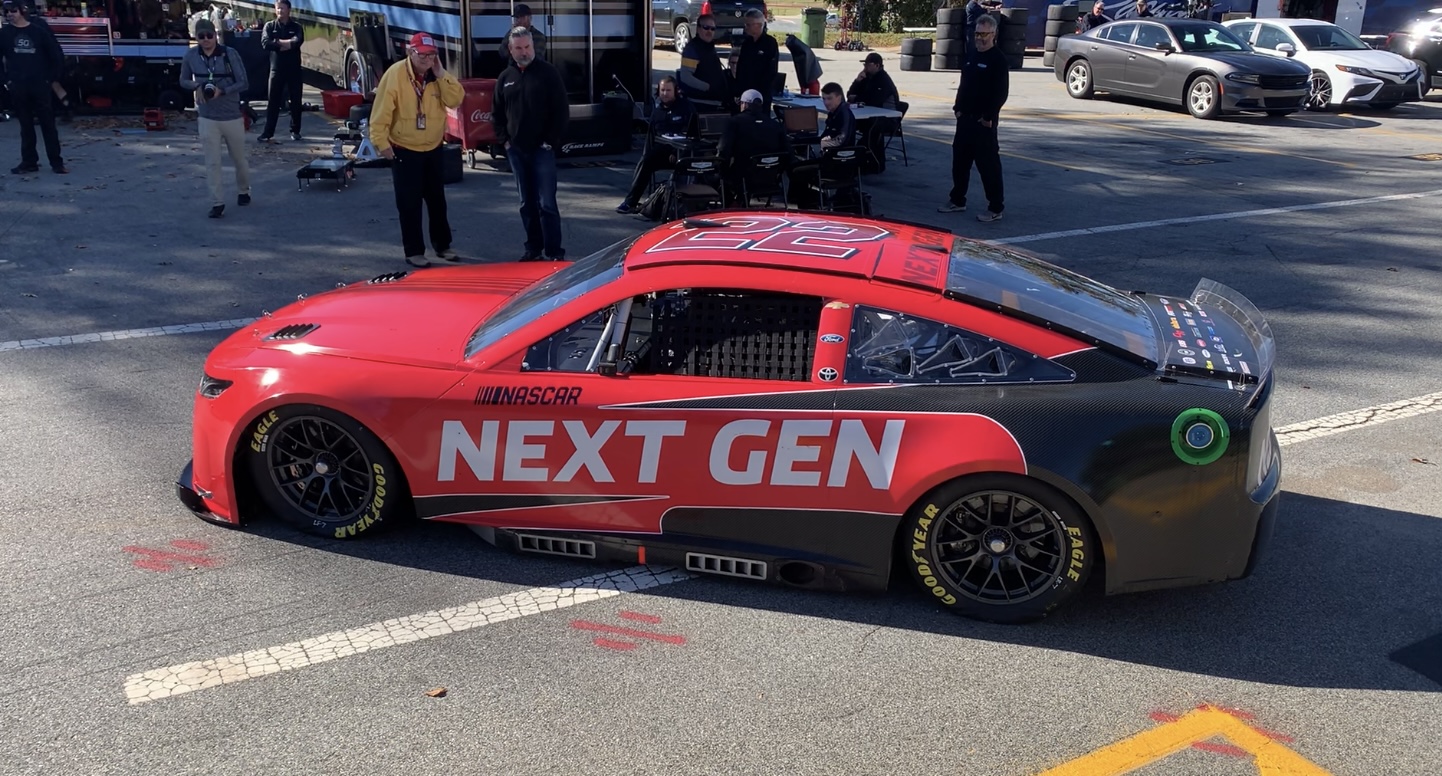 Stewart, who was testing on behalf of Goodyear, made the most laps around the 1/4th mile flat asphalt oval. With a track that mimics the Los Angeles Coliseum, which will hold the debut race (the Clash) for NextGen in 2022, Goodyear turned many laps to gather data. ‘Smoke’ did kick up some smoke, spinning the car twice, but avoiding any wall contact.

Dale Jr. was the next behind the wheel of the test car with Clint Bowyer just after him. Both turned around 25-35 laps before bringing the car back to the garage for the day. From each, good comments about the car followed.

“It was fun,” Dale Jr said after climbing from the car. “The car does everything better than anything I’ve ever drove in NASCAR. The braking ability and braking performance of the car is probably the one thing that stood out to me the most. That was the one thing that took the most to get used to. I’m using the brake pedal the same way I’ve used the brake pedal all my life but this car stops so much better. I’m over-slowing the car way too much getting into the corner. But it has a bigger tire on it, more grip. It has better drive off the corner with that tire. It just does everything better. Doesn’t feel too unfamiliar. It doesn’t feel too strange. It does everything like a stock car, just better.”

“It was awesome,” Bowyer told media after his run. “Very impressed. Very impressed with the grip level, the braking power, the tire that Goodyear chose for this.”

“The shifting,” Bowyer continued after being asked how this will help him in the booth. “I didn’t know they were in second gear! That’s a new one for me bud. Even on a track like Martinsville, you’re fourth gear. Give me high gear, right? I went out there and put it in fourth gear. I was actually practicing shifting because the shifter is so much different than what we had. But the brakes are phenomenal, that’s something that caught me off guard. A little bit better than what we had. Part of that is the brake package, part of that is the car itself, the suspension components. The tire. The tire is wider, quite a bit wider. An inch and a half wider than what we had last year. That much more rubber on the race track is more grip for those guys to go out and do business.”

With such high praises today, optimism for the NextGen car continues to rise as the 2021 NASCAR season winds down. Only time will tell if that optimism was worth the hype. That being said, today’s test looked to be a major step in the right direction.

Larson Lights Them Up Again in Kansas
Who Finds Martinsville Victory Lane at the Right Time?
%d bloggers like this: