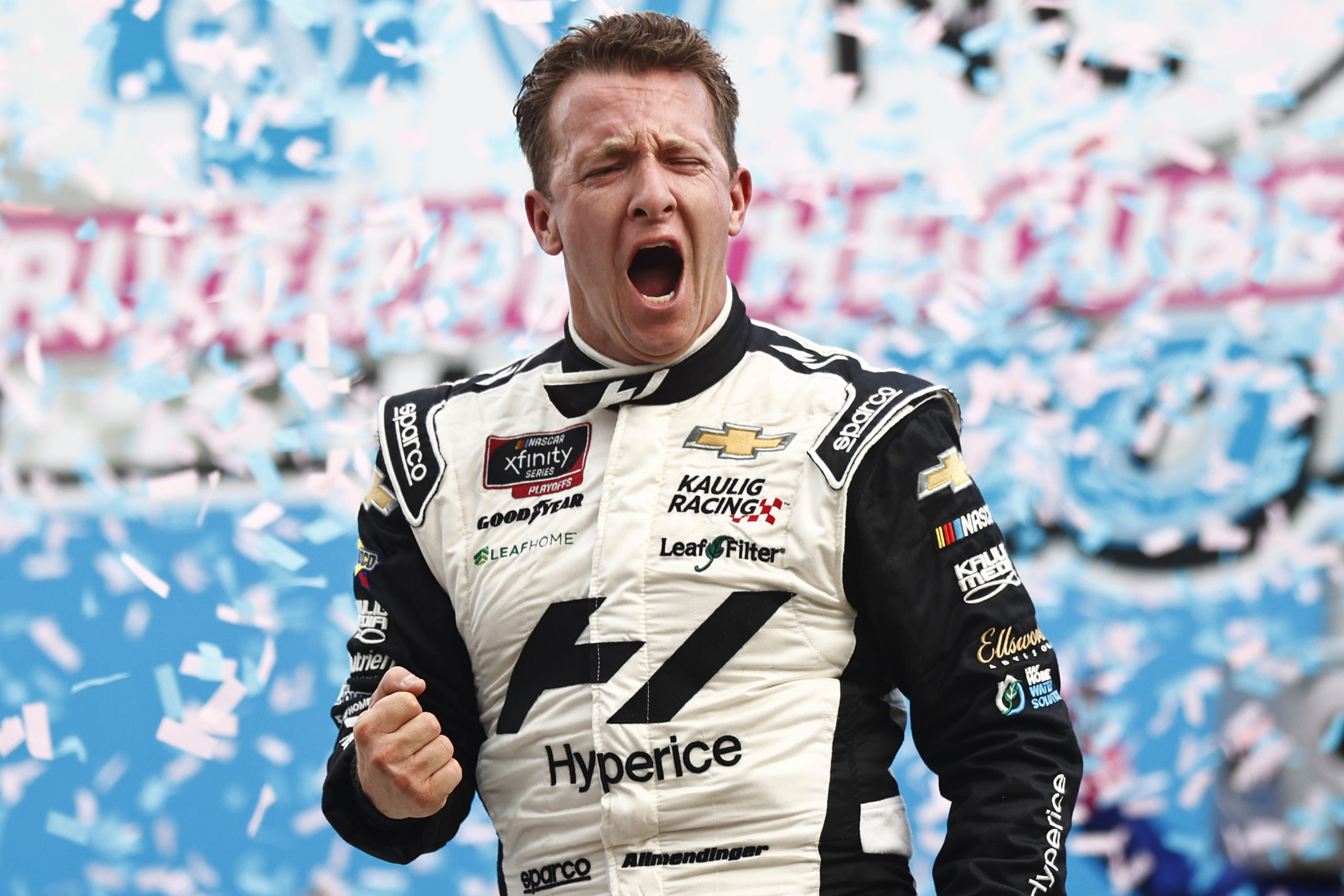 CONCORD, N.C. – There may have been no rain this year, but the result at the Charlotte Roval was the same. AJ Allmendinger earns another road course win for Kaulig Racing. The 16 team now moves onto the Xfinity Series Round of 8 with more momentum than ever before. With this victory, is Allmendinger the sole championship favorite heading into the final four weeks?

From the pole, Austin Cindric looked stout early on. However, a blown backstretch chicane by the 22 forced a stop-and-go penalty, thus the lead went to Daniel Hemric. Cindric would eventually short-pit Stage 1, handing an unchallenged Playoff point to the 18 team.

By virtue of not pitting under a late caution in Stage 2, Hemric held the lead once again. Much like the Charlotte oval race in May, the 18 would sweep both Stages. After Stage 2, both Hemric and Justin Allgaier clinched a Round of 8 spot on points.

Ty Gibbs restarted the final 25-lap Stage as the leader on older tires, and the 54 initially took off. However, the handle would quickly fall away on the No. 54 Toyota, as Gibbs overcooked entry into the backstretch chicane with 19 laps left. Gibbs’ stop-and-go gave the lead to AJ Allmendinger, as the 54 fell like a rock.

As laps ticked by, Allmendinger’s lead only grew more and more. With five laps to go, the 16 had almost a 10 second advantage. However, Tommy Joe Martins pounding the wall would trigger one final caution, setting up overtime.

Allmendinger got a great jump in overtime and held off all charges to take home a third-straight win on the Charlotte Roval. With five wins now on the year, is Allmendinger the lone title heavyweight heading into the Round of 8? AJ’s closest rival Cindric has not won in almost two months. Meanwhile, the Kaulig 16 crew is firing on all cylinders.

“You all are what makes this so much fun,” Allmendinger said to the crowd chanting his name. “I’m just proud of everybody at Kaulig Racing. The big picture is the championship, but to get another win, three in a row here at the Roval, it means the world to me.”

And then there were eight.

Behind Allmendinger, Playoff contenders Cindric, Hemric, Justin Haley, and Brandon Jones were the top five. Noah Gragson, Preston Pardus, Myatt Snider, Justin Allgaier, and Sam Mayer were the top 10. Hear from many of these drivers below for postrace reactions.

.@DanielHemric rallied from restarting deep in the pack in overtime to finish 3rd, and move on in the #NASCARPlayoffs pic.twitter.com/4Spi83adrx

.@Justin_Haley_ is all smiles after some tough racing late with non-Playoff drivers and a distant 4th-place effort from the Roval. #NASCARPlayoffs pic.twitter.com/yuQuLLXV1b

.@HBurtonRacing entered the Roval as the last man in the #Roundof8, and escapes it by advancing on with a tough 15th-place finish. #NASCARPlayoffs pic.twitter.com/PWLYEkc752

.@NoahGragson recovered from early damage to come home 6th at the Roval, advancing onto the Round of 8. However, it never rained like he wanted. #NASCARPlayoffs pic.twitter.com/AFFTpBeZak

Here’s his thoughts on a strong rebound and how the encouragement from the spotter stand helped. #NASCAR pic.twitter.com/3kWPlwhW6j

The Xfinity Series Round of 8 kicks off next weekend at Texas Motor Speedway. Coverage begins Saturday at 3:00 p.m. ET on NBC, PRN, and SiriusXM NASCAR Radio Channel 90. A year ago, non-Playoff driver Harrison Burton got by Noah Gragson in the final corner. Can the 20 repeat this in a quest for a ticket to Phoenix? All eight remaining Playoff drivers head to the Lone Star State eyeing a trip to the Championship finale.

Sheldon Creed and RCR Announce Full-Season Sponsor For 2022
Larson Makes Late Pass to Win the Roval
%d bloggers like this: