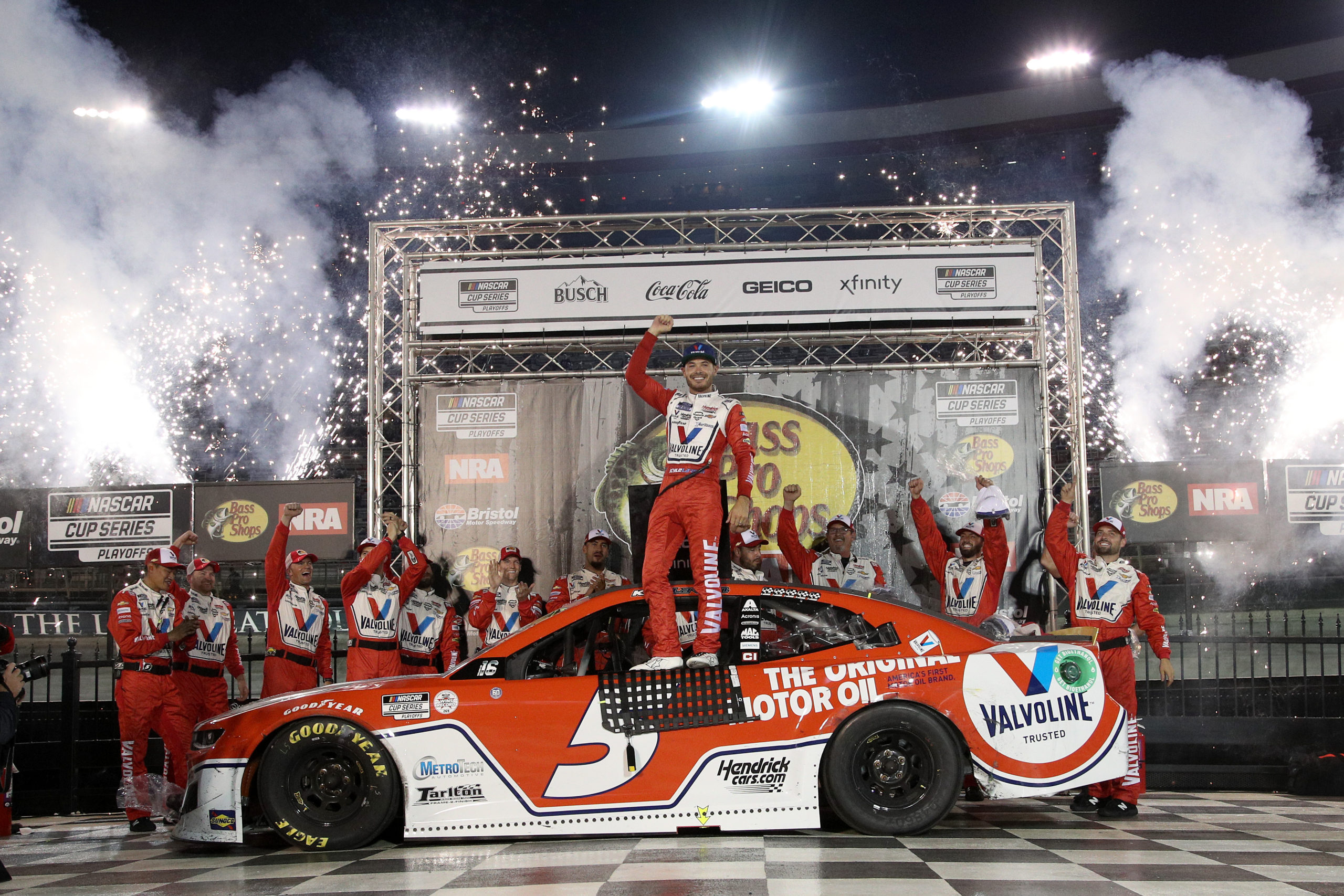 BRISTOL, Tenn. – For the sixth time in 2021, Kyle Larson pulled into victory lane at the Bristol Night Race. Aside from another 5 win though, the end of this race will be remembered for tensions between Chase Elliott and Kevin Harvick. Larson’s win largely came at the hand of Elliott, as the 9 blocked Harvick’s No. 4 Mustang long enough for the 5 to get the lead in the closing laps. As Larson was celebrating a win on one of his favorite tracks, Harvick and Elliott had a heated conversation on pit road. In addition, the cut line drama in this elimination race ended with four fewer chairs in the Playoffs.

From the drop of the green flag, arguably the best car in Bristol was the 11 of Denny Hamlin. Once he took the lead on lap 91, he held on for a ninth Stage win of the year, also his fourth of the Playoffs. The Darlington winner was trying to leave the Round of 16 with a pair of victories. Stage 2 would also be much of the same for Hamlin, as the 11 soon found the top spot again.

Midway through Stage 2, Aric Almirola’s No. 10 Mustang began smoking. The 10 team diagnosed the issue as a leaking oil line, which was quickly swapped out on pit road. Amazingly, Almirola did not lose the lead lap, as this change occurred under caution. This moment of resilience for the Stewart-Haas team subsequently showed great coolness under the most immense Playoff pressure. The bad oil line was transplanted for a new one in no time at all.

Aric Almirola gets black flagged and hits pit road with smoke pouring out from his car. pic.twitter.com/gTgjZw5Eqe

Almirola would continue on in the race, but mired back in the pack. The coming restart would see Kyle Larson inherit the lead, and the 5 held on to win Stage 2 over Hamlin. After Stage 2, Kevin Harvick was one of a few cars who elected not to pit. The next several laps were a great back-and-forth battle between Harvick and Ryan Blaney, with both Mustangs swapping the lead. However, Larson would reassume control with just over 150 laps left.

Racing up front got physical, and one contender would evidently find the outside wall with a tire issue. Not long after a restart, Hamlin and Larson made contact racing for the lead. The 11 came up into the 5 on corner exit, cutting his right front tire. Hamlin grazed the wall, but had minimal damage. While Hamlin was out of the running for the win, the 11 did battle back for a gritty top 10.

The good news: Denny Hamlin and Kyle Larson have both clinched a spot in the next round.

The bad news: the two got together, Hamlin cut a tire, then Hamlin hit the wall. #NASCARPlayoffs | NBCSN pic.twitter.com/mPLt5I4TSD

The coming restart would see Chase Elliott take command over Larson, and Harvick also got to second. Harvick methodically stalked Elliott down, taking the lead once again after pinching the 9 into the wall. As a result of this, Elliott was forced to pit with a tire down. Now two laps behind the leaders, Elliott decided to make Harvick’s race a lot tougher as lapped traffic. Elliott would hit the 4 with 20 laps left, causing the 5 of Larson to inch ever-so-closer to the lead. Elliott’s aggression towards Harvick cost the 4 a first victory of the season, as Larson made the winning pass in the final four laps.

Both Harvick and Elliott voiced their frustrations to each other on pit road postrace. The two drivers parked near each other and had a very heated conversation. Neither one was pleased in their interviews, as Harvick said he wanted to “Rip somebody’s freaking head off,” after coming oh so close to a victory. Afterwards, Harvick’s comments were met with a resounding chorus of boos from the crowd.

An exchanging of words.

Behind this melee at the front of the field, William Byron was trying everything to fend off both Aric Almirola and Tyler Reddick. The 24 held the last transfer spot into the Round of 12 by the slimmest of margins, gaining positions one-by-one. Meanwhile, the handle fell away on both the 10 and the 8, as they slowly faded back and fell out of the points battle. In the end, finishing third would transfer Byron through to the next round by just two points.

In addition to Reddick and Almirola, the other two eliminated drivers were Kurt Busch and Michael McDowell. Busch just ran poorly all night, unable to rebound after an early Richmond exit, while the 34 was in a must-win scenario to advance.

Nearly lost in all of the Harvick/Elliott drama, Kyle Larson won for the sixth time this year. This marks Larson’s first win at Bristol Motor Speedway, a place he called “by far my favorite track. This is why. You [fans] are amazing, loud. We feel the energy while we’re out there racing. Thanks, everyone, for spending your hard-earned money to come watch us putting on a show. I look forward to the rest of the year.”

“That was an awesome race,” Larson went on. “It was so cool to be able to race there for the win. Obviously Harvick and Chase got together. Chase was upset. Kind of held him up. It got Harvick having to move around and use his tires up off the bottom.”

“I started to get some dive-ins working off of two, got a big run, decided to pull the trigger, slide him, squeeze him a little bit. Then he had me jacked up down the frontstretch. It was wild.”

Behind Larson was Harvick, so close to a maiden victory on the 2021 campaign. William Byron, Ryan Blaney, and Alex Bowman would complete the top five. Brad Keselowski, Martin Truex, Jr., Erik Jones, Denny Hamlin, and Matt DiBenedetto would round out the top 10.

Playoff Standings Reset for Round of 12

With a series-high sixth win on the season, Kyle Larson leaps back up to the points lead, with 3,059 points. The Round of 12 features all four cars from Hendrick, all four Gibbs Toyotas, all three Penske cars, and then the lone wolf of Kevin Harvick.

Let the Round of 12 begin!@KyleLarsonRacin holds the top spot with 59 bonus points carried through. #NASCARPlayoffs pic.twitter.com/R6UikAUMDl

The Round of 12 will begin next weekend at Las Vegas Motor Speedway, as the South Point 400 is the next challenge. Coverage begins Sunday, September 26 at 7 p.m. ET on NBCSN, PRN, and SiriusXM NASCAR Radio Channel 90. Bristol victor Kyle Larson also won at Las Vegas in the spring. Will the 5 pull off a sweep, or will another contender win big in Sin City?

Allmendinger Ends Regular Season on Top
Who are the Xfinity Series Playoff Favorites?
%d bloggers like this: