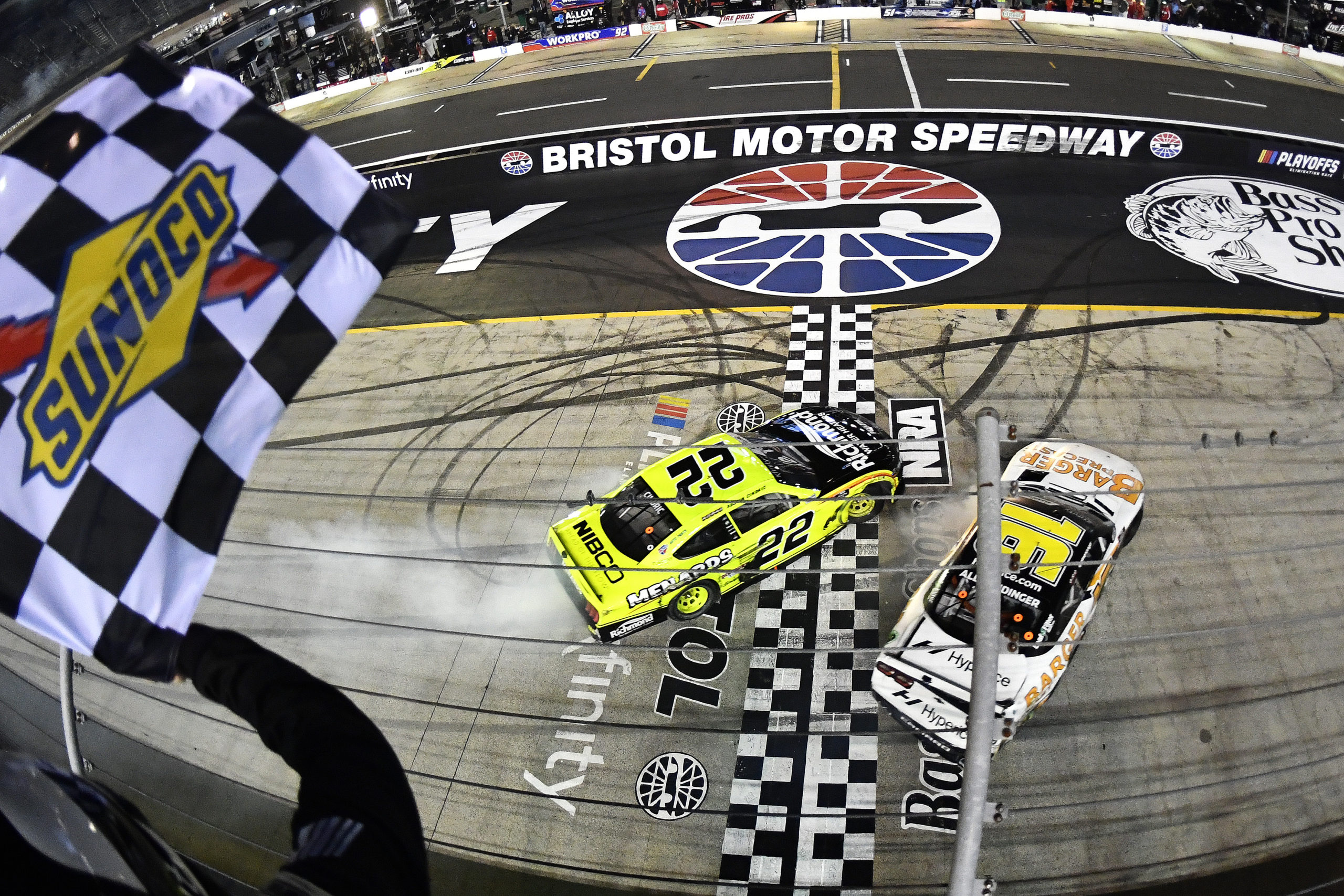 BRISTOL, Tenn. – Tempers flared, sheet metal was torn up, and the regular season championship came down to the wire. AJ Allmendinger picked up another victory at Bristol, taking the lead on the final lap and also sliding sideways across the line. This victory propelled the 16 to the regular season title by the narrowest of margins over Austin Cindric. The Kaulig team now enters the Xfinity Series Playoffs as the top seed over the defending champion.

A Night to Remember for Allgaier

From the drop of the green flag, Justin Allgaier was a man on a mission. The JR Motorsports No. 7 took the Stage 1 win after starting second. Allgaier was also a close runner-up to Daniel Hemric in Stage 2, trying to reassert himself in the title fight with a Bristol win. Allgaier only lost out in Stage 2 after the lapped car of Joe Graf, Jr. spun the 7 from the lead. Thankfully Allgaier was able to continue, but he lost the top spot.

Justin Allgaier thought he was clear of Joe Graf Jr.

After Stage 2 however, the 7 and the 9 of Noah Gragson both got busted for speeding on pit road. As two of the fastest cars all night, both JRM Chevrolets would tear through the field with over 100 laps left.

Allgaier’s march forward stalled out behind his young teammate Sam Mayer. After trying to get by the 8 for second multiple times, Allgaier made contact with the rookie in turn one. This late spin would lead into Overtime to close out the Xfinity regular season.

On the restart Austin Cindric led, as he inherited the lead earlier from Mayer. Mayer and Cindric had quite the battle for the lead earlier, as they both bounced off the wall racing each other aggressively. Cindric appeared to be a sitting duck out front however, as Allgaier lined up right behind him. Also to his inside was AJ Allmendinger, who was in a tight fight against the 22 for the regular season title.

Coming to the white flag, the leaders were three-wide as the 16 and the 7 tried splitting Cindric. Allgaier ran the 22 wide in turn one, allowing Allmendinger to squeeze by on the inside.

By the final corner, Allmendinger appeared to have the race won, but not so fast. The 22 caught the 16 coming out of turn four and the two made contact. Both drivers slid sideways across the finish line, with Allmendinger just edging out Cindric.

Turn one after the checkered flag quickly became a junk yard with destroyed racecars everywhere, including the winner. Allmendinger’s car was destroyed after slamming the inside wall, but he still walked away victorious. It was a finish truly reminiscent of the classic 1995 Bristol battle between Dale Earnhardt and Terry Labonte. This time however, AJ had to take a trip to the infield care center before celebrating.

ARE YOU KIDDING ME!?@AJDinger crashes, and wins anyway at @BMSUpdates! The win makes him the @NASCAR_Xfinity regular season CHAMPION! pic.twitter.com/BEYxVHfgcg

“That was crazy at the end,” Allmendinger said. “We had about a fourth-place car, and my team did a great job. We just kept trying to work on it. You got a chance on the bottom and I got in there and slid into Austin [Cindric] trying to throttle up and stay under him. Then into one Allgaier had a run and there was contact. Went down into the last corner and I expected to get run into, because it happened in the previous corner. It’s frustrating to get hit that hard coming to the checkered, but we’re battling for the win. It’s Bristol baby, this is what it’s all about!”

“I haven’t had a lot of chances to ever in my life win at Bristol. So you know what? If you have a chance to go do it, you gotta do it. If I don’t take that chance, I don’t belong in the racecar because my team deserves a win.”

“Not the way you want to finish a race like that, destroying a lot of racecars, but I love you guys! It’s Bristol baby, this is a dream come true this year! Whether you love me or hate me for that, you know what, just keep being you guys because this is what makes the sport badass, thank you!”

Also in Cindric’s interview, he proceeded to hear near-simultaneous boos and cheers from the crowd in attendance. Any way you slice it, emotions were high to close out the Xfinity regular season at Bristol, and we saw an all-time classic finish.

Behind the Allmendinger-Cindric duo, Riley Herbst, Justin Allgaier, and Brandon Jones were the top five. After leading a race-high 92 laps, the 7 would have to settle for fourth. Justin Haley, Harrison Burton, Myatt Snider, Sam Mayer, and Daniel Hemric rounded out the top 10.

Lost in the madness at the finish, the Xfinity Series 2021 Playoff field was also set. Allmendinger is now the number one seed over Cindric. In addition, the final three positions not decided before Bristol went to Brandon Jones, Riley Herbst, and Jeremy Clements.

The Playoffs are now on for the Xfinity Series, as seven races stand between 12 drivers and a championship. The opening round of the postseason is next weekend in Sin City, as Las Vegas Motor Speedway is the first race in the Round of 12. Coverage of the Alsco Uniforms 302 will be Saturday, September 25 at 7:30 p.m. ET on NBCSN, PRN, and SiriusXM NASCAR Radio Channel 90. Las Vegas in the spring went to Allmendinger as well, can the 16 keep momentum riding high again?