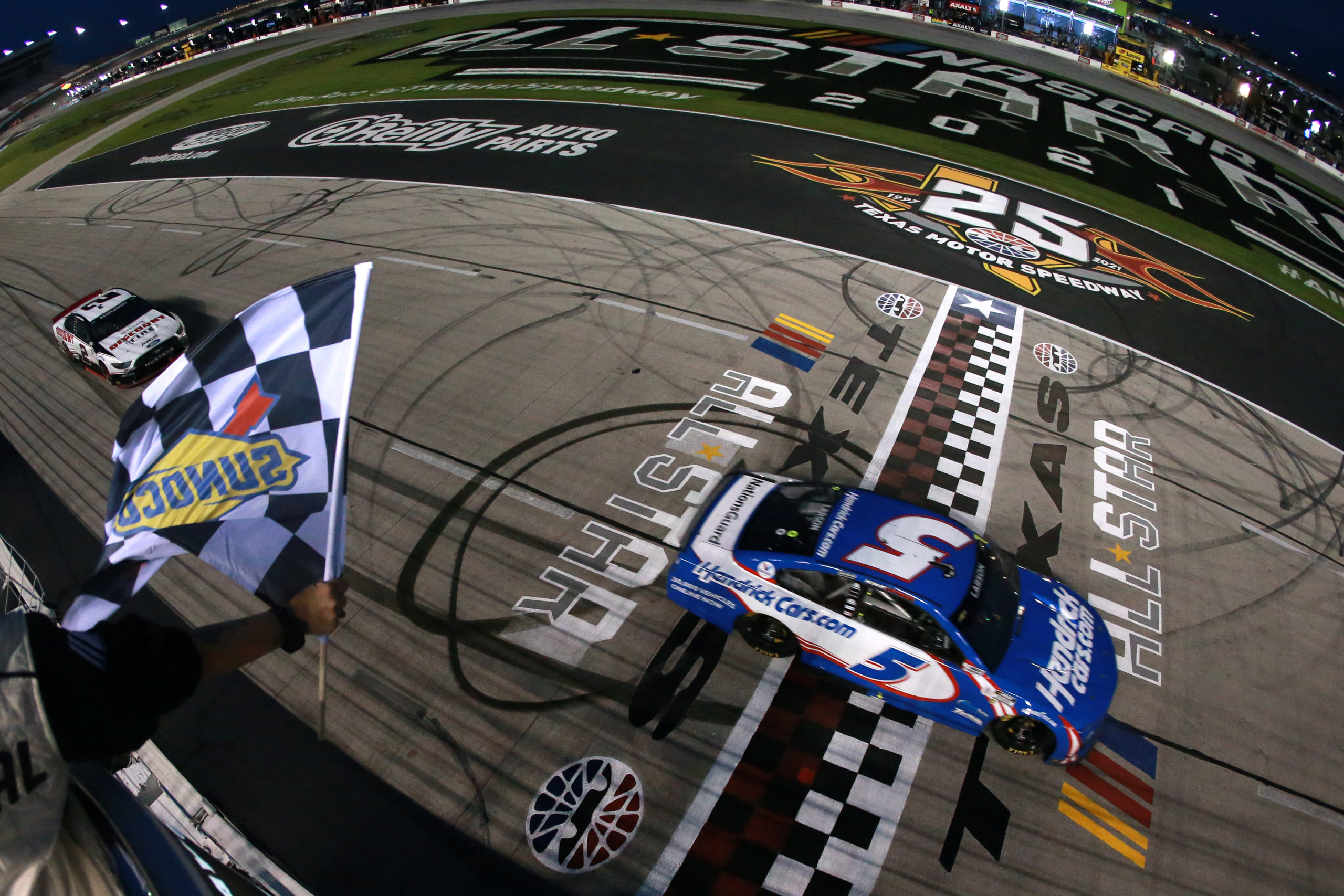 Ft. WORTH, Texas – For three-straight weeks now, Kyle Larson has bested the competition in the NASCAR Cup Series. This week however, it was for the $1 million payday at Texas Motor Speedway in the All-Star Race. Larson came into Texas with the last two points-paying victories, and leaves with another big win. Larson now also joins an exclusive club as multi-time All-Star Race winners. ‘Yung Money’ also won the exhibition race in 2019, so he has taken home the big check in his last two All-Star appearances.

Prior to the 100-lap All-Star event, the 50-lap Open race took place. Across three stages and the fan vote, this race allowed four additional drivers an entry into the feature race. Segment 1 went to Ross Chastain, as he stole it from Tyler Reddick in the closing laps. Reddick would rebound to win Segment 2, while Aric Almirola also took Segment 3. The fan vote winner was Matt DiBenedetto, who came home second to the 10 car. These four drivers all started the 37th All-Star Race from the tail of the field, rounding out the 21 competitors.

Stumble at Start for Larson

After starting from pole due to a random draw, Kyle Larson failed to lead lap one. Instead Kyle Busch took command for the opening laps, hoping to win the first 15-lap segment. Though Larson initially lost ground, the 5 powered back around the 18 to take the Round 1 win.

After Round 1, the top 12 positions were inverted. This oddly enough gave the lead to the 12 of Ryan Blaney to start Round 2. Round 2 was far from an easy drive for Blaney though, as he was nearly sent around on the restart after a big push from Ross Chastain. The 12 stayed on point for all 15 laps though, taking the second segment win.

With the entire field being inverted for Round 3, this gave the front row to Aric Almirola and Matt DiBenedetto. The Wood Brothers Racing No. 21 machine paced the opening laps of Round 3, only to be passed by Alex Bowman. The Ally 48 Chevrolet would hold on to take Round 3 over the 21.

The top nine being inverted for Round 4 gave the lead to Bowman’s teammate, William Byron. The 24 would maintain the top spot for the duration of this 15-lap sprint, and won Round 4 narrowly over Larson.

Round 5 would line up by average finish of the first four rounds, and last 30 laps with a mandatory green flag pit stop. Hendrick cars took the top three spots to start Round 5, as Byron and Larson led Chase Elliott. Alex Bowman quickly made it a Hendrick top four at Texas, but the quartet of drivers all had yet to pit. That would change on lap 76, as the top four all came in for service. During this time, Chase Elliott’s No. 9 team had the fastest pit stop of the night, earning the $100,000 bonus.

This strategy seemed to work out flawlessly for HMS, but it had one minor hiccup. Right as Brad Keselowski was finishing his pit stop from the lead, a caution came out for a spinning Ross Chastain. This gave the 2 the top spot for the restart over the HMS brigade.

The restart came with 11 laps to go in Round 5, and Byron gave Elliott enough push to clear Keselowski. Both the 24 and the 5 also got by the 2, as Elliott won Round 5. The 9 had to throw a big block on the 24 to hold the lead late though. By winning this 30-lap segment, Elliott would start first for the final 10-lap sprint. His teammates of Byron and Larson would also line up second and third.

"Anybody but a teammate? Sayonara. See ya, buddy." pic.twitter.com/3iicJlJhio

With Hendrick cars controlling the front of the pack, other contenders had to go for it on the restart. Ryan Blaney dove three-wide into turn one, which also allowed Larson to take it up high to get by Elliott. As Elliott and Larson were side-drafting each other though, Keselowski got by with a full head of steam. Larson rocketed back by the 2 with eight laps left, but did not get away. Over the closing laps, the top three of Larson-Keselowski-Elliott were all under a blanket for the lead. Ultimately, Larson narrowly edged out Keselowski at the line by two tenths.

WHAT A BATTLE FOR THE LEAD IN THE FINAL ROUND! @KyleLarsonRacin to the front! #AllStarRace pic.twitter.com/wmUIs93baR

“Honestly, I can’t believe it,” Larson said. “That second run there, we were really bad and I was like, ‘man, we’re in trouble.’ I went backwards that round, so I was like we’ve got an uphill battle. I did not imagine seeing myself winning this race today. Cliff (Daniels, crew chief) and everybody works so hard on this thing and made some good adjustments throughout the first, second and third rounds and got us in position.”

“That last restart worked out exactly how I needed it to. I wanted Chase to not get a good run down the back. Thankfully, I think the No. 12 got to his inside. I just shoved him down the back and he probably thought I was going to just follow him. I thought there had to be enough grip above where we’d been running for one corner. It was a little slick up there, but I was able to get it and hold him off from there. I can’t believe it.”

Kyle Larson has now won two of the last three All-Star Races, as he took home his first $1 million check in 2019. Larson is only the eighth driver in the 37-year history of the All-Star Race to win it multiple times. The only other active multi-time All-Star is Kevin Harvick.

Coming up just short of Larson was Brad Keselowski, who scores his third-career runner-up in the All-Star Race. The 2012 champion has yet to win this exhibition race. Chase Elliott, Joey Logano, and Ryan Blaney rounded out the top five, as the night certainly went to Hendrick and Penske. Alex Bowman, William Byron, Aric Almirola, Kyle Busch, and Kurt Busch were the rest of the top 10.

The last three weeks have seen the 5 team capitalize and win on three different racetracks, and also with three different rules packages. Hendrick Motorsports as an entire organization is firing on all cylinders, but Larson’s run could end in the championship. Can the 5 team maintain this impressive level of performance throughout the 10-week Playoffs? They show no signs of slowing down, as they look strong on all track types.

The next stop for the Cup Series is Music City, in NASCAR’s highly-anticipated return to Nashville. The Ally 400 marks the Cup Series’ inaugural race at Nashville Superspeedway, a 1.333-mile concrete facility. Nashville also marks the return of NASCAR on NBC. Coverage begins Sunday, June 20 on NBCSN at 3:30 p.m. ET. Can Larson dominate again at Nashville to get the guitar, or will this inaugural race provide an upset winner?