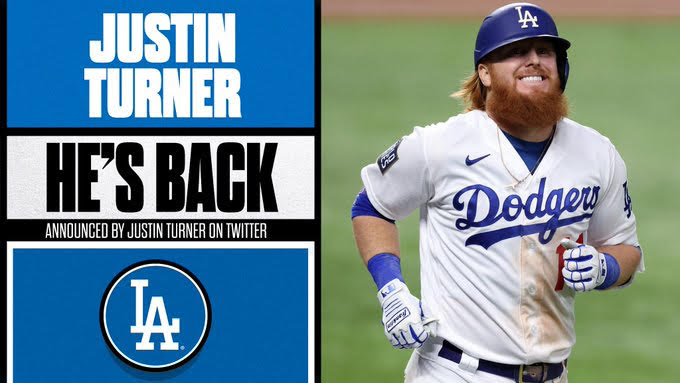 The Los Angeles Dodgers have re-signed Justin Turner to a two-year deal. The deal is worth a reported $34 million and also has an option for a third year. During his 2020 season, Turner slashed .307/.400/.460 with four homers and 23 RBIs.

Turner has played a massive role with the Dodgers since joining the team back in 2014. Since joining the defending champs, Turner has a .302 average with 116 homers and 406 RBIs. He has also played a big role in their postseason success. Turner is currently the Dodgers all-time leader in postseason hits (79), homers (12), runs (40), and RBIs (41).

Coming to Los Angeles was a turning point in Turner’s career. He quickly began to establish himself as one of the best offensive third basemen in baseball. Turner has also earned an All-Star nod, two top-10 MVP finishes, and one of Dave Robert’s most reliable bats in the lineup.

The Padres have made a lot of noise this offseason. They have shown they can compete with the Dodgers last season and will look to close that gap even more in 2021. The Dodgers have now kept Turner, bolstered their rotation with Trevor Bauer, and have added some bullpen help with Corey Knebel and Tommy Kahnle, and will also get David Price back; who opted out of the 2020 season. The Dodgers are the team to beat yet again as they will look to be the first team to repeat since the Yankees won three-in-a-row from 1998-2000.