2021 Kicks Off with a Bang in the Busch Clash 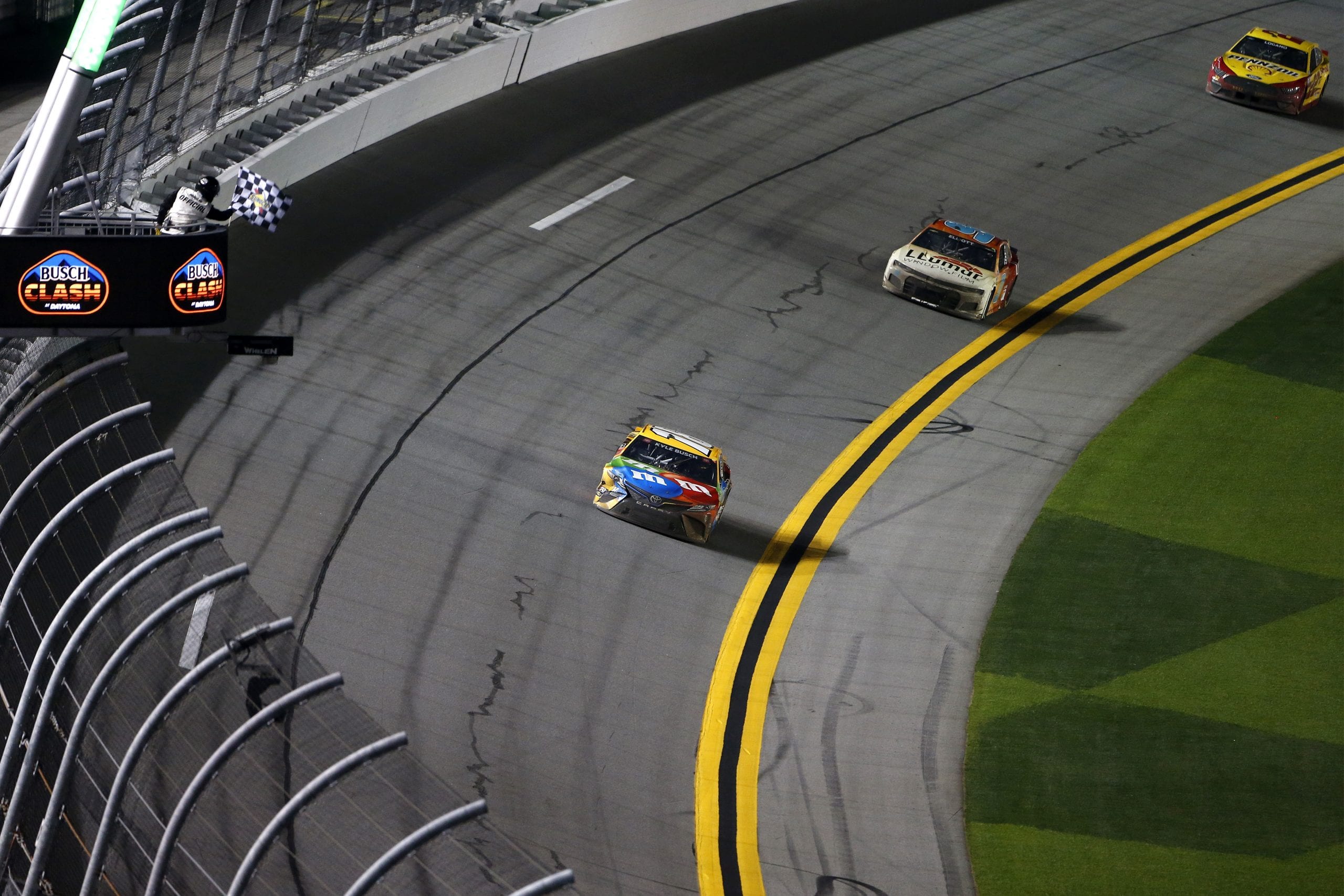 2021 has begun in a huge way for the NASCAR Cup Series. 21 of the sport’s best drivers made up the Busch Clash exhibition race Tuesday night. For the first time in this event’s 43-year history though, it was raced on the Daytona Road Course. This provided a very entertaining race, as the last lap saw Ryan Blaney being pursued by Chase Elliott. The two best friends would make contact though in the final corner, giving the victory to Kyle Busch.

Although Ryan Blaney drew the pole for the Busch Clash, it would be third-place starter Denny Hamlin leading the opening lap. Hamlin passed Blaney with ease in turns five and six, taking the lead back up onto the oval. Merely five laps into the 35-lap event, Hamlin’s No. 11 Toyota led by over a second. Blaney would slowly begin to reel Hamlin in, but his progress would be impeded by a debris caution on lap eight.

Despite restarting as the leader, Ryan Blaney’s time out front would be short-lived. The 12 overcooked entry into turn one, running wide and ceding the top spot to Tyler Reddick. The 8 car would lead a lap before getting passed by Brad Keselowski. Blaney’s costly mistake buried him in the field, but he still had a fast Mustang. This would prove to be a preview of just how treacherous restarts on this course would be.

Once Keselowski took over, he would have to hold off hard charges from both Hamlin and Martin Truex, Jr. The top three were under a blanket, racing hard through both the infield and the oval. The 11 would once again take the lead through turn six, with his teammate the 19 right on his tail.

Just prior to the lap 15 competition caution however, Truex would squeak by Hamlin to lead at the pause. The 19 would however make a costly mistake under this caution. Truex failed to go through the frontstretch chicane, incurring a penalty. As a result, the 19 would have to restart the Clash at the rear of the field. On alternate tire strategies, the first two out of the pits would be Kurt Busch and Austin Dillon.

Much like the previous restart, leader Kurt Busch overdrove turn one, giving the lead back to Hamlin. The 11 would begin to drive away on this run, as he led the next nine circuits. This stint would include a caution for the stalled 41 machine of Cole Custer.

.@ColeCuster is having all sorts of issues with his 4️⃣1️⃣ machine. #BuschClash

When racing resumed with just 11 laps left, Denny Hamlin would be ahead of teammate Kyle Busch. However, third-place Truex would quickly get by both of them to retake the lead. After coming from the back twice, the 19 appeared to be in a position to win big. Truex would fail to lead even a single lap here though. He would spin and back his car into the fence while exiting the backstretch chicane. This would trigger a caution, setting up a five-lap dash to the checkers.

Under this caution, nearly the entire field would pit for fresh tires. The lone exception would be Chase Elliott. The road course ace had been mired back in the pack for much of the night, running as high as fifth. This restart would surely be madness, as Elliott on old tires would try and hold off the entire field.

The restart would easily see Elliott clear the field and Blaney quickly took over second. With four laps remaining, the top two were separated by just one second. Blaney’s car definitely had speed, while Elliott was driving defensively. Coming to the white flag, Blaney took the lead with his fresh tires in turn five. At the white flag though, the 12 and 9 were just four tenths apart.

Coming into the rear chicane for the final time, Blaney stumbled, allowing Elliott to close in. By the time they hit the final chicane, the 9 was to the 12’s inside. Contact was made between the leaders, sending the 12 spinning and slamming into the wall. Unfortunately for him, Elliott slowed down enough for third-place Kyle Busch to catch him and beat him to the line. Elliott would finish second, while Blaney limped home in a dismal 13th-place.

CHECKERED FLAG: @KYLEBUSCH WINS THE #BUSCHCLASH AS @CHASEELLIOTT AND @BLANEY COLLIDE COMING TO THE FINISH! pic.twitter.com/0LgA8oCeyi

In shades of the inaugural Cup Series race on the Charlotte Roval from 2018, a seemingly non-factor and distant third-place driver was in the right place at the right time. While best friends Elliott and Blaney tangled, Busch simply cruised on by to his second Busch Clash win.

Neither of the two contenders minced words after the checkers. Elliott was “Close enough to drive it in there. I feel like I’d be mad at myself for not at least trying. Obviously I don’t mean to wreck anybody, especially not him. Some guys I wouldn’t mind, but he’s not one of them. Hopefully he’s not too mad at me, I feel like you got to go for it here.”

In Blaney’s words, “It just didn’t work out for either of us. We were just racing hard, I had a little bit fresher tires, I had to use up a lot to get to him and then just had to protect. I drove into the last corner really deep to make sure I didn’t get divebombed like that. We just came together there, what are you going to do?”

Almost lost in the craziness of the finish was the fact that Kyle Busch did win the Busch Clash. This is his second win in this event, coming nine years after his thrilling 2012 win. This also marks the record 10th win in the Clash for Joe Gibbs Racing, as they won it last year as well with Erik Jones. While Busch winning is not the highlight reel moment, what was going through his head in the final moments of the race?

Frantic Finish From the Eyes of KB18

“I kind of felt like there was an interesting opportunity there that was presenting itself,” Busch said. “I was kind of catching those guys and running them down for a couple laps there towards the end. They were pushing each other a little bit, kind of messing each other up more so than being able to run clean laps.

I was gaining, but I wasn’t going to get there. Obviously they got together there in that final corner. I wasn’t sure if Chase was going to push the issue and push back on Blaney and knock him through the turn and make him miss the exit or what was going to happen. The both of them had to make the turtles, if you will. They just got together and started crashing.

When that started happening, I was hoping they were going to wreck long enough that I could get up in there and get by them, we could win the thing. It’s never over till it’s over at these types of places, especially when you have those last-corner, last-ditch-effort chicanes like here and the Roval.”

While this win has no bearings on the rest of 2021 for Kyle Busch or the 18, it does mark the first win for this reorganized team. In their first competitive outing together, Kyle Busch takes new crew chief Ben Beshore to victory lane. Busch, Beshore, and the rest of the 18 team will try to continue this momentum into their first Daytona 500 as well on Sunday.

What’s Next in Daytona Speedweek

Up next on the docket for Daytona Speedweek 2021 edition is Daytona 500 pole qualifying. All 44 car’s time trial attempts can be watched live on Fox Sports 1 on Wednesday night at 7 p.m. ET. Daytona 500 week will conclude Sunday with the 63rd running of The Great American Race, from which TSJSports will provide exclusive coverage. The NASCAR offseason is finally over, as the new season definitely started with a wild finish.