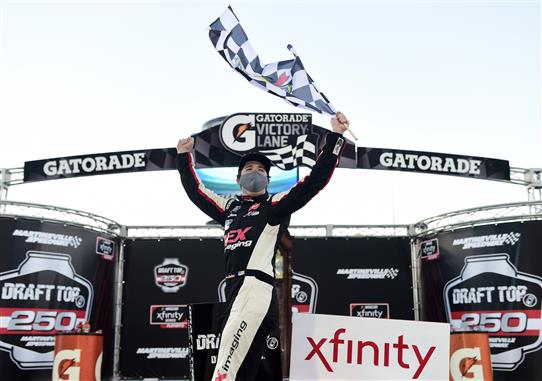 Harrison Burton held off Justin Allgaier on a late restart to win the Draft Top 250 at Martinsville Speedway. Burton took control of the race with 53 laps to go when AJ Allmendinger had to pit with a flat left rear. The win is Burton’s fourth of the season and second consecutive after winning Texas last week. Burton is now the youngest Xfinity Series winner in Martinsville history, breaking the record set by his dad, Jeff, 30 years ago.

Noah Gragson came into this week’s race 24 points below the cutline. A win was his best chance to get into the Championship 4, but there was still a path for him to get in on points. Gragson, who started second, stayed in the position for the first 43 laps.

It was a lap 44 restart that saw Gragson take the lead for the first time, passing Austin Cindric on the outside. Harrison Burton challenged Gragson in the final 10 laps of the Stage, but Gragson was able to hold him off. It was his ninth Stage win of the season.

JJ Yeley and Ryan Sieg stayed out after pitting just before the end of Stage 1 to inherit the lead. Burton wasted no time, taking the lead from Yeley right away.

Moments later, a three-crash involving Donald Theetge, BJ McLeod, and Stefan Parsons brought out the fifth caution on lap 70. Theetge’s car went through the grass and dirt entering turn three, dumping dirt on the track. As a result, all of that dirt forced a red flag for heavy cleanup.

Burton and Gragson swapped the lead on the restart with Burton ultimately coming out on top. It was short-lived though, as Ross Chastain worked his way to the lead with just 28 to go in Stage 2. Like Gragson, Chastain came into the race below the cutline so points were at a  premium for the 10.

Late Caution Shakes Up the Strategy

Matt Mills’ car blew up and caught on fire to bring out the caution with 15 laps remaining in the Stage. Mills was thankfully okay after the scary incident. Burton and AJ Allmendinger were the only leaders to pit under the caution. There were about 10 others who would pit while running outside the top 10. Chastain would go on to win the Stage over Gragson. The only problem for the top two was that the two drivers they were chasing in points, Justin Haley and Justin Allgaier, finished third and fourth respectively.

Allmendinger inherited the lead with the leaders coming to pit road. Chastain had to restart in 14th. He struggled to get through the field, while Allgaier and Gragson made up the most ground.

Bayley Currey brought out the caution after hitting the wall hard coming off turn two. With 74 laps to go, everyone came down pit road again, with Burton coming out as the leader. As a result. these pit stops would put everyone on the same tire strategy.

Allmendinger battled with Burton for a few laps before taking the lead on the outside. Just a few laps later, Burton went right back to the lead and Allmendinger was off the pace. The tire went flat after contact with Burton when the two were battling for the lead. The issue forced Allmendinger to pit and ended any chance of a win.

Devastating for Dinger.@AJDinger loses a left rear tire and comes to pit road after losing the lead. pic.twitter.com/RB2lLamM33

Myatt Snider brought out the 10th and final caution with 37 laps to go. This gave Allgaier, Gragson, and Chastain one last chance to get to the front and lock themselves into the Championship 4. After a brief battle with Allgaier, Burton pulled away to clinch his second consecutive win of the season.

The Championship 4 is set for Phoenix. Austin Cindric, Justin Allgaier, and Justin Haley will all join Chase Briscoe. Haley made it by just five points over Kaulig Racing teammate Ross Chastain. Haley was actually the highest finisher of all drivers in the Phoenix race earlier this season. He finished fifth, just one spot ahead of Briscoe and three spots ahead of Cindric. Allgaier finished 13th, but he led 51 laps. He also has two career wins at Phoenix, including last year’s fall race.

The Championship 4 is set for the @NASCAR_Xfinity Series!

We'll see you Saturday at 5PM on NBCSN. pic.twitter.com/XywATDNAF7

How to Watch the Championship Race

The Championship 4 race will take place at Phoenix Raceway. The Desert Diamond Casino West Valley 200 will be live Saturday, November 7 at 5 p.m. ET on NBCSN. Chase Briscoe and Austin Cindric will look to cap off a dominant season with their first championship. Justin Allgaier and Justin Haley will look to play spoiler and also capture a championship of their own.