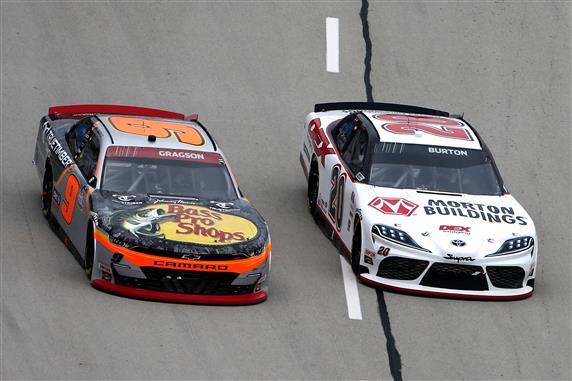 Harrison Burton made a last-lap pass on Noah Gragson to win the O’Reilly Auto Parts 300 at Texas Motor Speedway. It looked like Gragson was home free, as he led by a half-second coming to the white flag. But Burton would have something to say about it. Burton had to recover from a spin on lap 108, which he did with the help of some strategy. The win is Burton’s third of the 2020 season. Texas also marks Burton’s first win since Homestead back in June, and first since being eliminated from the Playoffs.

Chase Briscoe started on the pole and dominated the first 30 laps of the race. Brandon Jones began to track down Briscoe though, and the two battled for a few laps. With 11 to go in Stage 1 though, Briscoe’s car went way up the track in turn four. He would immediately come to pit road. The culprit was believed to be a broken shock. He eventually returned to finish in 24th place, 16 laps down.

A caution late in Stage 1 gave drivers a decision. Pit now and lose Stage points, or stay out and start farther back for the next Stage. Most of the non-Playoff drivers, along with Noah Gragson, decided to pit before the end of the Stage. Brandon Jones held off the field on a one-lap shootout to win Stage 1. Justin Allgaier got in the back of Ross Chastain coming off turn four to finish second. Chastain would fall from second to fifth.

Harrison Burton inherited the lead after the leaders pitted. He would quickly lose the lead to Noah Gragson but he would stay in the second for the majority of the run. Burton eventually tracked down Gragson and made the move past him with nine to go. Gragson was slowed up just a bit by the lapped car of Brett Moffitt. Burton would go on to win the Stage over Justin Allgaier, who was the highest running car of those who pitted after Stage 1. Amazingly, this marked the first career Stage win for the second-generation driver.

Playoff driver Ryan Sieg saw his championship hopes take a huge hit early in the Stage. Sieg had to take the car to the garage with a mechanical issue. He would finish 64 laps down in 28th place. He now enters Martinsville in a must-win situation.

It took Justin Allgaier just a few laps to take the lead away from Harrison Burton. Burton’s car became extremely loose off the corners and actually spun coming off turn four. The car skid through the grass but there was no damage. Burton gathered his car together and continued forward after his trip through the grass while running fourth.

Spinner off of Turn 4!@HBurtonRacing keeps it rolling, but will have a lot of ground to make up to get back in contention. pic.twitter.com/ceuuk6NoSW

About 30 laps later, Riley Herbst was racing with Jeb Burton when the 18 got loose off turn two and spun head on into the backstretch wall. The damage ended Herbst’s day.

Harrison Burton, along with Jeb Burton and Michael Annett, put on two tires to get to the front. It would be an all-Burton front row as the cousins tried to hold on with older tires. Allgaier had a big slide on the restart, allowing Justin Haley and Ross Chastain to get by. Both drivers had four fresh tires, as Chastain quickly got the lead from Jeb Burton. Burton’s tire blew about 15 laps after the pass to bring out yet another caution. All the cars decided to pit but not everyone had a set of fresh tires. Because of this, Haley and Annett went with fuel only to gain position.

The ninth caution of the day set up a restart with 25 to go. Allgaier started on the inside of the front row with Chastain to his outside. Allgaier’s car got loose and went up the track. This caused Chastain to check up and the two lost multiple spots. On the backstretch, it appeared Chastain turned down into Allgaier, causing the two to make contact and crash. As they were going down the track, they also collected Brandon Jones. The crash ended the day for Jones and Allgaier, with the drivers finishing 25th and 26th, respectively.

Harrison Burton Shocks Everyone with a Late Surge

Austin Cindric would subsequently be the beneficiary of the crash, as he would be the leader. Noah Gragson challenged him on the restart and forced Cindric into a mistake. Gragson would take the lead after Cindric slid out of the groove coming off turn four with 14 laps to go. It appeared Gragson would pick up a much-needed win and lock himself into the Championship 4, but Harrison Burton had other plans. He got around Anthony Alfredo for second with three laps to go, and immediately made up a ton of ground. He got within a car length of Gragson going into turns three and four. That’s when Gragson’s car slid up the track and Burton went right on by for the win.

It would be an unprecedented spin and win for Harrison Burton at Texas. Burton upset the Playoff picture by earning the third win of his young Xfinity Series career, and also made some history. Harrison and his father, Jeff Burton, are now the only father-son duo to win at Texas Motor Speedway. Burton the elder won the inaugural Cup race at No Limits, Texas in 1997, and also in 2007. Jeff was able to witness his son’s win as part of the NBC broadcast team. Harrison’s cousin, Jeb Burton, also won his first Truck Series race at TMS in 2013. There is certainly something special about the Burton family and Texas Motor Speedway.

The loss was even more costly for Gragson when you look at the Playoff standings. He went from a guaranteed spot in the Championship 4, to 24 points below the cutline with just one race left in the Round of 8. Austin Cindric’s fourth-place put him second in the standings, but only 14 points above the cutline. Despite the late crash, Justin Allgaier sits third in points, just eight points above the cutline. Lastly, the fourth driver entering Martinsville above the cut line is Justin Haley. The 11 sits only four markers ahead of Brandon Jones.

For the first time since 2006, the @NASCAR_Xfinity Series heads to @MartinsvilleSwy.

The Xfinity Series makes their long-awaited return to Martinsville Speedway. The final race of the Round of 8 will be the first Xfinity Series race at Martinsville since 2006. The Draft Top 250 will be live next Saturday, October 31 at 3:30 p.m. ET on NBC. The unknown of Martinsville could create some fireworks. Many Playoff drivers needing to win their way into Phoenix should also create quite the show. Don’t miss a lap of short track action next Saturday.