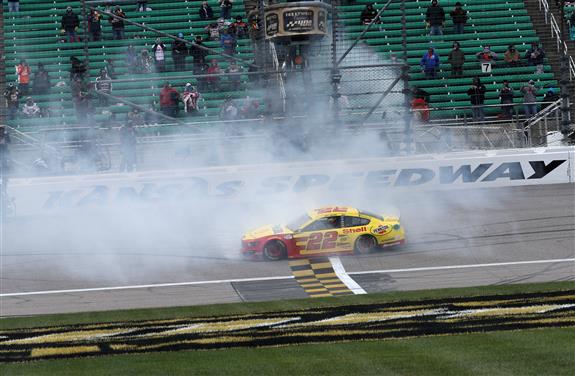 For the first time since Phoenix in March, Joey Logano and the 22 Penske team pull into victory lane. After beating Kevin Harvick off pit road late at Kansas, the 22 was able to block every charge by the 4. For Logano, this marks his third win of 2020. This victory could not come at a better time though, as it locks him into the Championship 4 battle at Phoenix.

Hometown Hero Gets his Moment

Prior to the start of the race, Kansas Speedway chose to honor their hometown driver. Emporia, Kan. native Clint Bowyer got to lead the field during pace laps. This came before Bowyer’s final start at Kansas, a track he’s desperately wanted to win at. Bowyer is the second driver to have this honor in 2020, as Jimmie Johnson paced the field at Auto Club Speedway in March.

This one's for you, Clint!

In his final NASCAR Cup Series start at his home track, @ClintBowyer leads the field during the pace laps at @kansasspeedway. pic.twitter.com/R6PHmaPORX

When the green flag fell at Kansas, it was the 9 of Chase Elliott who had early speed. From the pole, Elliott led the opening 25-lap run to the competition caution. After last week’s Roval win, the 9 team hoped momentum would carry them to two-straight victories.

On the first restart however, William Byron had the lead over Elliott thanks to a two-tire pit call. The 24 was not out front for a single lap under green however, as Kevin Harvick pushed Elliott by and then took position himself. While running second, Elliott began to suffer radio issues, unable to hear his crew chief or spotter. These issues would persist for the remainder of the race.

Late in Stage 1 though, Elliott’s 9 car came to life. He began to quickly match Harvick’s pace, and with 16 laps to go retook the lead. Elliott would win Stage 1, while Harvick would drop like a rock back to seventh. As a past Kansas winner, Chase Elliott was the class of the field early on with position. However, the fastest at the end of the Stage was Brad Keselowski, finishing in a close second.

Hamlin Ahead in Stage 2

On pit road, Denny Hamlin narrowly edged Elliott at the timing line. The 11 would restart as the leader and took off. After a spirited side-by-side battle with the 9 for a few laps, the 11 finally cleared and set sail. The 11’s only challenger this run for the lead would be a non-Playoff driver, the 12 of Ryan Blaney. Blaney kept Hamlin on his toes, only staying a few tenths off of the 11. However, Hamlin retained his track position until a lap 124 pit stop under green.

Matt Kenseth hitting the wall would bring out a caution in the midst of this green flag pit stop cycle. However, Hamlin and Blaney still cycled out to the front row for the restart. Even though it was a hotly contested 11-lap run to the Stage end, it would be the 11 taking Stage 2. This dash to the green and white checkers would also see Harvick go from 12th to second. All eight Playoff drivers would also finish Stage 2 in the top nine spots.

Coming into Kansas as the two-time defending victor, Hamlin was hoping to make history as the track’s first three-peat winner. Stage 2 would mark the 11 team’s 10th Stage win of 2020.

Kyle Busch would stay out after Stage 2 to restart as the leader, with Joey Logano lining up alongside him. However, Harvick would get by the 22 to take the lead just two laps later. Inside of 100 laps to go, the 4 was pulling away from the pack.

While trying to make up lost ground on lap 180, Denny Hamlin would find the outside wall. The 11 immediately had a right rear tire go down, and was forced to pit road. This incident would put Hamlin behind the eight-ball for the rest of the day, as the 11 came home in 15th. After seeming like a lock for the finale, Hamlin leaves Kansas only 20 points above the cut line.

HAMLIN IN THE WALL! @dennyhamlin with significant damage to his No. 11 machine. pic.twitter.com/ADYToHgME2

Not long after Hamlin returned to the race a lap down, another driver reported an issue. The power was quickly fading on the 1 car of Kurt Busch. The Las Vegas winner fell back, freefalling through the field until his motor finally gave way on lap 199. With the early retirement, Kurt Busch would leave Kansas in 38th, and last in the Playoff standings. At -73 points, only a win over the next two weeks will see Busch advance to the Championship 4.

On the restart with 62 laps left, Harvick took off over Kyle Busch. It was not long until all three Penske cars eventually got into the top five, as Logano, Keselowski and Blaney ran 2-3-4 behind the 4. Harvick appeared to have the race in the bag, until a caution came out with 46 laps to go.

The 8 of Tyler Redick pounded the fence in turns three and four, triggering a yellow flag. The leaders came in for their final service, and the eventual race-winning pass was made on pit road. With 45 laps to go, Logano barely beat Harvick out of the pits, and would restart in prime position.

The final 42 lap charge to the checkers would be a mistake-free run for Logano. Even though Harvick was mere feet off of his rear bumper for much of these closing laps, the 4 could not make the pass. As the race wound down, Logano continued to set perfect lap after lap. Harvick was never able to mount enough of a charge, allowing Logano to take the Kansas win. At the checkers, Logano led Harvick by only three tenths.

Much like his championship season in 2018, Joey Logano and the 22 team have come to life at the perfect time. This clutch Kansas win locks up Logano’s spot in the Championship 4, his fourth time making the finale. As the most recent winner at Phoenix Raceway, the 22 cannot be counted out of this title hunt.

The top five was loaded with Playoff contenders, as following Logano across the stripe were Harvick, Alex Bowman, Brad Keselowski and then Kyle Busch. Harvick knew that controlling the final restart meant a chance to win, and regretted not getting off pit road first. At separate points in the closing laps, both Bowman and Keselowski were in third place and closing in fast on the leaders. Kyle Busch’s top five is also his 13th on the year.

The rest of the top 10 would be Chase Elliott, Ryan Blaney, William Byron, contender Martin Truex, Jr., and rookie Christopher Bell. Only Kurt Busch and Denny Hamlin would not score a top 10 among the eight Playoff drivers.

“I am worn out,” Logano exclaimed after the race. “I spent more time in the mirror than I did in the windshield there. Pit stops got us positions and got us the lead. The 4 was fast, real fast, especially down the straightaways. I thought if I could hold him off the first 15 laps that I would have a chance. Dirty air was the best for us. As we caught lapped traffic I was able to gap ourselves as he got more dirty air and I was able to draft somebody because I was a little slow down the straightaway. Man, I am exhausted after that. We are going to Phoenix and racing for a championship again. Heck yeah!

You come into this race knowing that if you can win this thing you have an amazing advantage. The same thing happened in 2018 when we raced for the win at Martinsville knowing that we have two races to battle for nothing but the championship. I can’t believe it. Especially the way the beginning of the race was going and running back there not scoring stage points. It was a good strategy by Paul and good pit stops and now this Shell Pennzoil Mustang is going to race for a championship at Phoenix.”

With his third Playoff win at Kansas Speedway, Logano hopes to now earn his third career win at Phoenix Raceway in two weeks’ time. Logano had failed to win since racing returned from the pandemic in May, now can anyone stop this 22 team’s march to title number two?

Up next in the NASCAR Playoffs is Texas, for the Autotrader EchoPark Automotive 500. Coverage will be next Sunday, October 25 at 3:30 p.m. ET on NBCSN, PRN, and SiriusXM NASCAR Radio Channel 90. Kevin Harvick comes into this Texas race having won the final three fall races in the Lone Star State. Can anyone stand between the 4 team and an unprecedented 10th win in 2020?