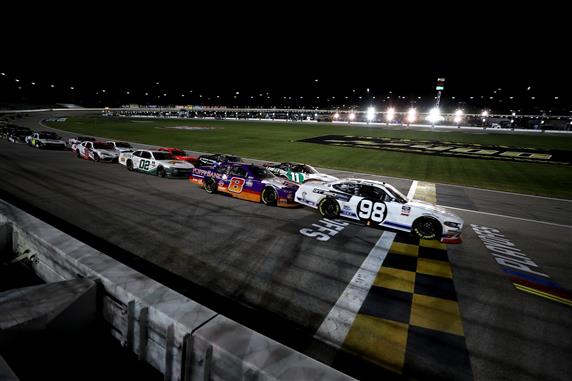 Chase Briscoe Locks Himself into the Championship 4 with Kansas Win

Chase Briscoe continued his march towards an Xfinity Series championship with a dominant win in the Kansas Lottery 300 at Kansas Speedway. Nobody could match Briscoe’s speed all night, as he led a race-high 159 laps. His nine wins this season are the most ever in a season for an Xfinity Series regular.

Noah Gragson started on the pole and got out to an early lead. A spin by Matt Mills brought out the caution of lap 11. For the next restart, Gragson would start in the outside lane of the front row. Ross Chastain, who started right behind him, moved to the middle to make it three-wide going into turn one. Austin Cindric ran right behind Chastain in the turn but tried to turn under him exiting turn two. Gragson would make contact with Cindric’s left rear, causing the two to make contact multiple times down the backstretch.

Austin Cindric and Noah Gragson get together! @KansasSpeedway is not kind to #NASCARPlayoffs drivers. TV: NBCSN pic.twitter.com/kGs0btFVoi

Gragson was unable to repair his damage while under the Damaged Vehicle Policy, forcing him to retire from the race with a 36th-place finish. Cindric was able to meet the minimum speed however, allowing him to take his car behind the wall to further repair the damage. Cindric did return to the race, but he was a non-factor. He finished 27 laps down in 28th place.

Chase Briscoe took the lead from Ross Chastain just after the restart and went on to win Stage 1 over Brandon Jones. Briscoe appeared untouchable, but the two-time defending Kansas winner was in second.

A multi-car crash would soon halt the action just seven laps into Stage 2. Jeffrey Earnhardt spun out in turn three after being rammed in the rear by Joe Graf, Jr. The final 35 laps of Stage 2 ran green, with Briscoe running away from the field. Briscoe has now won seven of the last eight Stages. He also has swept the Stages in three of the last four races.

Briscoe kept the lead after pit stops at the end of Stage 2. He would go on to lead the race until he made his green-flag pit stop with 54 laps to go. In an attempt to catch a caution, Ryan Sieg stayed out longer than the leaders. Sieg would get that caution with 45 laps to go when Josh Reaume spun out. Sieg, along with Justin Haley and Brett Moffitt, came to pit road for fresh tires. With only 13 cars on the lead lap, it meant Sieg had a better chance to get to the front with the new tires.

The race ran green for just five laps before a Harrison Burton spin brought out the caution. Burton was trying to avoid Ross Chastain and Anthony Alfredo, who made contact exiting turn two. Burton spun all the way down the track but barely kept it off the wall.

With fresh tires coming, all the leaders decided to come down pit road to put on their final set of the day. However, Sieg, Haley, Moffitt and three others chose to stay out.

On the ensuing restart, Justin Allgaier got underneath Anthony Alfredo, who was already under Brandon Brown going into turn one. Allgaier entered the turn on the apron and tried to come up. He hit the left rear of Alfredo’s car, sending him around towards the infield. It appeared Alfredo tried to turn right in an attempt to save his car, but it instead sent him head-on into the outside wall. The impact caused him to get on his side and flipped when the car slid down the banking. He would eventually come to a stop on his roof. Track workers rushed to Alfredo’s car and were able to safely flip it back over and Alfredo safely climbed out. The crash ended the night for Alfredo and also for Riley Herbst. Both Allgaier and Brandon Jones were able to continue though.

What a wild ride for @AnthonyAlfredo.

Take a look at what happened that led to the 21-year-old flipping at @KansasSpeedway. #NASCARPlayoffs pic.twitter.com/4rkn3wzmmf

Briscoe Takes the Lead in No Time

After a 12-minute red flag, Ryan Sieg held the lead with Chase Briscoe restarting in eighth place. It took Briscoe only two laps to retake the lead from Sieg. A Myatt Snider spin would bring the caution back out with nine laps to go. Sieg had one more set of fresh tires on pit road and decided to pit from second to take advantage of those tires. Briscoe held the lead with ease on the final restart to cap on a dominant night for the championship favorite. Daniel Hemric finished runner up, while Sieg got back to third on the fresh tires.

Briscoe’s win locks him into the Championship 4 race at Phoenix Raceway. Justin Allgaier and Brandon Jones were also the biggest beneficiaries of their competitor’s problems. The two sit second and third in the standings. Despite a strong third-place finish, Ryan Sieg remains 17 points below the cutline.

The Round of 8 continues on at Texas Motor Speedway. The O’Reilly Auto Parts 300 will be live next Saturday, October 24 at 4:30 p.m. ET. Coverage will be on NBCSN, PRN, and SiriusXM NASCAR Radio Channel 90. Will guys like Ryan Sieg and Noah Gragson be able to fight their way into the championship race, or will the top drivers strengthen their hold on a Championship 4 spot?