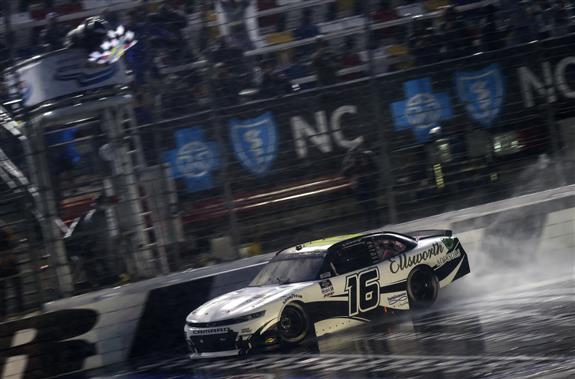 For only the eighth time in Xfinity Series history, a race was competed in the rain. Road racing ace AJ Allmendinger took advantage of a spin by race leader Chase Briscoe with two laps to go to win the Drive for the Cure 250 at the Charlotte Roval. The race was marred by rain, causing havoc all day for the drivers. For Allmendinger, he now has back-to-back wins in the Xfinity Series on the Roval.

The race started out dry with Noah Gragson leading the first three laps under green. Brett Moffitt broke a trackbar and cut down a tire to bring out the early caution. While under caution, the rain began and the majority of the teams took the opportunity to put on rain tires.

The race resumed on lap seven in the rain. The first few laps were tame but as the rain continued to come down harder, the accidents came in bunches.

After all the chaos, Justin Haley and Harrison Burton assumed the lead with two to go in Stage 1. Gragson would then make a daring three-wide move to take the lead. Burton blew through the front stretch chicane and had to come to a complete stop. The penalty was costly, as Burton entered the race on the Playoff cutline and desperately needed the Stage points. Kaz Grala came from nowhere to pass Gragson on the final lap to win Stage 1.

Kaz Grala and Noah Gragson stayed out along with a few others who pitted before the end of Stage 1. Gragson got the lead back when Grala missed the chicane. Riley Herbst began to track down Gragson and eventually got to his back bumper. Instead of turning under Gragson, Herbst got into the back of him, sending him into the wall in turn five. Gragson was not happy with Herbst after the incident.

This is not the first time the two drivers have had a run in this year. Gragson spun Herbst out at Texas earlier this season. That incident took place early in the race and ended Herbst’s day.

During the caution for Gragson’s crash, NASCAR made the decision to red flag the race due to standing water and puddling. The race was red-flagged for 38 minutes before going back green.

It took all of five corners before the next crash would occur. Leaders Riley Herbst and Justin Allgaier spun into turn five. Michael Annett, Justin Haley, and Preston Pardus weren’t far behind as they piled into the wreck. Haley’s car suffered extensive front end damage, ending his day.

A big crash on the restart at @CLTMotorSpdwy's ROVAL!

Just after the restart, Harrison Burton’s car stalled on the straightway in the infield, bringing out another caution. It was believed to be a clutch issue for Burton. The issue would end his race and Playoff hopes.

All the crashes and problems set the stage for Chase Briscoe to make his way back to the front and win Stage 2.

Chase Briscoe and AJ Allmendinger ran top two for the majority of the final stage. It was a constant back=and-forth battle between them for much of the final 30 laps. Third place on the other hand was not where you wanted to be. Noah Gragson spun out while running third right at the start of the Stage. Both Alex Labbe and Myatt Snider also spun while running third about 10 laps apart.

Briscoe and Allmendinger traded the lead multiple times in Stage 3. It appeared Briscoe’s pass on Allmendinger with 12 laps to go would be for the win. A caution with eight laps to go would change everything though. The 99 of CJ McLaughlin spun coming off turn one and didn’t get going in time. This forced NASCAR to throw the caution, as the leaders nearly got into the 99.

Allmendinger’s car was much better on the short runs as he passed Briscoe for the lead. That lead was short-lived though, as Briscoe got back around Allmendinger with four to go. Brandon Brown went off track a lap later to bring out the 10th caution of the day. Many drivers noted that they couldn’t see with the lack of lights in the infield but NASCAR went ahead with the final two laps.

Coming off turn one, Briscoe pushed his car a little too hard and spun out. This cleared the way for Allmendinger to take the lead and ultimately the win over Noah Gragson and Daniel Hemric. This is Allmendinger’s second win of the season and second consecutive at the Charlotte Roval.

While any win is cause for a big celebration at Kaulig Racing, Allmendinger’s Roval triumph has added significance. Kaulig and Allmendinger have now won the last two Xfinity races on the Charlotte Roval. This marks win two of the year for Allmendinger, in addition to earlier this season in Atlanta.

Kaulig has also won the last two races this season now, as Justin Haley’s Talladega win preceded AJ’s victory. Lastly, Ross Chastain was able to race his way into the Round of 8, putting two Kaulig cars into the Playoff semifinals. For Matt Kaulig, Chris Rice and their whole operation, Saturday was a momentous occasion.

Playoff Picture for Round of 8

Harrison Burton, Riley Herbst, Michael Annett, and Brandon Brown were all eliminated from the Playoffs. Chase Briscoe and Austin Cindric begin the Round of 8 atop the point standings with 60 and 50 Playoff points, respectively. Who can challenge them for the title and also make up the final two spots in the Championship 4?

In three weeks time, four of them will advance to the @NASCAR_Xfinity Series championship. #NASCARPlayoffs pic.twitter.com/dLXIzDv8s6

The Round of 8 will begin next weekend at Kansas Speedway. The Kansas Lottery 300 will take place Saturday, October 17. Coverage will be at 7:00 pm ET on NBCSN, MRN, and SiriusXM NASCAR Radio Channel 90. Kansas has seen several drivers earn first career wins recently. Can an upset winner spoil the Playoffs?