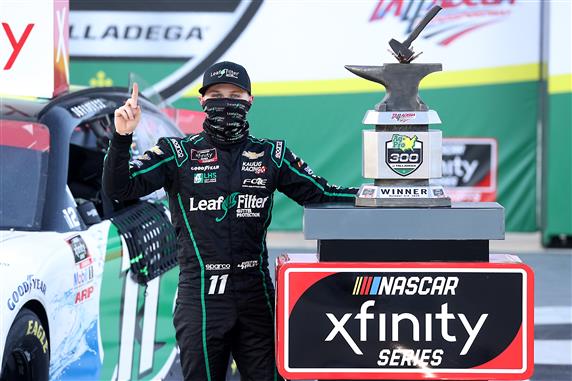 Justin Haley took advantage of contact between Chase Briscoe and Noah Gragson to take the lead with two laps to go to win the Ag-Pro 300 at Talladega Superspeedway. The win is Haley’s third of the season and career. All three of Haley’s wins this year have come on Superspeedways. Haley joins elite company with three Xfinity superspeedway wins in one season. This win also locks him into the Round of 8.

Chase Briscoe and Austin Cindric hooked up right at the start and ran nose to tail the whole Stage. Briscoe briefly lost the lead on lap two but regained it just a lap later. Briscoe and Cindric controlled the Stage from there as they would finish top two in Stage 1.

Stage 2 started much like Stage 1. Briscoe and Cindric led the top line and no one could get by them.

Austin Hill spun Riley Herbst into the inside wall with 12 laps to go. The car hit the wall hard on the driver’s side. Herbst was okay after the hard hit, but the crash ended his day.

On the ensuing restart the top lane stacked up, causing Harrison Burton to run into the back of Ross Chastain. Chastain’s car turned right into the outside wall and slid back down the track. Colby Howard ran right into the right front of Chastain.

The race was red-flagged so the stage could end under green. Briscoe kept the lead on a one-lap shootout to sweep the Stages. Prior to last week, Briscoe had not swept Stages in any race. Now, he has done just that in the last two races.

Championship Contenders Take a Hit Late in the Race

AJ Allmendinger, Austin Hill and also Brett Moffitt stayed out to take track position to begin the final Stage. Briscoe and Cindric both got caught on the bottom lane and quickly dropped to the back of the pack.

The field ran single file around the top with Allmendinger and Noah Gragson in the lead until green flag pit stops begin. As many of the cars went to pit, Austin Hill and Cindric were both rear-ended, sending both cars into the inside wall.

Brandon Brown cycled out to be the leader after the pit stops but he was quickly overtaken by Briscoe. A debris caution just a few laps later jammed everything back up.

Justin Allgaier had been complaining about his oil temperature much of the final Stage. His car was leaking oil at the end of Stage 2. The engine finally let go a few laps after they went green in the final run.

Haley Makes a Race-Winning Move to the Bottom

Briscoe led the top line as a couple of cars tried to make the bottom work to no avail. Finally with about three to go, Justin Haley jumped out of the high line, in front of Michael Annett and Allmendinger. Contact with Noah Gragson sent Briscoe sideways but was able to save it and lead the bottom lane.

He eventually cleared Gragson and blocked the top lane, only to be knocked into the wall coming to the white flag. Briscoe would have to settle for a 20th place finish despite leading a race-high 73 laps. The incident paved the way for Haley to take the lead on the bottom. A big crash on the backstretch caused the race to end under caution. Among the drivers involved in the crash were Harrison Burton and Allmendinger.

Haley becomes only the third driver in Xfinity Series history to pull off three superspeedway wins in one season. As a result of the win, he joins the very elite company of Dale Earnhardt, Sr., and Dale Earnhardt, Jr.

The @Justin_Haley_ pass for the lead!

Here's how it all went down in the closing laps at @TalladegaSuperS. 👇 pic.twitter.com/bJNxAtJWKI

Justin Haley moves up to second in points as his win locks him into the Round of 8. Austin Cindric, Noah Gragson, and Brandon Jones all sit in a good spot, being over 30 clear of the cutline. A third-place finish for Ryan Sieg also gives him a 23-point cushion. Michael Annett and Harrison Burton each sit just outside the cut line.

Ready for the ROVAL.

Here's a look at the #XfinitySeries #NASCARPlayoffs standings as we head to the final race in the Round of 12. pic.twitter.com/XSC5zPw6rX

The final race of the Round of 12 is at the unpredictable Charlotte Roval. The Drive for the Cure 250 at the Charlotte Roval will take place Saturday, October 10. overage will be at 3:30 p.m. ET on NBC. The two championship favorites will look to continue their road course success but there will be 10 other Playoff drivers looking to add bonus points.