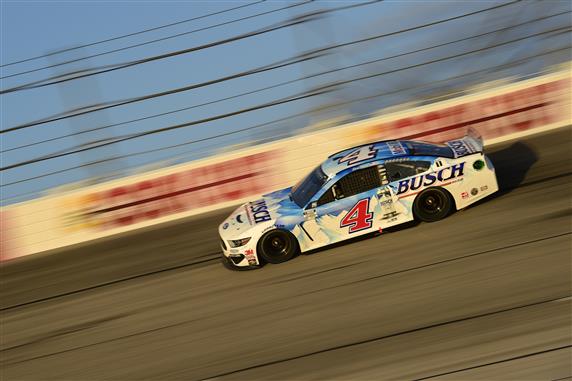 Leading into Playoff race one, Kevin Harvick said that the 4 team “Playoff race(s) every week, we’ll keep doing what (we’ve) been doing in order to continue that going forward.” Once the green flag fell at Darlington, the 4 team was battling near the front. After the two leaders took each other out late, Harvick inherited the lead and cruised to victory lane in the 71st annual Southern 500. Harvick definitely caught some lucky breaks however, as Chase Elliott and Martin Truex, Jr. were aggressively racing late. The regular season champion is the first winner in the Playoffs, and is thus onto the Round of 12.

Elliott on a Tear Early

After starting from the pole, Chase Elliott was the class of the field to kick off the Southern 500. The Napa 9, in a Jimmie Johnson 2009 throwback scheme, would lead for the opening 71 laps. Elliott held serve until a green flag pit stop cycle late in Stage 1. Not long after this cycle, a caution would fly for Brad Keselowski making wall contact. This brought everyone back down pit road, where Elliott lost the lead to Martin Truex, Jr. This exchange of track position would be enough for Truex to win Stage 1. This was only the 19’s third Stage win of the year. Coming up right behind Truex in Stage 1 would be Jimmie Johnson, who got around Elliott late. Stage 1 would only be halted twice by cautions, one being the competition yellow and another for debris.

Truex would show his muscle on the start for Stage 2, as he got around Denny Hamlin for the lead. The 19 would quickly amass a lead of over two seconds. A caution for the 43 of Bubba Wallace spinning occurred just after green flag pit stops on lap 181. Everyone came in for tires, with Truex holding serve once again. As the laps ticked off for Stage 2, Truex again built up a massive lead in excess of four seconds. Without much issue, Truex would go on to sweep the Stages. Despite only one regular season win, the 19 team showed championship pedigree by being the fastest on track early.

Although Hamlin once again restarted with the lead, Truex would reassert command thanks to a lightning-fast pit stop on lap 248. When the green flag fell again, the 2019 Championship 4 of Truex, Kyle Busch, Hamlin, and Harvick ran in the top four spots. As the Southern 500 hit 100 laps to go, Truex’s lead was over a second. Truex looked to be on his way to a dominant win, but Joe Gibbs Racing then went for a daring strategy call.

As many of the leaders came to pit road with around 80 laps to go, the Toyota trio of Truex-Busch-Hamlin stayed on track. They were trying to run the final Stage on only one pit stop, rather than two. As a result, they would need to stretch their first run and not pit until about 60 laps remained. On older tires, the Toyotas lost nearly two seconds per lap. After giving up major time, the 19 and 18 came in for their final service with 61 laps left.

Hamlin also tried to pit with his teammates, but made a costly mistake. Hamlin tried to duck down into the pits late in turn three, and got held up by Jimmie Johnson. As a result, the 11 missed pit entry, and had to make another lap at reduced pace. This exchange cost Hamlin dearly, as he would only recover to finish 13th.

After Hamlin’s blunder, Kevin Harvick inherited the lead. The 4 would remain out front until a debris caution with just under 50 laps to go. On pit road under this yellow, Harvick lost the lead to Elliott. On the restart, Truex would also get around the 4 for second.

Leaders Take Each Other Out

As the laps wound down, a 9 vs. 19 battle appeared to be brewing. Truex had the faster car, with Elliott playing defense. With 13 to go, Truex was there and tried a daring move. Going into turn one, he cut to the inside  of Elliott, and almost had the 9 cleared. When Truex slid up however, he clipped Elliott and sent them both into the wall. With heavy damage, Truex came to pit road immediately. After sweeping the Stages and leading a race-high 196 laps, Truex’s chance at the win were over. The 19 would only come back out to finish 22nd.

BOTH OF THE LEADERS HIT THE WALL HARD! pic.twitter.com/xJzIYz3SSP

The Seas Part for the 4

Who did this failed slide job give the lead to? Kevin Harvick. The 4, who was several seconds in the rear of Truex/Elliott, was gifted prime track position and a clean road ahead. Inheriting second place would be Austin Dillon, who tried valiantly to run the 4 down. It would not be enough however, as Harvick set sail for his second career Southern 500 win. This also marks Harvick’s eighth victory of 2020, tied for a career-high win total.

What was Harvick’s view of the Truex-Hamlin melee that gave him the win? “I didn’t see anything,” said Harvick. “Timmy came on the radio and told me that the leaders had just wrecked. At that particular point the whole game changes just because of the fact that obviously I knew we were running third. At that point it was managing what I had behind me and trying to make sure that I didn’t make any big mistakes to give up big chunks of time. As we went through the next couple laps, obviously I could see the 9 and 19 getting progressively closer to me as we were making laps, and the 19 pitted there, and when I passed the 9 I saw that he was all tore up. So it was definitely a strange cycle of laps there over those four or five laps.”

In a close second behind Harvick was Austin Dillon, scoring his second top five in the Southern 500. Dillon’s amazing finish was both a strategy play and a result of capitalizing on other’s mistakes. Many counted out the 3 team before these Playoffs, but with more runs like Darlington, Dillon could sneak his way into the Round of 12.

The remainder of the top five were Joey Logano, non-Playoff driver Erik Jones, and William Byron. Logano earns his eighth top-10 in the last 10 races, while Jones still has yet to finish worse than eighth at Darlington. For Byron, a top-five is an incredible run coming off of his Daytona win. The 24 now has three top fives in the last three races.

The rest of the top 10 from the Southern 500 were Alex Bowman, Kyle Busch, Kurt Busch, Aric Almirola, and Clint Bowyer. On the flip side. nearly half of the Playoff drivers would finish outside of the top-10. This list includes Brad Keselowski in 11th, Cole Custer in 12th, and Denny Hamlin in 13th. Keselowski’s 11th place finish is no small victory, as the 2 hit the wall early and battled back all night. Hamlin would have been in the mix late if not for missing pit road.

Other Playoff drivers with poor results are Chase Elliott in 20th, Matt DiBenedetto in 21st, and Truex in 22nd. Rounding out the contenders in 24th would be Ryan Blaney, who was assessed a major penalty before the race.

“(Tonight) was a battle,” Harvick said. “It wasn’t necessarily pretty. But everybody on our Busch beer Ford Mustang team did a great job tonight keeping us in the race. Rodney had great strategy. Our car was extremely loose all night, and we were able to manage to get it better but never really got it going as good as we’d like to. But they battled, and we kept ourselves in the right spot. The leaders got tangled up and we were in position to capitalize on that. Definitely weren’t the fastest car but definitely put ourselves in a position to capitalize on a moment.”

Harvick on Fans Being Back

Harvick also talked about how thrilling it was to celebrate a win in front of fans again. When Harvick won the first Darlington race in May, he exited the car to empty grandstands and eerie silence. “To get out of that race car and have all that emotion and finally have somebody to share it with and get a reaction that comes with your excitement from the fans, and to have that enthusiasm that goes hand in hand with the things that you say and the things that you do and the reactions that you get, it felt really good. That’s the first race that I’ve won this year that anybody has been here.

But I think back to the first race here, and for me that was really the moment that put it all into perspective of where we were and what we were doing and how drastic of a situation it was when you have all that enthusiasm to share with nobody and just dead silence. It felt really, really good to have some cheering fans in the grandstands and be able to experience that again.”

With the Southern 500 win, Harvick is onto the Round of 12. For the next two weeks, the 4 team is racing pressure-free as the 15 other contenders battle it out.

Race two of the 2020 NASCAR Cup Series Playoffs will be at Richmond Raceway. With the spring race being canceled due to COVID-19, Saturday night will be the first Richmond race of 2020. Coverage of the Federated Auto Parts 400 will be Saturday, September 12 at 7:30 pm EST on NBCSN, MRN and SiriusXM NASCAR Radio Channel 90. The short track is Denny Hamlin’s home turf, can he reassert himself in the title discussion?