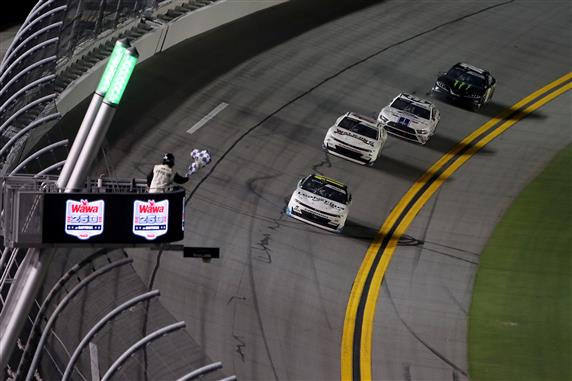 Justin Haley was fourth coming to the white flag of the Wawa 250 at Daytona International Speedway, but a little luck got him to the front at the checkered flag. Haley’s teammates, Ross Chastain and AJ Allmendinger, made contact, allowing Haley to get by. The win is Haley’s second of the season and also his career. His first win came on the other superspeedway, Talladega.

Chase Briscoe and Austin Cindric started first and third and easily got out front of the field. A pair of early cautions got other drivers on the outside of the Ford’s but no one could work their way around them.

On lap 23, the JR Motorsports cars began to make a run in the top lane, forcing the Ford’s to go to the top and slow their momentum. This left the bottom lane open for Kaulig Racing teammates Justin Haley and Ross Chastain, as they got to the lead. Haley kept the lead on a one-lap shootout to win Stage 1.

Pair of Big Wrecks Shake Things Up in Stage 2

AJ Allmendinger stayed out under the stage caution and then quickly hooked up with his teammates to take the lead. A few laps later, Brandon Jones came down on Chase Briscoe off turn four to trigger the first big one. Other drivers involved were Justin Allgaier, Noah Gragson, Daniel Hemric, Brett Moffitt, and Alex Labbe.

Multiple cars involved in this pileup coming out of Turn 4! pic.twitter.com/vdreVMYPCT

Immediately following the restart, Allgaier blew a tire in turn three and spun into the outside wall. He collected Labbe, Joey Gase, and a few others. The race was red-flagged for cleanup on lap 47.

The Kaulig cars pitted for four tires with eight to go in Stage 2, but this did not stop them from quickly getting back to the front. Allmendinger won the Stage with Chastain and Haley finishing second and third.

The Kaulig trio led a 10-car breakaway for the first 20 laps of the final stage. No one made any moves though, as everyone was content running single file. Subsequently, Chase Briscoe and Austin Cindric were the first to make a move with 18 to go as they got by Josh Williams to move up to fourth and fifth, respectively.

With 10 to go, Cindric was able to get by Haley and somewhat breakup the Kaulig trio at the front. As a result, Haley dropped back to sixth with the Ford duo in position to make a move.

Haley slowly made his way back up to fourth as they entered the final lap. AJ Allmendinger went a little high in turn three and Ross Chastain tried to fill a small hole on the bottom. The teammates made contact and went into the wall. Haley had just made it by Cindric to take over third. Cindric and Michael Annett were also involved in the crash. Gray Gaulding also made it through to score a career-best second-place finish.

While the Cup Series will be beginning their playoffs, the Xfinity Series will continue their final stretch of the regular season next week. Darlington Raceway will host the Sport Clips Haircuts VFW 200. Coverage will be Saturday, September 5 at 12:30 pm EST on NBC. Chase Briscoe won the spring race at Darlington in a thrilling finish over Kyle Busch. Another win could go a long way in the battle for the championship.