Brandon Jones Goes Back to Back at Kansas 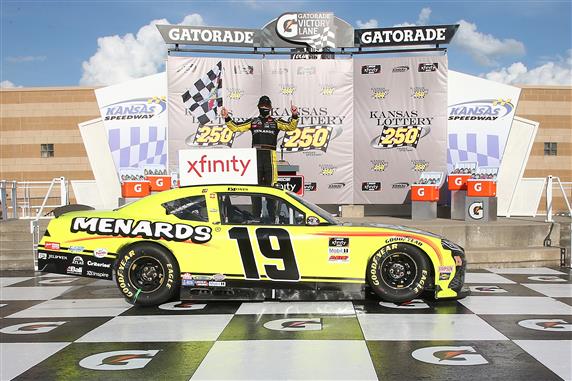 Brandon Jones Comes from Nowhere to Steal the Win at Kansas

The driver of the No. 19 Joe Gibbs Toyota had about a fifth to tenth place racecar all day and that’s exactly where he lined up on that final restart. Starting in seventh with two laps to go, Brandon Jones used a huge run to get up to third behind Ryan Sieg and Austin Cindric. He cleared Sieg off turn four and drove underneath Cindric to take the lead in turn one on the final lap. This is the second win of 2020 for Jones and third of his career.

The winner of the last three races, Austin Cindric looked poised to become the first driver since Sam Ard in 1983 to win four-straight Xfinity races as he dominated the first two stages. Cindric passed Jones on lap 11 and led for the remainder of Stage one and all of Stage two. It was no easy task though as Harrison Burton ran Cindric down in the closing laps of Stage two. Cindric did a good job of blocking Burton’s clean air and with the help of some lapped traffic, he was able to hang on for his seventh Stage win of the season. It was also the second time this season he swept the first two Stages of a race.

The majority of Stage three ran like Stage two. Cindric would get out to a big lead and Burton would steadily run him down. Cindric once again got a big lead after a cycle of green flag pit stops but wouldn’t actually take the lead until 20 to go when Sieg pitted. Burton eventually got to Cindric’s bumper and forced him to make a mistake, allowing Burton to make the pass.

A caution with four to go took away an easy win for the 19-year-old Joe Gibbs driver. That caution saw everyone pit with the exception of Sieg, who pitted 20 laps later than the leaders. It appeared Sieg was passed on the restart but a caution came immediately out for Jesse Little. The last scoring loop before that caution scored the 39 as the leader. The ensuing restart saw Brandon Jones zoom from seventh to first in just over a lap to score his second-straight win at Kansas.

Despite leading 132 of the 167 laps, Austin Cindric had to settle for second. It was still a great points day as the Team Penske driver picked up two Playoff points and now sits just 12 points behind Chase Briscoe. Harrison Burton had arguably the best car but his car struggled on short runs and it took him so long to catch Cindric and get around him. He sits a very comfortable fourth in Playoff standings. Also with his second win of the year, Brandon Jones us now fifth on the Playoff grid.

Ryan Sieg was able to keep track position despite being on older tires to come home fourth. The points were huge for him as he has a 66-point lead over the cut line. It looked like Ross Chastain had an excellent chance to steal a win before the Jesse Little spin. A fifth-place run is still a strong result for Chastain though. Chastain is still looking for his first win of the season but he’s comfortably in the Playoff picture.

The Xfinity Series will have the week off before heading up north for the Henry 180 at Road America. Austin Cindric will look to keep up his hot streak and defend his win at the 4.048-mile road course. Coverage will be Saturday, August 8 at Noon EST on NBCSN. Can the road course ace pick up another win on a track where he’s the favorite?