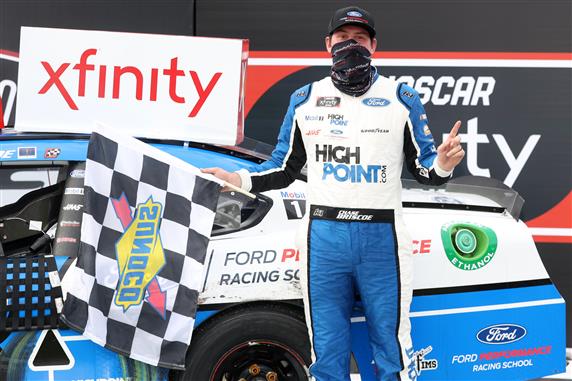 One month ago today, Chase Briscoe and his wife Marissa announced they were expecting their first child. Unfortunately, the young couple who married in November of 2019 faced the worst news this past Tuesday.

“Yesterday was the hardest day of my life,” Briscoe said in a Twitter post. “Marissa and I heard the worst news any soon to be parent could hear… That we wouldn’t be welcoming our daughter to the world on December 1st. I know God has a plan and we may not understand it but we seek Him and trust Him.”

Yesterday was the hardest day of my life. @MarissaBriscoe_ and I heard the worst news any soon to be parent could hear… That we wouldn’t be welcoming our daughter to the world on December 1st. I know God has a plan and we may not understand it but we seek Him and trust Him. pic.twitter.com/71uLSeQdsP

Now, just two days after the tragic news, Chase Briscoe found himself in victory lane after an intense battle to the finish with Kyle Busch.  During his post-race interview with FOX, the 25-year-old had tears flowing from his face.

“This is for my wife,” Briscoe said through tears. “This is the hardest week I’ve ever had to deal with. God is so good man. Even when I took the lead with 50 to go, I was crying inside the racecar. Just emotionally, I wasn’t there at all. Nothing other to say than God is just so glorious…This is more than a race win. This is the biggest day of my life after the toughest day of my life.”

A final lap that'll go down as one of the best at @TooToughToTame.@ChaseBriscoe5 holds off @KyleBusch in thrilling fashion and takes home an emotional Darlington win. pic.twitter.com/D2T12WM5z3

Chase Briscoe Had No Plan In Sitting Out

Though the pain remained strong as he strapped into the car, Briscoe says he never thought of missing out on the race.

“The whole race, I was kind of out of it. Especially the last 50 laps emotionally. But there wasn’t ever a thought about sitting out. Racing has always been the best therapy for my family. I knew Marissa was home watching and my family was. On Wednesday, I even told Marissa that I was going to win it for her. I was feeling the pressure of trying to put it together. I knew what it would mean for my wife.”

Briscoe also spoke about how hard it was to finish the race. He felt the finish was fate.

“At the initial start I was all over the place emotionally, and then when I had the lead with 50 to go I was just making so many mistakes because I was literally crying inside of the racecar. God is so good. To be able to do this and it’s all because of Him. Before I got dressed I prayed that whatever His will is, just let it be done today. I knew He was gonna have a high because of the low and it’s just unbelievable to win here at Darlington and to beat Kyle Busch doing it.

I was balling my eyes out during the last quarter of a lap,” Briscoe continued. “It was a Hollywood story, seeing Kyle in my mirror was just meant to be and ironic how it worked out with all the circumstances…God was driving the car the last eight or nine laps. I was emotionally a wreck, all over the place.”

Support From Others and the Use of His Platform

Following the race, Chase was asked if he’d thought about not publicly sharing news of their miscarriage. He told reporters that the couple has no regrets and are thankful for the support and prayers. They hope to use their platform as a support system for those struggling with the same tragedy.

“For us we talked about it and now, especially that we announced it, we couldn’t imagine not announcing it just because having that pent up inside you and nobody know what you’re dealing with, I think, would have been nearly impossible at least for me personally.

To be able to have the support of everybody and, like I was saying earlier, to have people reach out if there was anything we need, and lifting us up in encouragement I’m glad we did it and that’s honestly kind of the way we looked at it.

It’s unfortunate what we were dealt, but we felt like God did it for a reason and we felt like using our platform to maybe help others through it down the road that might be what our calling was. That was why we did it and now it’s truly a miracle. That’s the only way I can put it. It definitely makes more sense now. It still doesn’t make it any easier, but definitely makes a lot more sense.”