William Byron Blasts Away in Another iRacing Win at Dover 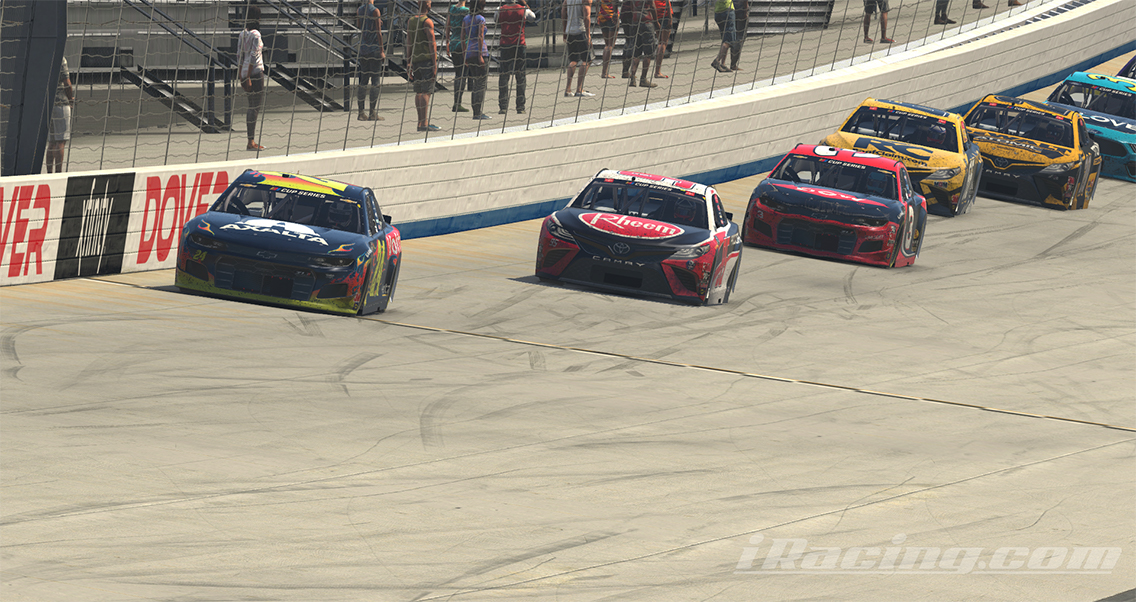 Stop me if you’ve heard this before-William Byron won an iRacing event. The virtual racing novice earned his third win in four weeks on the high banks of Dover International Speedway. A late caution did set Byron back, but he was able to storm through the field to retake the lead. Though Byron is having more fun than anyone with the iRacing Pro Invitational Series, he is more than ready for real racing to resume.

Despite starting eighth, it did not take William Byron long to find the lead. The Axalta flames No. 24 took control on lap 24 and hardly looked back. In the end, Byron would lead 79 of the 150 laps at The Monster Mile, taking a winning margin of three-tenths of a second. For Byron, Dover marks his third iRacing win in four weeks, after Bristol and Richmond. Last week at Talladega though, Byron finished sixth after a crash.

While up front it was a domination by Byron, back in the pack was chaos. Over the 150-lap distance, nine cautions would slow the pace. Pit strategy was largely caution-driven. There never was a run long enough for green flag pit stops to ensue.

The final caution with John Hunter Nemechek dumping Denny Hamlin on lap 135 set up a split strategy. All of the leaders came in for fresh tires. However, four drivers would only take two tires and leapfrogged Byron. Timmy Hill, Garrett Smithley, Landon Cassill, and Ross Chastain would all restart ahead of the 24 with just ten laps to go.

On the restart, Byron was incredibly aggressive, as he spun Cassill to regain lost ground. By the exit of turn two, Byron was up to second, quickly chasing down Hill. The two drivers who decided Texas amongst themselves would also race it out for the Dover win. With much fresher tires though, Byron made it look easy as he executed the winning pass into turn three with seven laps left. From then on, Byron set sail for his third iRacing win. Byron would go from fifth to the lead in just three laps to take this win.

“It was a lot of fun today,” Byron said. “Obviously there was a lot of cautions so I just had to kind of pace myself. It was hard to predict when we were going to get a longer run so it’s hard to know what to do with the tires in terms of how much to save.”

Though Byron has been the most successful in the Pro Invitational Series, his focus after the win quickly pivoted back to real-life racing. Byron’s first race back in his No. 24 Chevrolet Camaro will be at Darlington on May 17. “It’s going to be difficult. I think the biggest thing is just trying to prepare yourself well physically. Obviously you’re not going to get that chance to really go through practice and kind of warm up your muscles, I guess you could say, to get ready in the car.

Honestly I’ve just been doing some training and trying to watch some old film of races at Darlington. With it being a daytime race, it’s going to be different as well. A lot of different variables there. The biggest thing is just being prepared. I’ve used iRacing to train me on the mental side, which I think has really helped me. I’m looking forward to carrying that confidence and momentum over to the Cup car.”

Before real-life cars hit the track again in Darlington, there will be one more iRacing event. This may be the most anticipated and most popular event, as iRacing is previewing their new rendering of North Wilkesboro Speedway. Coverage of this special event will be next Sunday, May 10 at 3 PM EST on FOX and FS1. The last time a NASCAR Cup Series race ran at the Carolina short track was September 1996. As a result, some drivers will be running on a virtual track that hosted its last race before they were born. On the Dover broadcast, Jeff Gordon also teased that he may run this race. Gordon won the last Cup race at North Wilkesboro nearly a quarter-century ago.

With iRacing winding down, the resumption of the 2020 NASCAR season is fast-approaching for all three series. Be sure to stay tuned to our writers on Twitter for all of the latest news as Darlington draws ever closer.

NASCAR Announces Resumed Schedule for Month of May
What is the Future for iRacing?
%d bloggers like this: