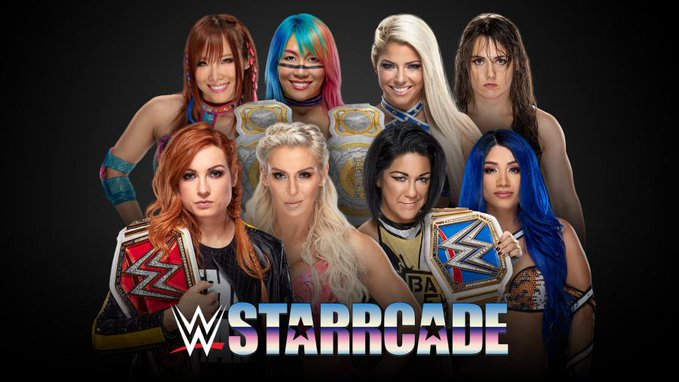 Starrcade, first produced by Jim Crockett Promotions (JCP) then to World Championship Wrestling (WCW) and now to WWE; a live event on a Sunday Night, usually airing around Thanksgiving Day.

“The tradition of Starrcade carries into WWE Network for the third year in a row, streaming live this Sunday beginning at 7 ET / 4 PT.

The following matches have been announced for this monumental special event:

Starrcade will air from the Infinite Energy Center in Duluth, Ga. The in-arena program will begin at 6:30 p.m. ET. Tickets are available at www.axs.com.

Check back with WWE.com for more matches as they are announced.”

Other matches that the WWE still haven’t announce yet but advertise by the Infinite Energy Center are:

-A Steel Cage Match for The WWE Universal Championship

-2-on-1 Handicap Match
The Miz vs. Shinsuke Nakamura & Sami Zayn

TSJ Writer’s View on the card.

We all know who’s going to win, a match between The Fiend and Strowman; but how the fiend will beat the monster among men, that will be interesting. Another match I’m not sold is the Miz vs Nakamura & Sami Zayn…come on WWE…do you really have to make a match like that? Why can’t you just make the match between the two for the IC title?

Starrcade: this year is mostly centered on the women’s division?

The reason I say it’s centered on the women is that they put the women’s tag team titles on the line with both Raw and Smackdown Women’s Champions; with their respective partners.

And on top of that, we will be seeing a returning Alexa Bliss in that match. I don’t know what Kabuki Warriors did to the WWE management to have this much stack against them. Or is it the rumors are coming true about Kairi Sane possibly leaving WWE soon.

Another title match that won’t be changing is The New Day and The Revival; because a few days ago Scott Dawson tweeting about watching Tully Blanchard on his iPad; who is now working as an exclusive advisor for Shawn Spears in AEW. A continuous hint from the Revival to jump ship to AEW once their contract expires or possibly trying to get fired from WWE.

Reigns and Corbin match, without the mascot and scripted jokes, will be a good match; but the only match I looked forward to is Mysterio vs Owens for the US title if Aj Styles is in the match. Why? Because he has been in the past two events.

What matches are you look forward to? Do you feel different about the matches?