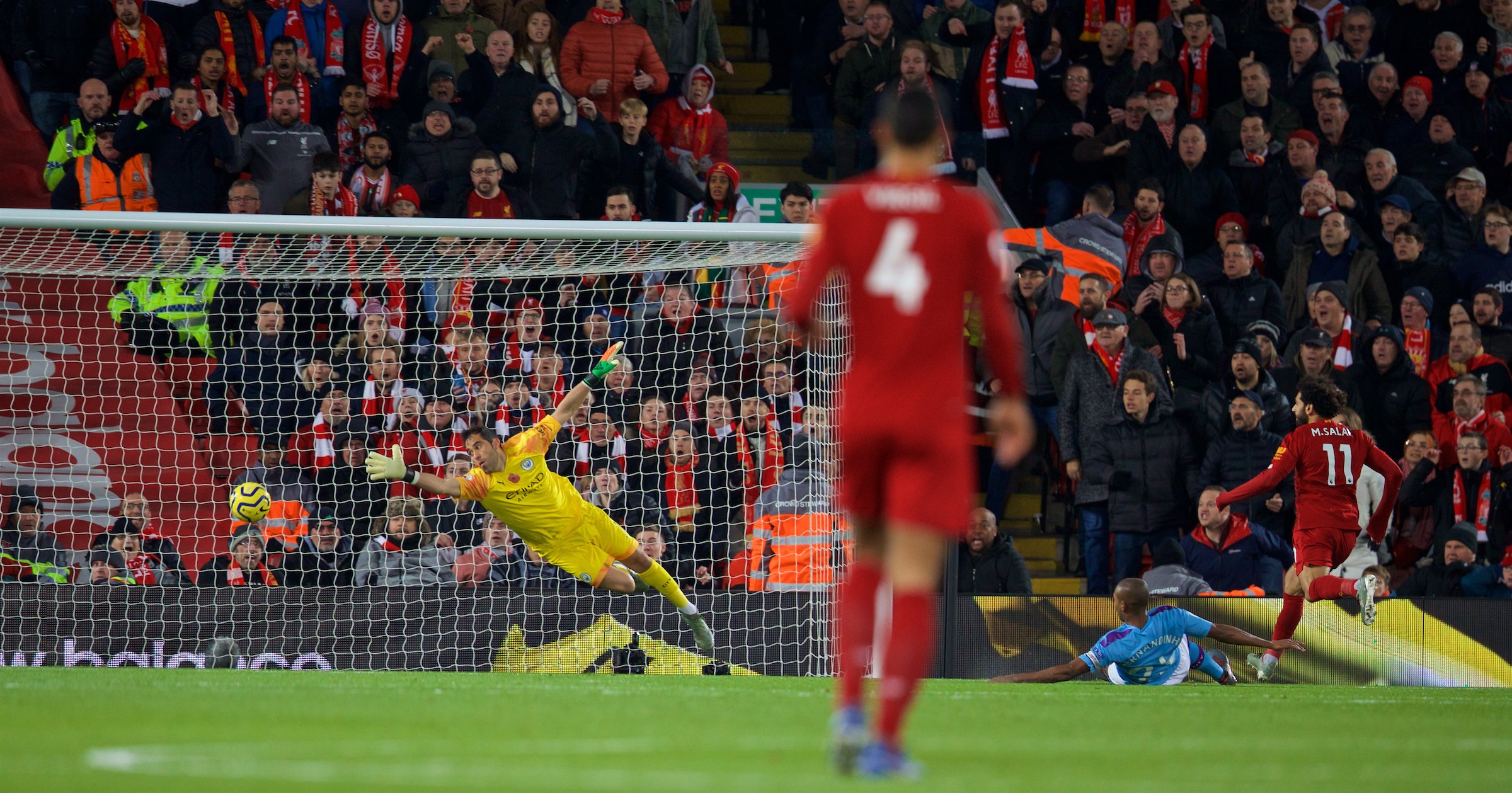 Liverpool moved eight points clear at the top of the Premier League table as they comfortably defeated Manchester City at Anfield.

Fabinho fired Liverpool in front after just five minutes rifling a shot into the roof of the net. Seven minutes later, they doubled their lead thanks to header from Mo Salah.

Five minutes into the second half, Liverpool sealed the victory as Sadio Mane headed home a brilliant cross by Jordan Henderson.

Bernardo Silva scored for Manchester City late on, which only proved to be a consolation on what was a miserable afternoon for the Citizens.

Manchester City had plenty of possession and did have their chances, especially in the first half. However, their makeshift defense cost them.

There will be big questions over Pep Guardiola’s team selection. Especially, the decision to start with Angelino at left-back instead of Benjamin Mendy.

This according to Guardiola was due to tactical reasons. However, it is fair to say that was the wrong decision, as Angelino looked out of his depth.

It is a long way back for City who are now nine points behind Liverpool. Their hopes of making it a hat-trick of Premier League titles in a row looks slim.

Meanwhile, Liverpool can only throw the title away and will never get a better chance of finally winning a Premier League title.

On five minutes, Manchester City were looking for a penalty for a handball against Liverpool defender Trent-Alexander Arnold. It wasn’t given and Liverpool went up the other end and took the lead.

City midfielder Rodri gave the ball away to Fabinho 25 yards from goal. The Brazilian midfielder took a touch and unleashed a thunderbolt of a shot past Claudio Bravo in the Manchester City goal.

Manchester City had dominated possession in the opening stages but fell further behind after 12 minutes.

Despite having less of the ball Liverpool were clinical in front of goal and took both of their opportunities.

Manchester City were looking for a quick response. However, a shot from Sergio Aguero inside the penalty area was comfortably palmed away by Alisson in Liverpool’s goal.

Pep Guardiola’s side were starting to extert some pressure. On 28 minutes, a shot from Angelino from just inside the box took a deflection and clipped the base of the post.

Liverpool almost made it three after 38 minutes. Trent Alexander-Arnold drove forward and played a pass to Roberto Firmino. The Brazilian then unleashed a shot from just inside the box, which went straight at Claudio Bravo who comfortably saved it.

Liverpool made the perfect start to the second half and added a third after 50 minutes. A magnificent cross by Jordan Henderson picked out Sadio Mane at the backpost who headed the ball into the net.

On 68 minutes, City had a great chance to pull a goal back. Kevin De Bruyne cut the ball back to Sergio Aguero who somehow couldn’t divert the ball into the net.

That pretty much summed up Aguero’s afternoon who incredibly has never scored a goal at Anfield.

Manchester City pulled a goal back with 13 minutes to go. A cross by Angelino found it’s way through to Bernardo Silva who drilled a shot past Alisson from outside the box.

They pushed forward but couldn’t force another goal to set up a grandstand finish, as Liverpool held on for a massive victory.

Liverpool Have One Hand On The Premier League Trophy

They are eight points clear of Leicester City in second place and although they lost a similar lead last season, you can’t see them doing it again this time around.

Yes, there are some tricky trips to come over the next few months. They have away games to Tottenham, Arsenal, Leicester and a visit to the Eithad to face City next year.

Also, they have a congested December to deal with. They will play 10 games next month in all competitions, which includes a trip to Qatar for the Club World Cup.

However, the only thing which looks like stopping them is if they get some injuries.

If they do pick up injuries to Virgil Van Dijk, Mo Salah, Roberto Firmino and Sadio Mane in particular that may be the only thing that derails them.

So far, they have been lucky with injuries and if they continue to be, they will be winning their first league title since 1990.

Manchester City’s biggest problem so far this season has been their defense. With Aymeric Laporte out injured and Nicolas Otamendi, Man City had to once again play Fernandinho as a makeshift center-back.

Pep Guardiola’s decision to play Angelino instead of Benjamin Mendy was in the end a big mistake, as the Brazilian looked out of his depth.

City’s defense was given a torrid time. Their defending for the second goal was poor as Fernandinho failed to pick up Mo Salah at the backpost.

City have been unlucky with injuries so far this season. However, given the amount of money they have spent over the years, they should have better center-back cover.

You can get away with playing Fernandinho at center-back against lesser sides but not when you are playing the champions of Europe.

Manchester City are already eight points behind Liverpool. Even though there is a long way to go, it would take a miraclous comeback if they are to win a third successive Premier League title.

If they do so, it will arguably be Pep Guardiola’s greatest achievement.

Next up for Manchester City is a home clash against Chelsea after the international break.