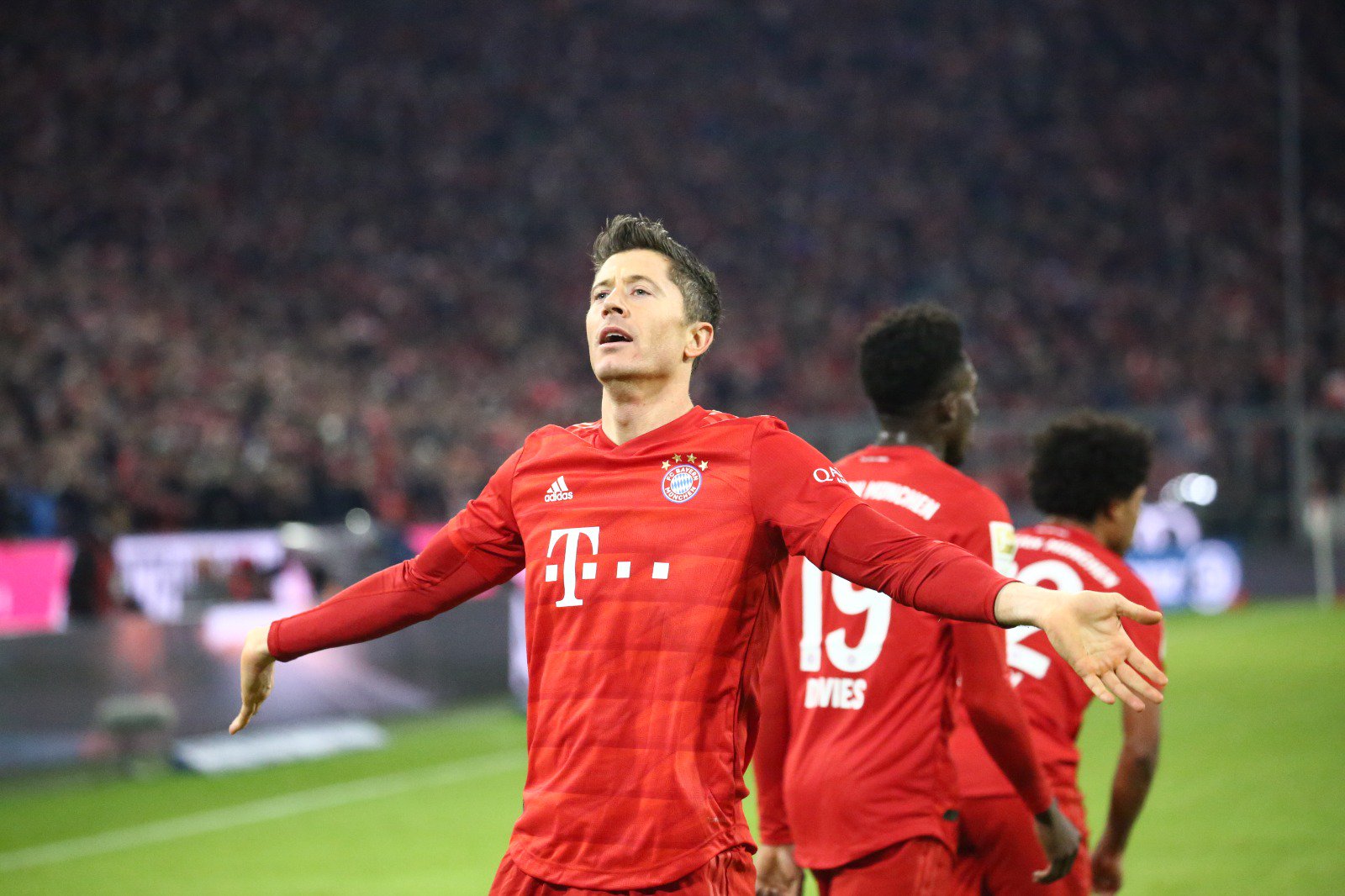 Lewandowski made it three with 15 minutes to go, taking his tally to 16 for the season in the Bundesliga and continuing his run of scoring in every single Bundesliga game so far this season.

An own goal from Mats Hummels late on summed up Dortmund’s evening in what was such a dispiriting performance from Die Schwarzgelben.

Incredibly, Dortmund have now conceded 15 goals in their last three Bundesliga visits to the Allianz Arena.

For Bayern, after a turbulent week, which saw them lose 5-1 against Eintracht Frankfurt, which resulted in the sacking of their manager, Niko Kovac, this will be a welcome confidence boost against their big rivals.

It will also give caretaker manager Hans-Dieter Flick a greater chance of getting the job on a permanent basis.

Bayern Munich took the lead after 17 minutes and once again it was Robert Lewandowski on the scoresheet. Benjamin Pavard crossed the ball into the box and found Lewandowski unmarked in the penalty area. The Polish striker was able to plant his header past Roman Burki in the Dortmund goal.

Incredibly, Lewandowski has scored in every single Bundesliga game so far this season.

Bayern Munich were starting to pile on pressure on Dortmund’s defense. A cross by Robert Lewandowski was almost flicked into the net by Kingsley Coman but the ball was cleared off line by Mats Hummels.

Borussia Dortmund were struggling to get any foothold into the game and were unable to create anything throughout the first half.

Bayern Munich doubled their lead right at the start of the second half. A cross into the box from Thomas Muller was missed by Robert Lewandowski inside the box. However, the ball broke to Serge Gnabry who tapped the ball into the net.

Intially the goal was disallowed for an offside decision against Lewandowski. But after a VAR check the goal was given.

Minutes later, Bayern almost had a third. A great cross by Kingsley Coman was put wide by Gnabry at the backpost.

Dortmund were lacking any sort of inspiration with the likes of Thorgan Hazard, Julian Brandt and Mario Gotze fairly anonymous throughout the game.

On the hour mark, Bayern should have been out of sight. Kingsley Coman played a through ball to Lewandowski. The Polish striker skipped past Mats Hummels but surprisingly hit his shot wide of goal from just inside the box.

Dortmund’s best chance came after 69 minutes. A cross by Achraf Hakimi eventually found it’s way through to substitute Paco Alcacer who was unable to turn the ball into the net.

On 75 minutes, Bayern sealed all three points. Thomas Muller played a ball through to Lewandowski who coolly slotted the ball past Roman Burki.

The Polish striker has now scored 16 goals in the Bundesliga, the most after 11 matchdays in the history of the league.

Four minutes later, Bayern made it four. Dortmund defender Mats Hummels diverted the ball into his own net following a cross by Ivan Perisic.

That pretty much summed up a miserable day at the office for Borussia Dortmund.

It has been a turbulent week for Bayern Munich after their 5-1 defeat to Eintracht Frankfurt last weekend, which resulted in the sacking of Niko Kovac.

An uninspiring victory against Olympiakos in the Champions League hardly did anything to silence Bayern’s critics.

However, despite the recent upheaval they managed to completely dominate Der Klassiker. Both Kingsley Coman and Serge Gnabry were a threat out wide throughout the match.

While Robert Lewandowski continued his incredible run of form. The Polish striker has now scored in every single Bundesliga and Champions League game this season.

Arguably, he is the currently the best number nine in the world and to be in November and to score in every single league and European game is simply sensational.

With the international break upcoming, there will be plenty of speculation over the next two weeks as to who will get the Bayern Munich job on a permanent basis.

Caretaker boss Hans-Dieter Flick has done himself no harm at all by winning Der Klassiker. Would Bayern give him the job permanently? That seems unlikely.

The most likely candidates do seem to be Ajax manager Erik ten Haag or former Juventus boss Massimiliano Allegri. It is set to be an interesting few weeks in Bavaria.

Dortmund Fail To Show Up

Borussia Dortmund boss Lucien Favre will be bitterly disappointed with his sides display.

After coming from two goals down to beat Inter in the Champions League in midweek, you would have expected them to go into this game full of confidence.

Especially, given that Bayern had just sacked their manager and got beat 5-1 by Eintracht Frankfurt last weekend.

However, they were so poor and put in a flat performance. They barely tested Manuel Neuer in the Bayern goal and failed to put a makeshift Bayern defense under any sort of pressure.

Defensively they looked so open at times, as Bayern’s wingers had so much space out wide. This is a huge blow to Dortmund’s title hopes and question marks will be raised over their mentality to be able to win these big games, especially on the road.

Dortmund haven’t won at the Allianz Arena since April 2014 and they never looked likely to break that run. This result leaves them down in fifth in the Bundesliga and are three points behind league leaders Borussia Monchengladbach.

That could increase to six points, if they win tomorrow against Werder Bremen. With the international break coming up, there is a lot to think about for Lucien Favre.

Next up, for Dortmund is a home game against Paderborn in two weeks time.

Meanwhile, Bayern are away to Fortuna Dusseldorf in the Bundesliga.