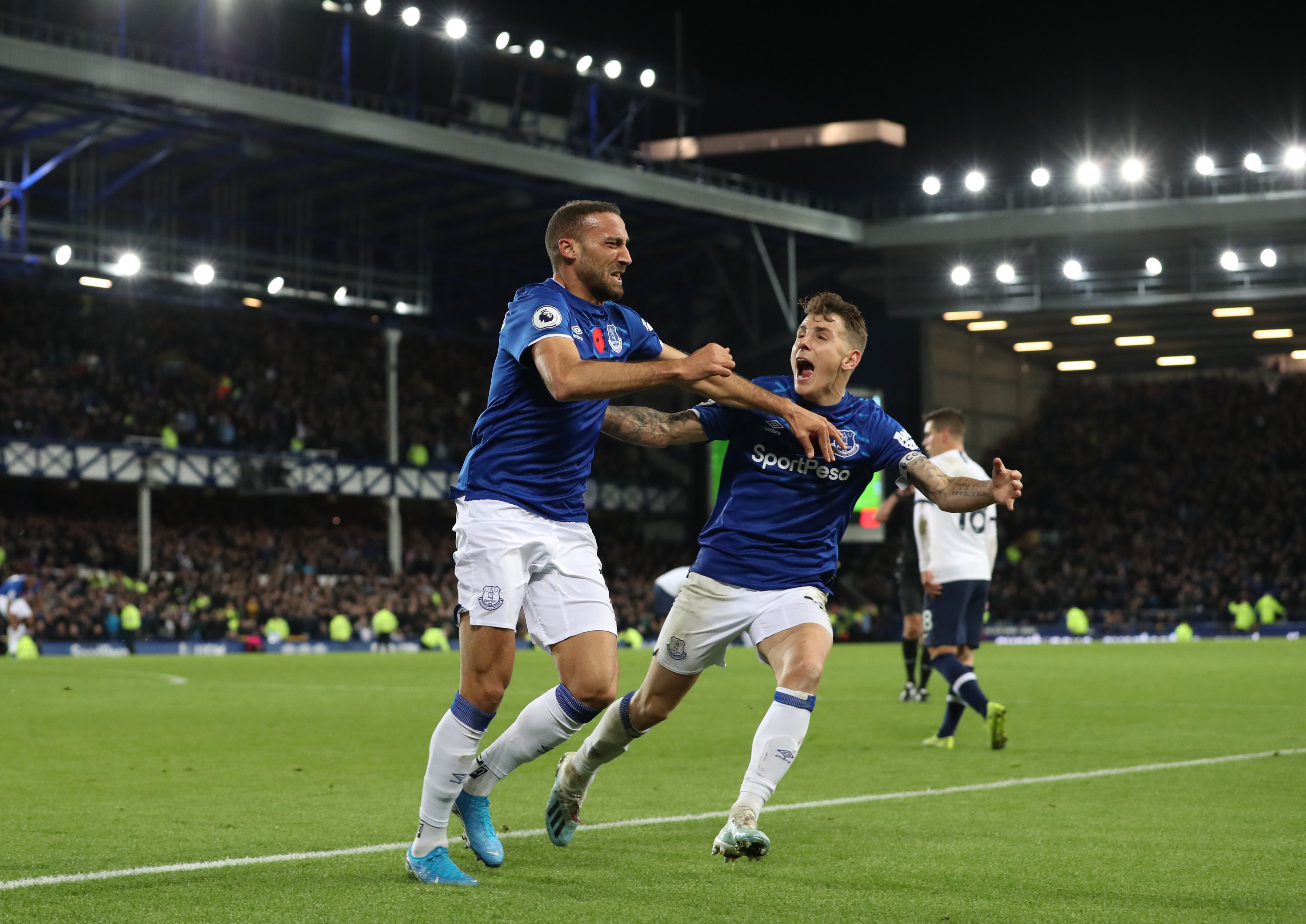 Tottenham were denied their first Premier League away victory since January, as a late stoppage time header by Cenk Tosun earned Everton a point at Goodison Park.

Dele Alli put Tottenham ahead just after the hour mark firing the ball past Jordan Pickford in the Everton goal.

However, they were denied all three points by a header from Cenk Tosun in the seventh of 12 stoppage time minutes.

The game will be overshadowed by a serious looking injury to Everton midfielder Andre Gomes.

The Portuguese international was clipped from behind by Tottenham midfielder Son and appeared to get his leg stuck in the turf as he fell down.

Immediately, the medical team was brought onto the pitch with players from both sides appearing very distressed by the injury. Son was close to tears and was sent off, even though the challenge itself wasn’t the cause for Gomes’s injury and didn’t appear to warrant a red card.

That will be a big concern for Everton boss Marco Silva who will be satisfied with a point in a match lacking quality.

No Kane For Spurs

The big team news ahead of the game was that Tottenham star striker Harry Kane was missing from the squad due to a virus. Spurs boss Mauricio Pochettino decided to start Lucas Moura in the lone striker role instead.

It was a scrappy start to the game with neither side able to create any clear cut opportunities and the game turning into a midfield scrap.

It took 32 minutes before the first shot on target from either side. Everton full-back Lucas Digne crossed the ball into the box, which found Richarlison in the box. The Brazilian spun and hit a first time shot, which was comfortably saved by Paulo Gazzaniga in the Spurs goal.

Other than that it was a poor first half with neither side offering any kind of creative spark.

Five minutes into the second half, Tottenham felt they should have been awarded a penalty. Everton defender Yerry Mina slipped and made contact with Tottenham winger Son Heung-Min.

The South Korean international did appear to make the most of the contact and after a VAR check, the referee decided against awarding a penalty.

On 61 minutes, Everton almost took the lead. Once again, Lucas Digne and Richarlison combined but once again the Brazilian’s shot was straight at Paulo Gazzaniga in the Spurs goal.

Two minutes later, Tottenham took the lead. Everton midfielder Alex Iwobi gave the ball away to Son inside his own half. He played the ball through to Dele Alli who cut inside and fired the ball past Jordan Pickford in the Everton goal.

Moments later, a corner swung in by Lucas Digne appeared to hit the hand of Tottenham midfielder Dele Alli who rose to try and head the ball with Yerry Mina.

After a lengthy VAR check, which lasted almost two minutes, the referee pointed for a corner instead.

With ten minutes to go, Son clipped Everton midfielder Andre Gomes. Immediately the players were urging the medical team to get on the pitch, as it looked a bad looking injury with Gomes’ foot appearing to get stuck in the turf.

Son was distraught and was in tears, as well as Serge Aurier who went in for a challenge seconds later. The referee gave Son a red card, even though the challenge itself didn’t appear to merit one.

After a lengthy delay, Gomes was taken off on a stretcher and could be out for some time.

Following the lengthy stoppage and VAR checks there was 12 minutes of added on time.

In the seventh minute of stoppage time, Everton equalized. A cross by Yerry Mina was fired into the box first time by Lucas Digne. He picked out substitute Cenk Tosun who headed the ball past Gazzaniga and into the net.

They couldn’t find a winner, as both sides had to settle for a point.

Everton Satisfied With A Point

Everton boss Marco Silva will be happy that his side managed to salvage a point.

However, they were poor and lacked quality going forward. But they showed great spirit and got their reward late on.

There will be big concerns though after the injury picked up by Andre Gomes. Both sets of players looked distressed by the injury sustained by the Portuguese international.

This signals that it could be a serious injury, which could keep him for a long time. That would be a massive blow for Everton given he has been one of their better players this season.

Despite earning a point, the pressure is still on Marco Silva. They are only three points above the relegation zone and face a massive clash away to Southampton next week.

If they lose that Marco Silva could be heading towards the exit door at Goodison Park.

Tottenham boss Mauricio Pochettino will be frustrated that his side couldn’t hang on for their first Premier League away win since January.

This wasn’t a performance that will silence their critics.

They struggled going forward and didn’t create many clear cut chances. Pochettino will now be missing Son for the next Premier League game and will be hoping that Harry Kane is back for next weekend.

A lot of their players aren’t performing to the heights that they have been over the last few years.

Whether there has been a Champions League hangover after losing the final last season or players not wanting to be at the club, there still seems to be a lot of problems.

Next up for Tottenham is a trip to Serbia to face Red Star in the Champions League.

Meanwhile, Everton travel to Southampton in the Premier League.