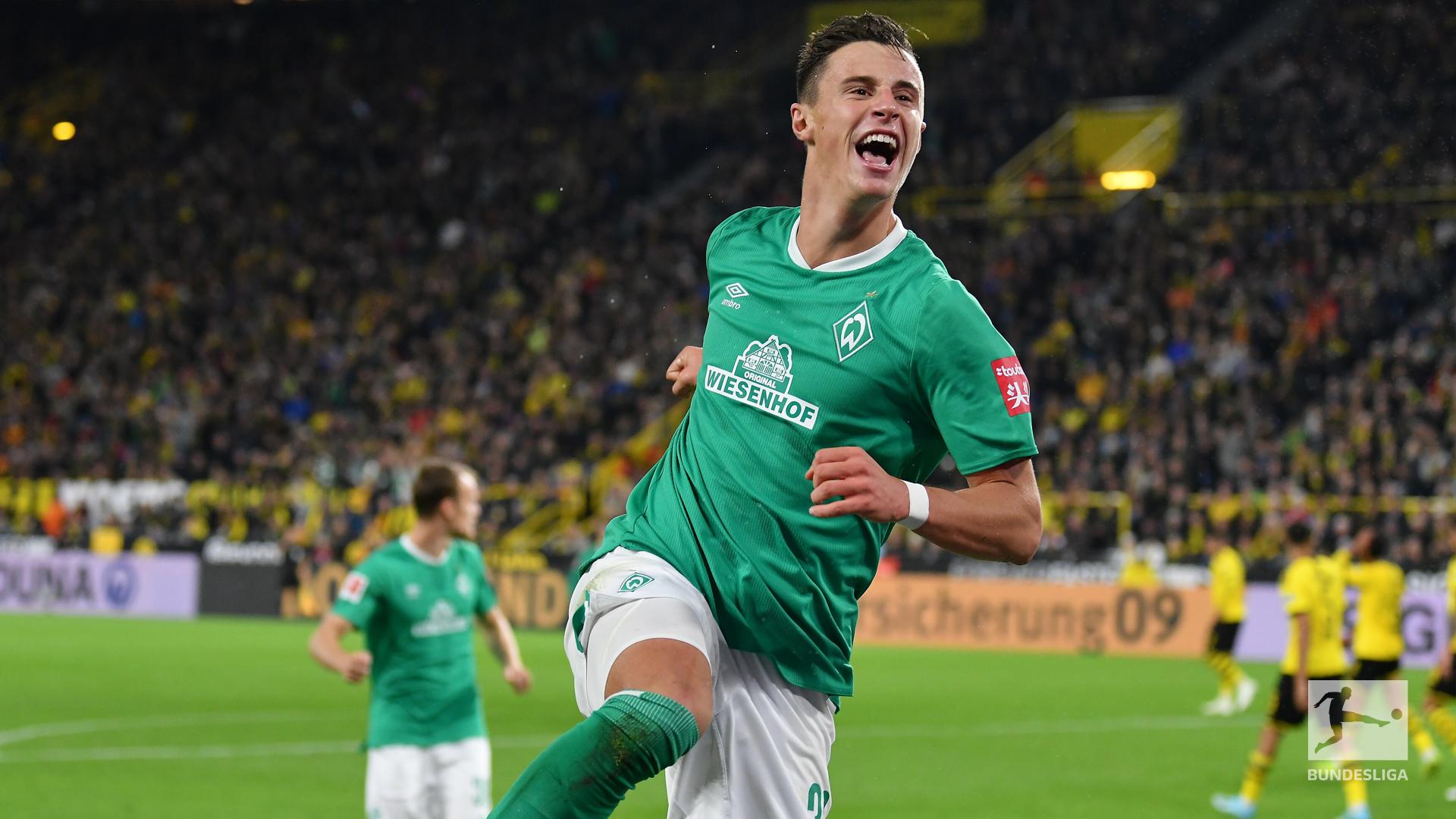 Borussia Dortmund were held by Werder Bremen at Signal Iduna Park, as they lost ground on Bundesliga leaders Bayern Munich.

Bremen took a shock lead after just seven minutes with midfielder Milot Rashica firing the away side in front.

However, headed goals from Mario Gotze and Marco Reus looked to have put Dortmund in control. But a header from Marco Friedl early in the second half meant Lucien Favre’s side had to settle for a point.

With victories for Bayern Munich and rivals Schalke earlier in the day, it means Dortmund have lost further ground at the top of the table.

They are now three points behind Bayern and have won just three of their opening six Bundesliga games.

Meanwhile, Werder remain in 10th place and will be delighted to come away with a point, given the amount of injuries they currently have.

Gotze And Reus Put Dortmund Ahead

Werder Bremen took a shock lead after just seven minutes. Dortmund midfielder Axel Witsel lost the ball to Davy Klassen just inside his own half. The Werder Bremen midfielder played a brilliant ball over the top to Milot Rashica.

The Kosovo midfielder controlled the ball and then fired it past Roman Burki in the Dortmund goal to give the visitors the lead.

However, their lead lasted just 90 seconds. A great cross into the box by Lukasz Piszczek picked out Mario Gotze at the backpost. The German World Cup winner headed the ball past Jiri Pavelenka who got a touch but couldn’t keep it out.

Borussia Dortmund were beginning to dominate possession but were struggling to create any clear cut chances.

On 29 minutes, Dortmund midfielder Thorgan Hazard unleashed a powerful shot from just outside the box, which went just over the top of the crossbar.

Four minutes before half time, Dortmund took the lead. Axel Witsel played the ball out wide to Thorgan Hazard. The Belgian then played a great cross into the box, which was flicked into the net by the head of Marco Reus to put Dortmund in front.

Dortmund were pushing to extend their advantage before half time. Mario Gotze played a through pass to Mahmoud Dahoud who’s close range shot was saved by the foot of Jiri Pavelenka in the Bremen goal.

Ten minutes into the second half, Werder Bremen equalized. A corner swung in was flicked on by Josh Sargent. The ball fell to Marco Friedl at the backpost who headed the ball into the net from close range.

Werder Bremen were starting to dominate possession and were looking more confident. In contrast, Dortmund were beginning to become more frustrated, as they struggled to regain control of the game.

On 70 minutes, Dortmund almost took the lead once more. First Achraf Hakimi had a shot from 20-yards-out, which was parried away by Pavlenka. The rebound fell to Thorgan Hazard but his shot was brilliantly blocked by Werder midfielder Marco Friedl.

Werder were still a threat going forward and striker Josh Sargent had a shot well saved by Roman Burki from just inside the box.

In stoppage time Dortmund wasted a great chance to win it. Julian Brandt drove into the box and cut the ball back to substitute Paco Alcacer but the Spaniard fired his shot over the bar.

Dortmund manager Lucien Favre will be incredibly frustrated with his sides display.

Once again, their defense was unable to keep a clean sheet. They have only had one shutout this season in the Bundesliga and have now conceded four goals in their last two Bundesliga games.

Going forward, they are scoring plenty of goals and have the firepower to trouble teams in the Bundesliga.

However, if they don’t sharpen up their defense their hopes of winning the title will disappear very quickly.

After Leipzig lost to Schalke and Bayern Munich winning away to Paderborn, this was a game Dortmund could ill afford to drop points in.

Despite, coming from behind and dominating the first half, they were poor in the second half. It was poor defending for Werder Bremen’s equalizer and they failed to break down a resolute Bremen defense.

Much more troubling for Favre is this was a makeshift Bremen side and they failed to take advantage in the same way their title rivals Leipzig did the previous week. They were able to comfortably win 3-0 away from home.

Dortmund must bounce back quickly and will expect to do so in a crucial Champions League game in Prague on Wednesday.

Werder Bremen showed fantastic spirit to come away with a point. Bremen manager Florian Kohfeldt will be delighted given the amount of injuries they have.

They currently have six players out injured, including left-back Ludwig Augustinsson and centre-back Sebastian Langkamp.

However, their make shift defense defended superbly in the second half. Also, they took their chances and deservedly held on for a point.

It has been a mixed start to the season for Kohfeldt’s side but he will be hoping that this kick starts their season.

If they perform like this and show the same spirit, they could challenge for the European spots this season.

Next up, Bremen travel to Eintracht Frankfurt on Sunday in the Bundesliga.

Meanwhile, Dortmund travel to the Czech Republic to face Slavia Prague in the Champions League on Wednesday.