Watford Fight Back To Secure A Point Against Arsenal 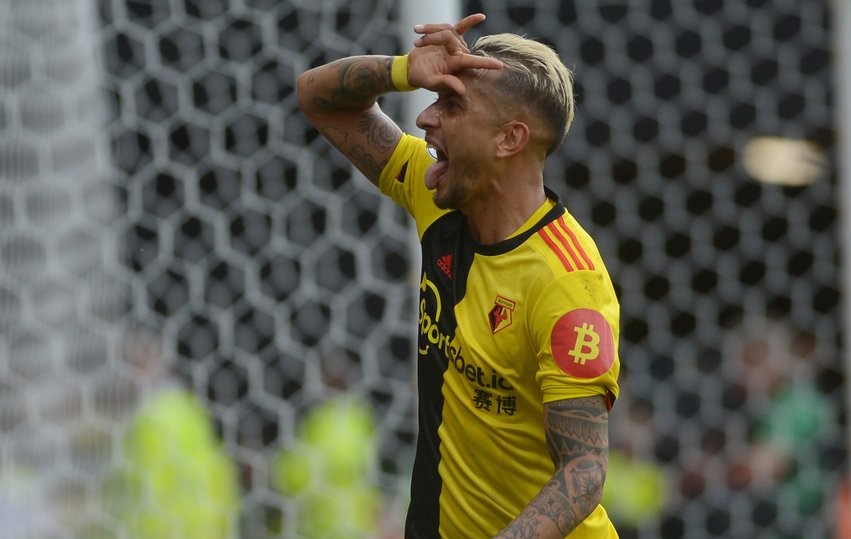 Watford Fight Back To Secure A Point Against Arsenal

Watford fought back from two goals down to rescue a point against Arsenal at Vicarage Road who missed the chance to go third in the Premier League table.

Two first half goals from Pierre-Emerick Aubameyang put Arsenal in control despite a bright opening from the home side.

However, Watford under new manager Quique Sanchez Flores, dominated the second half.

Tom Cleverley got them back into the game with a fine strike after a dreadful defensive error from Arsenal center-back Sokratis.

Then with 11 minutes to go, substitute Roberto Pereyra was brought down inside the penalty area by David Luiz.

He then stepped up and calmly despatched the penalty to secure only Watford’s second point of the season.

Watford could have won it late on. However, Abdoulaye Doucoure’s shot from the center of the penalty box went straight at Arsenal keeper Bernd Leno, when he really should have scored.

However, they will be much the happier of the two sides. For Arsenal, it was a chance missed to go level with Manchester City in the Premier League table.

It was a bright start from Watford who had the majority of possession in the early stages.

On five minutes, Watford midfielder Gerard Deulofeu tested Bernd Leno from 20-yards-out. However, his shot was straight at the German goalkeeper.

Moments later, Watford midfielder Tom Cleverley picked up the ball in space just outside the box. He unleashed a powerful shot, which was tipped over the bar by Leno.

Watford were playing with a lot of intensity in the opening 20 minutes and were snapping at Arsenal’s heels and making life very uncomfortable for them.

However, after 21 minutes Arsenal took the lead against the run of play.

Arsenal midfielder Dani Ceballos won the ball off Will Hughes in midfield. Watford players stopped expecting the referee to award them a free-kick. However, the referee waved play on and Arsenal took full advantage.

Sead Kolasinac carried the ball forward and passed to Pierre-Emerick Aubameyang inside the penalty area.

The Gabon international brilliantly spun and smashed a shot into the net to give the Gunners the lead.

Arsenal were starting to dominate and doubled their lead after 31 minutes.

A brilliant through ball from Mesut Ozil allowed Ainsley Maitland-Niles to look up and cut the ball across the penalty area to Aubameyang, who capped off a fine move with a simple tap in.

Despite a great start to the game, the goals from Aubameyang seemed to sap the confidence from Watford as their defensive problems were their undoing in the first half yet again.

Nine minutes into the second half, Arsenal gifted Watford a lifeline.

Sokratis gave the ball straight to Gerard Deulofeu inside the penalty area. He cut it back to Tom Cleverley who fired his shot past Bernd Leno to get Watford back into the game.

For Arsenal, you have to wonder why they were trying to play out from the back when they were two goals in front.

On 64 minutes, Watford had a great chance to equalize. A neat through ball from Deulofeu found subsitute Ismaila Sarr inside the box. However, his shot went way wide when he should have done better.

The pressure was starting to mount for Arsenal, as Watford had dominated the second half and looked likely to find an equalizer.

With just 11 minutes to go, Watford had the chance to equalize. Substitute Roberto Pereyra ran into the penalty area and was brought down by Arsenal defender David Luiz.

Pereyra dusted himself off and stepped up to take the penalty. He coolly slotted the ball into the net sending Leno in the Arsenal goal the wrong way.

Incredibly, it was the third game in a row that Arsenal have conceded a penalty.

Minutes later, Watford almost took the lead with Deulofeu curling a shot just wide from inside the box.

In a pulsating end to the game, Watford had a golden chance to win it.

Abdoulaye Doucoure strode forward and passed out wide to Ismaila Sarr. He cut the ball back to Doucoure who had carried on his run inside the penalty area. The Frenchman looked destined to score but his shot was straight at Leno.

Both sides had to settle for a share of the spoils in a terrific game and a great advert for the Premier League.

Watford Won’t Be Bottom For Much Longer

If Watford play like this, they won’t be bottom of the Premier League for much longer.

They played with an incredible intensity, which has been missing from their opening four games.

New boss Quique Sanchez Flores was undoubtedly a factor in this new spring in their step.

They have players in midfield who will cause teams problems and the effort shown by Etienne Capoue and Abdoulaye Doucoure was quite incredible.

Both looked dead on their feet at the end, as both sides looked for the winner.

Sanchez Flores knows they have to be tighter at the back but will be happy with his sides performance. If they play like this on a regular basis, they should be able to climb the table in no time.

Arsenal boss Unai Emery will know that this was an opportunity missed to move into the top four.

They were second best for large spells of the first half but with Pierre-Emerick Aubameyang taking both of his chances, they looked on their way to three points.

However, once again their defense cost them. Watford’s first goal was unforgivable from an Arsenal perspective.

Why is Sokratis trying to play out from the back when they are two goals in front? There is simply no need. It is ok if you have the players who can play this way but Arsenal don’t.

That allowed Watford back into the game and gave their fans a lift. Then center-back David Luiz gave away a penalty, which was poor defending.

Arsenal won’t reach the top four with this defense and Unai Emery has to change his approach of playing out from the back.

More often that not, it is going to cost them.

Next up for Arsenal is a trip to Germany to play Eintracht Frankfurt in the Europa League on Thursday.

For Watford, they travel to the Etihad to face Manchester City in the Premier League.