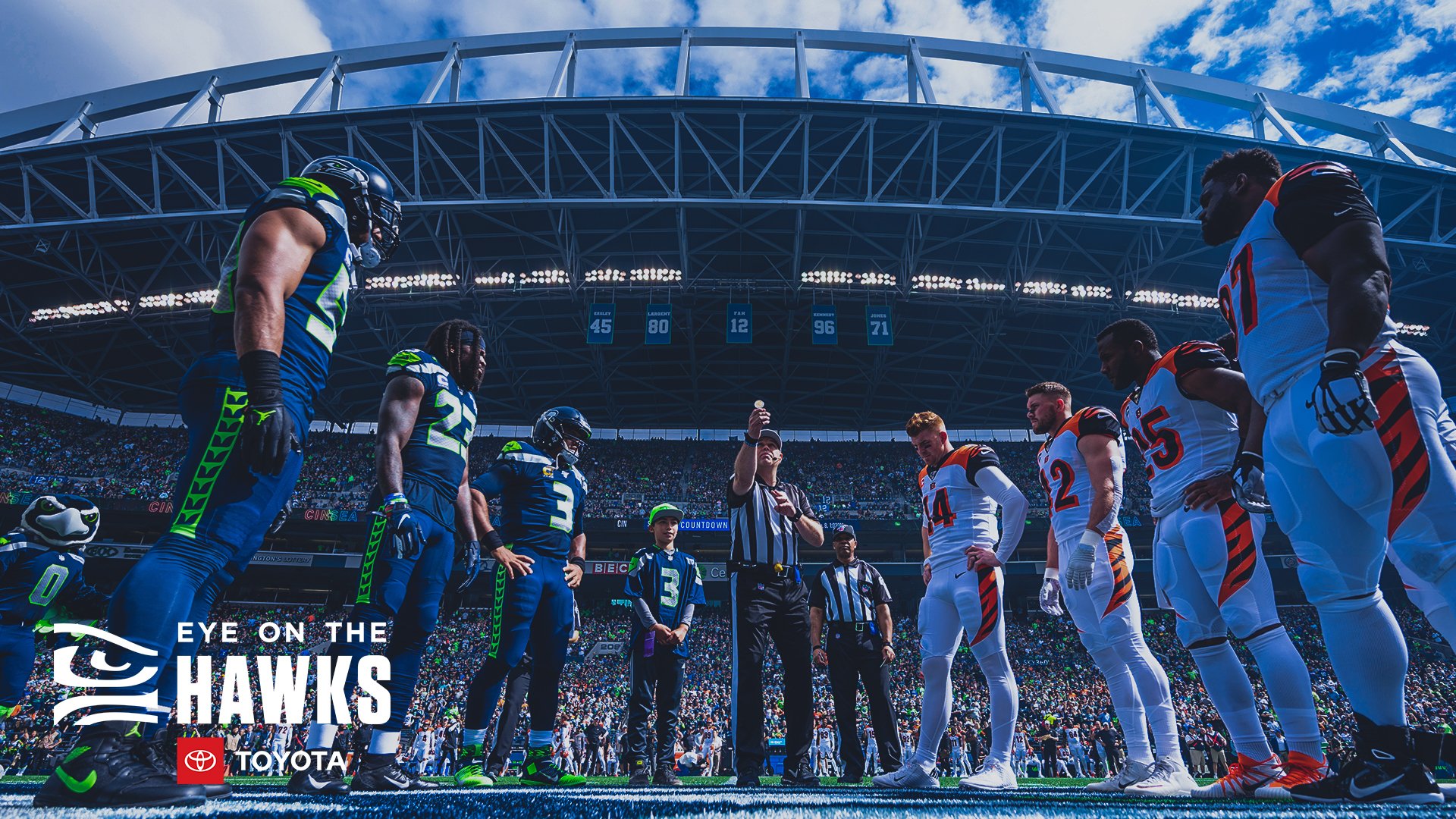 After what many believed to be a team to be on the decline, the Seattle Seahawks proved many wrong last season. They surprisingly made the post-season after many wrote them off. Sure, the star players like Earl Thomas, Richard Sherman, and Kam Chancellor are all gone. But don’t get this twisted. As far as we’re concerned, Seattle has a top-five coach in Pete Carroll, a top-five quarterback in Russell Wilson, and the best linebacker in the league in Bobby Wagner. This roster is not as “appealing” compared to other teams, but Seattle is still elite in their own ways.

This game could either be a blow-out in favor for Seattle, or it could end up being a close match-up. Seattle is easily the better team, however, from past seasons, this team normally starts off slow. In week one, many teams are still trying to find out their identity. Don’t be surprised if this game is a little too close to comfort. The addition of Jadeveon Clowney bolsters this defensive line as it should give some trouble to Andy Dalton upfront. Expect a sluggish start from Seattle, however, we should fully expect them to beat this Bengals squad.

Despite the fact that the Steelers don’t have Le’Veon Bell or Antonio Brown anymore, this squad remains talented. With a receiver like JuJu Smith-Schuster and a quarterback like Ben Roethlisberger, this team remains in playoff contention. Seattle will most likely make major improvements from their week one performance. With that being said, playing on the road in Pittsburgh is no easy task. A huge question mark for this upcoming season for the Seahawks is their pass rush. Can they stop Big Ben? On the road, this early in the season, they’ll probably fall short.

This is easily one of the biggest and most important match-ups for the Seahawks all season long. With one of the Super Bowl favorites coming to Seattle, the Seahawks need to make a statement. Whenever people are discussing Super Bowl favorites, it’s the Patriots, Rams, Chiefs, Eagles, and Saints it seems. Change that narrative by beating the Saints. Simple as that. The Saints are the huge favorites in this game, but don’t get it twisted. Prime-time in Seattle? Have fun with that. The Seahawks strive when they’re doubted. New Orleans is a great team, no doubt, however, this is easily a trap game for them. Don’t be surprised if the Seahawks squeak this game out.

After a huge statement win against the New Orleans Saints, the Seahawks head to Arizona, in which they’ll face the rebuilding Arizona Cardinals. Rookie quarterback Kyler Murray is definitely an interesting prospect to say the least, however, we can fully expect Seattle to come away with the win. The momentum would definitely be shifting in favor for the Seahawks and it’s just easy to say that they’re the much better team than the Cardinals at the moment. Anything can happen though since it is a rivalry game, but expect Seattle to win this one easily.

Once again, Seattle is the massive underdog in this match-up. They’re facing the NFC Champs from last season as it seems that they’ve only gotten better with time. The Rams are stacked on multiple positions and are expected to make another Super Bowl run this season. Although the Rams are the huge favorites to win this game, don’t count Seattle out. Last year, the Seahawks put up over 30 points against the Rams in each game. Defense will win this game for Seattle as they have a chip on their shoulder from falling short to the Rams in the last few match-ups. Definitely expect them to give them a run for their money. Seattle wants their NFC West Division crown back.

The Cleveland Browns were one of the most busy teams during the offseason. They have a ton of talent on their team that features players like Odell Beckham Jr., Jarvis Landry, and Nick Chubb. After defeating two super bowl contenders, Seattle is looking to extend this win-streak to a fourth game. Unfortunately for them, traveling on the road to Cleveland to face an extremely talented team could spell doom for them. Cleveland could either be one of the best teams in the league, or they could end up being the most pathetic dumpster fire this season. On the offensive end, we can expect the Browns to put up many points. I think this is going to be Seattle’s wake-up call.

After a losing to the Cleveland Browns the previous week, expect Seattle to come out and play with grit. The Baltimore Ravens were one of the surprise teams last year as quarterback Lamar Jackson was able to lead them to the post-season. If Jackson can make a huge jump from last year, it’s definitely possible that he can give some trouble to the Seattle pass-rush. Expect this match-up to be a low scoring affair. Baltimore’s defense is easily one of the best in the league. Jackson will have a tough time playing in Seattle as he has never experienced being in a tough road environment. Expect the more experienced quarterback in Russell Wilson to pull out the victory in this one.

Atlanta definitely took a step back to the pack last year as their defense got decimated from injuries. They still have a great quarterback in Matt Ryan, as well as an elite wide-receiver in Julio Jones. This team is one of the more unpredictable teams in the league because they’ve never maintained being healthy for a full season. Atlanta is capable of making the Super Bowl, but at the same time, they could very well be a 6 win team. It seems that Seattle never plays well in Atlanta, so we can expect the Falcons to take this one. The Seahawks’ pass rush is the biggest question mark for this season and unfortunately, it just won’t be enough to stop Atlanta’s air attack.

It’s been awhile since Seattle has played against Tampa Bay. Last time these two teams met up, Russell Wilson probably had one of his worst games in his entire career. He threw two interceptions and was sacked six times by an up-and-coming Tampa Bay defense. That was in the past though and we can fully expect the Seahawks to take care of this game relatively easy. The Buccaneers are hoping that their quarterback in Jameis Winston is the one, but unfortunately for them, they’ll have to keep looking. Winston is not capable of taking a rebuilding team into Seattle and winning there. With the loss Seattle suffered to Atlanta last week, expect them to demolish this team.

After demolishing Tampa Bay the week before, expect Seattle to keep rolling. Just like Atlanta, San Francisco is one of the more unpredictable teams for this season. They could very well end up being a dark-horse for the wild-card or just be a complete dumpster fire. Either way, Seattle is the better team at the moment with more established. Seattle’s identity last year was to run the football, but with the worthy caliber of the 49ers’ defensive line, expect them to switch up their play-calling. Expect the Seahawks to win this one with Wilson having a huge game.

With the Seahawks having a bye-week, they should be prepared enough to face the Eagles in Philadelphia. The Eagles are extremely stacked in multiple positions as they are the huge favorites to win this game. Don’t get it twisted. Seattle can definitely surprise many as they have done so in the past. Unfortunately for Seattle, they’ll probably be a bit rusty from the bye-week. Eagles quarterback Carson Wentz is looking forward to having an MVP-caliber season and by wanting that, he’ll probably have a huge game. Once again, this game is a wake-up call for Seattle.

After losing to the Eagles in Philadelphia, the Seahawks return home to play the Minnesota Vikings. Last year, the Seahawks beat the Vikings in Seattle and we can expect the same story. Both of these teams are at least wild-card contenders as they want to make a statement. What this comes down to is the match-up between Russell Wilson and Kirk Cousins. Cousins should have a bounce-back season this year as he is more familiar with offense. But I wouldn’t put my money on Cousins to perform well in a pressure-like scenario. Wilson excels under pressure and we can fully expect once again for the Seahawks to defeat the Vikings in this match-up.

At this point of the season for both teams, this game could very well end up being the determining factor as to who wins the NFC West Division. The Rams do indeed have the better roster and I believe that they’re going to make a statement this time around. The representing NFC Champs from last year will want to remind folks about who runs the conference. Despite the fact that this is a road game for Seattle, they’re very cable of leaving Los Angeles with a win. Unfortunately for them, the Rams’ talent is just too much at this point. This will be a close match for most of the game, but expect the Rams to develop a comfortable fourth quarter lead which would lead to a win for them.

After losing a crucial match-up to the Rams the previous week, expect the Seahawks to demolish the Carolina Panthers. The Panthers are not that bad of a team, but at this point of the season, quarterback Cam Newton will probably not be playing. They’ll be out of playoff contention, and with that, Newton will undergo a shoulder surgery to begin the recovery process. The Seahawks are looking to bounce back in a big way and by demolishing the Panthers, they will have done so. Expect this to be the game in which Seattle starts a winning streak.

At this point of the season, quarterback Kyler Murray will have more experience under his belt. He will probably have a decent game against Seattle. Unfortunately for him, playing in Century Link Field will be one of the biggest nightmares for him. At this point of the season, Seattle will probably be playing for a wild-card as they want home-field advantage in that match-up. In order to do that, their goal needs to be to win every game from this point on. The Cardinals will probably be tanking anyways so expect Seattle to win this one comfortably.

San Francisco is looking for some revenge as they lost to Seattle earlier this season. Unfortunately for them, they’ll be facing a highly-motivated team this time around of the season. At this point of the season, the Seahawks will be playing for home-field advantage, if not the playoffs. Many people have high hopes for the 49ers, but having a good roster on paper is different than putting it out there on the field. The last time the 49ers were in Seattle to play the Seahawks, they got blown out. Expect a similar result this time around.

With that being said, don’t be surprised to see the Seahawks at 11-5 this year. They’re very capable of not only being a wild-card team, but a contender in the NFC. Once people start sleeping on them, that’s when they strike. With an improved offensive line and a running-game with Chris Carson, the Seahawks should be able to have more consistency on the offensive end. Their young players should take a step up this season as well as their veterans. This team has the potential to be very dangerous so it’d be smart to not doubt them this time around.