Midcard Title Will Be Introduce in AEW 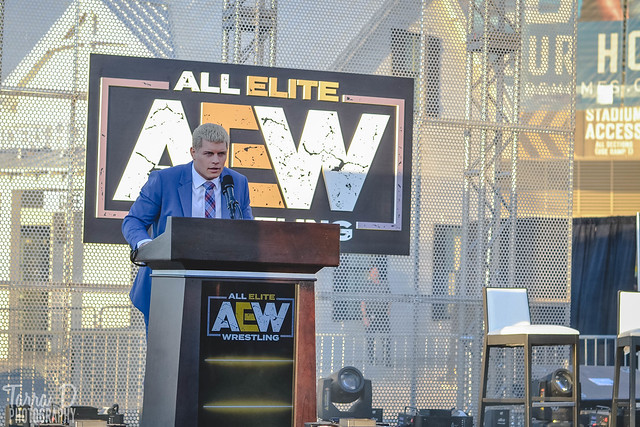 Midcard Title Will Be Introduce in AEW

Midcard Title for AEW may be coming soon; hinted by the “American Nightmare” Cody Rhodes, who is also the Executive Vice President of the Company. And he is about to face Chris “the Bubbly” Jericho for the World Heavyweight Championship match.

What Secondary title is AEW bringing?

Cody Rhodes did give the fans what the company may be bringing in the near future.

“There’s a title we’re considering, and it’s something people can probably guess since we’re going to be on TV, hint hint, but there are no plans for it at the moment. Right now we revolve around the AEW Championship and in D.C. we’re going to name the first-ever AEW Women’s Champion, and that’s such a beautiful belt. I don’t know if people know, up close, that rose gold is layered into it. Brandi, Kenny Omega, and Tony did a great job getting that title. There’s going to be some guidelines laid out for whoever wins that title though,” he laughed. “Some guidelines about how they’re supposed to take care of it.”

The Classic title is coming back to life soon

The Television title was typically defended in matches with “ten or fifteen” minute time limits and has time limit draws. The first NWA/WCW TV Championship was held by the late Danny Miller and the longest holder being the late Paul Jones.

Other title holders are Scott Steiner, Booker T (the most reigns), Arn Anderson (4-time holder with 870 days); Jim Duggan being the last holder who found it in the dumpster after Scott Hall threw it away. So we now know who will present the title if AEW plans to bring the title in.

Is the TV title worthy as their secondary title?

This title is mostly made for “Heel Wrestlers” to create heat and it’s screaming MJF’s name all over it. Imagine what he can do with it once he gets it, just like the Rock and Stone Cold Steve Austin did with the Intercontinental title. Think about that AEW and Cody Rhodes!

And they are now planning to introduce the oddly shaped Women’s Championship title and the Tag Team titles; once the tag titles roll around, I won’t be surprised to see the Broken Hardys in AEW.

But for the woman’s champion, it look great but I think they should do something with that oddly shaped centerpiece; a bit high horizontally for a woman’s waist; can’t even see clearly what written on the bottom.

Still way better than the WWE Women’s Champion, that’s for sure! So what do you think about Cody’s comment on bringing in the classic TV title to the AEW?

Chris Jericho Having A Crisis With The AEW Heavyweight Championship Title
Jose Canseco To Make Pro Wrestling Debut
%d bloggers like this: