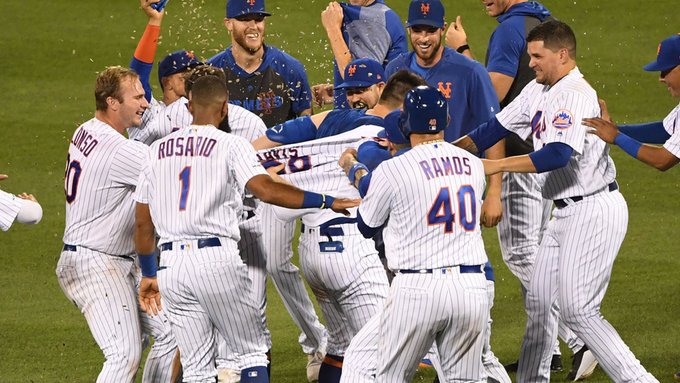 September baseball is finally here. With rosters expanded and playoff hopes on the line, this year’s September baseball will not disappoint. The New York Mets are no exception to that. At 70-67, the Mets are just seven games away from matching their entire win total from last year. They are also still in the NL Wild Card mix as they sit just 4.0 GB of the Cubs. This home stretch of games will be the true test for the Mets to show if they are actually for real come time for October baseball.

Put Your Money Where Your Mouth Is

When the Mets hired Brodie Van Wagenen to be their new General Manager, he opened with a message to the NL East. “Come Get Us.” As he said as the All-Star Break, the NL East did come and get them. However, even though a division title is presumably out of the question, the Mets are still alive for a playoff birth. They have set themselves up in a perfect position. So perfect in fact, they are one game better (based on record) right now then they were at this time in 2016.

Also working to their benefit is the Mets schedule. Of the 25 games left for them to play, all are at Citi Field except for six (three in Colorado and three in Cincinnati). In addition, only six of those games are against division leaders (the Dodgers and Braves). All of the other teams they face are losing teams or they are similar in the standings to the Mets. This final stretch will be a huge statement for Brodie and the Mets to make if they can, in fact, find themselves playing in October, and if they can in fact back up the talk.

Who Are The Mets Looking For To Lead The Way?

Of course, the Mets are looking at their pitching to keep them in games, however, their offense needs to back them up in order to win those games. Some names to look at are Wilson Ramos, Pete Alonso, Brandon Nimmo, and J.D. Davis.

Ramos entered play today with a 25-game hit streak. The longest streak by far in the Majors this year. After a slow start to the year, Ramos is starting to show to Mets fans that his early-season struggles meant nothing.

Pete Alonso is perhaps the biggest name in the Mets lineup. The rookie sensation has had an unbelievable year. From clutch hits to his home run barrage, Alonso is the biggest piece in the Mets October run. He is a leader on this team and is leading the way for the Mets to reach the playoffs.

Brandon Nimmo is a bit of a dark-horse. After just coming back from injury (he has been out since May), no one really knows how he will produce. His hustle and presence were certainly missing in the Mets lineup, but if they can get even half of how Nimmo performed last year, the Mets outfield is so much more dangerous with Nimmo, Conforto, and J.D. Davis.

J.D. Davis, like Pete Alonso, has been leading the Mets late-season charge. Though he has cooled off a little lately, Davis has been amazing for the Mets lately. Without a doubt, he was one of if not the best acquisition from this past offseason for the Mets. His career-year is certainly worth noting.

To Mets fans, this is it. After they looked dead in the water, the Mets have come back to life and are playing meaningful games in September. This what we wanted in Spring Training. It’s time to get up, get loud, get out to Citi Field, and get behind this team to get them to the playoffs. Let’s Go Mets!!!!