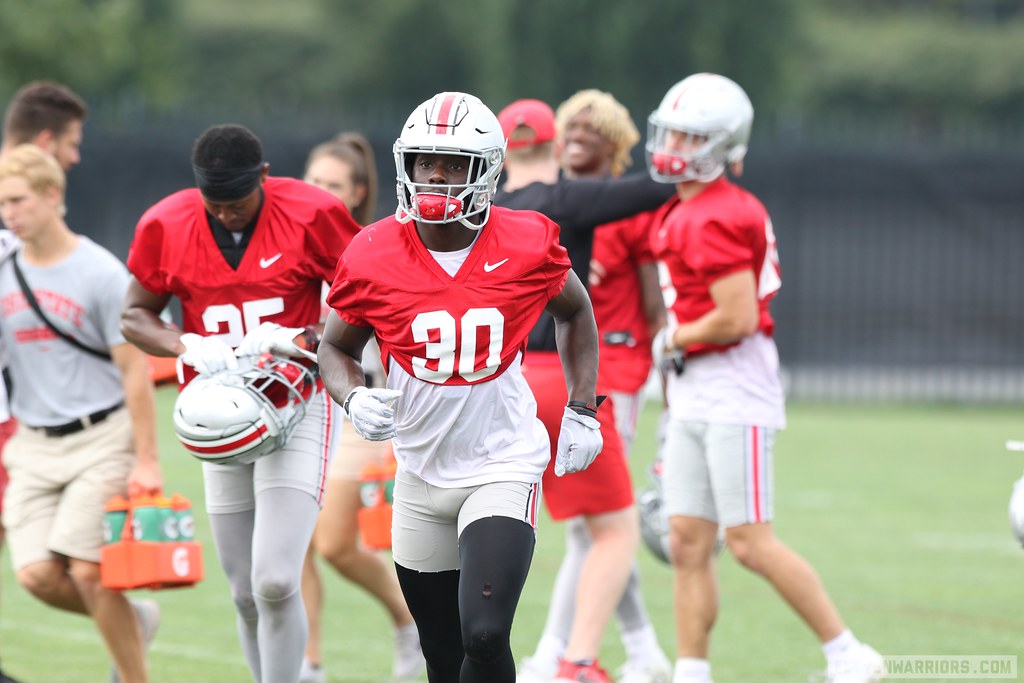 The Ohio State Buckeyes will enter this season with a new head coach and quarter back. Ryan Day has taken over head coaching duties. Meanwhile, Dwayne Haskins is in the NFL. The Buckeyes will look to remain dominant even after the changes.

This season, the Buckeyes will look at another quarterback manning the offense and somewhat a transformation. Dwayne Haskins is with the Washington Redskins now and the starting quarterback position is up for grabs. On the other hand, sophomore transfer Justin Fields has been granted immediate eligibility by the NCAA and will be the starter. Besides Fields, the Buckeyes’ will have some familiar faces returning to the field. At running back, J.K Dobbins has already solidified his spot as starter. However, coach Tony Alford has made it clear that there is still a position battle for the backup roles. As for the back up roles, Demario McCall will be in the second string position and freshman Marcus Crowley currently places in the third string slot.

On the other hand, having a solid offensive line would only help make Fields better. Likewise, the Buckeyes’ issue this season is they’re lacking experience up front. The lone returning starter is left tackle Thayer Munford. At left guard, Jonah Jackson should land the starting spot as a graduate transfer. At center, redshirt sophomore Josh Myers will get the nod. Furthermore, Myers was originally recruited as a guard. On the other hand, the Buckeyes slid him over to center. At the right guard position, redshirt sophomore Wyatt Davis looks to fulfill that role. In many ways, it only makes sense for Davis to step up considering he served as the backup to Demetrius Knox last season. Lastly, the right tackle position should see Nicholas Petit-Frere, a redshirt freshman get the nod. Furthermore, when it comes to the receiving end of the spectrum. K.J. Hill returns.

However, Hill is the Buckeyes’ only experienced starter. On the other hand, Austin Mack and Binjimen Victor have experience too. Furthermore, there are two talented young receivers in Chris Olave and Garrett Wilson whom are good enough to play.

On the defensive side of the football, Ohio State has their deepest unit by far., Chase Young, Jonathan Cooper and Robert Landers all return as starters. Davon Hamilton should land the other defensive tackle job. However, Jashon Cornell has been giving Hamilton a run for his money. The scary issue about this defensive line is there has been guys rotating in different spots on the line to make it a versatile line.

At linebacker, Malik Harrison will be one of two starting Outside linebackers. Tuf Borland spent most of spring practice injured but the way things are scoping out is Borland will be the starting middle linebacker. Pete Werner will be the other outside linebacker. The Buckeyes’ have been working on a new bullet/hybrid position during the spring and Brendon White will start there. At cornerback, Jeffery Okudah will be the top corner. Meanwhile, Damon Arnette returns too. Lastly, at safety, Jordan Fuller is the top guy despite not practicing all spring. Brendon White will play opposite when two safeties are on the field.

This Ohio State team can be dangerous. Bold prediction, Justin Fields lights up the offense and the Buckeyes’ win the Big Ten East and perhaps land a spot in the CFP.

The Buckeyes’ have a mixture of talent and experience with not-so-much experience too. If things fall into place, Ohio State could be the lucky team in the Big Ten East.